Optipower makes a great safety-product for us heliflyers, the Ultra Guard 430. The operation is very straight forward:

Now, in case of BEC-, ESC-, or battery-failure where You would normally crash since there’s no power to RX and gyro the Ultra Guard gives power to RX, gyro and servos so You can (hopefully) do a controlled autorotation and save the heli.

After intentional disconnection of power You have to press the button on the Ultra Guard to shut it off. And this is boring. So we need to address that in the usual way, and that means Jeti-way.

Jeti is capable of sending a logic output of high / low on selected RX-output. Since the current available on that output is very low (rated to 1 mA according documentation of RX-firmware 3.22) we cannot for example drive a relay straight on that. So we need to do some thinking.

Solution is to make a logic-board and drive the on-off circuit to external equipment as a fet.

NOTE: The board is now available to buy as new version from shop!

Since I know nothing about making anything I contacted a friend on IRC (as I have many times before) to discuss the subject. Our conversations are almost always the same:

And after some weeks he has ready made PCB’s home and few days later I get letter with some parts to solder. I like the teamwork :)

Only difference this time was that it was SMD-components. Darn small… Surprisingly enough I got it together, tested and it works :)

Here’s the picture of complete setup, the new PCB is the smaller one. And it’s SMALL. Compare it to the normal-sized 2S LiPo balance connector on the left and You’ll get the idea.

There’s possibility to make a “Plug’n’Play”-version also, easier to install and not so permanent installation. 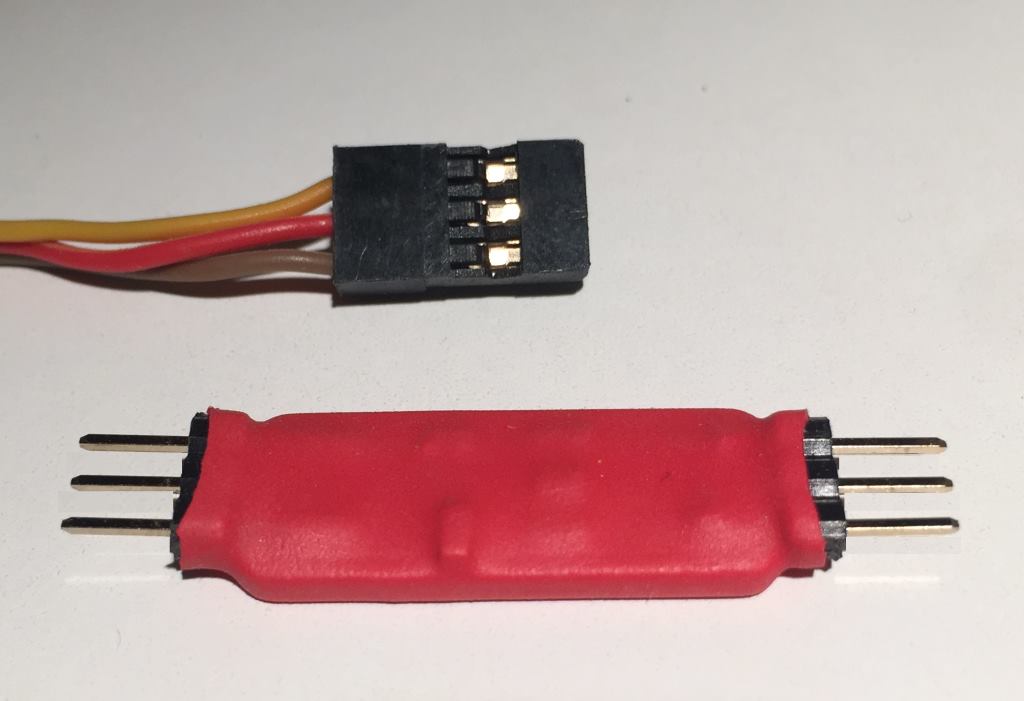 In my Logo 800 this isn’t mandatory since the unit can be placed so I have access to physical off-switch. In my TRex 500 situation is different. Since I really hateany visible wires and usually crahs with this heli quite a lot the only good place for the unit is inside the frame. And since the ultra guard’s 2S battery need’s to be disconnected if I’m not flying for a week the placement becomes tricky since the off-switch and lipo-connector are on opposite ends of the unit. This little gizmo let’s me place the ultra guard so I have to have only the battery-connector end visible.

Obviously there’s a need for safety, the off-function have to be prohibited in flight. This is the easy part. There’s a few steps to make this work, let’s do a rundown of terms:

I have a dual-hold setup in my transmitter, the “normal” hold I’m using is a two-way switch (Sg). used just as hold-mode is used. I have an additional two-way lock-switch (Sf) I’m using to add safety. When powering heli the “lock-hold” is always on, increasing safety since it’s practically impossible to switch this off unintentionally. I switch this off when heli is ready on the platform to take-off.

Therefore I have a logical switch for the normal hold-mode like “Sf OR Sg”, this does not work in this case since I want the ultra power switch-off to work only if both switches are used. Paranoid maybe, but it is safety we are talking about. So, there’s a logical switch “Sf AND Sg” for this. (L7 in screenshot) 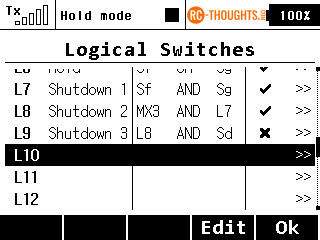 Next needed logical switch is the rule for “If both hold-switches are on and heli is unpowered” (L8), there’s a telemetry switch to take care of that. The rule is pretty straight-forward. control MX3 is true if flight-battery voltage have been under 2 volt’s for longer than 0,5 seconds. 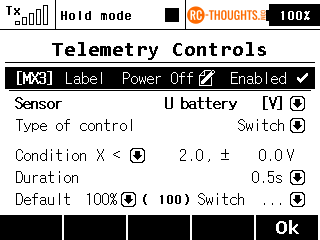 Third rule (L9) in logical switches ties it all together, meaning “if heli is unpowered, both hold-switches are active and user activates shutdown-switch (Sd)”

So, now we have the rules, we need to activate the output for about 1.5 seconds. If activated longer ultra guard goes to discharge-mode. Therefore we need to make sequence. 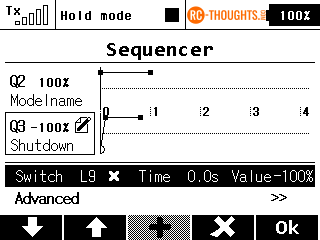 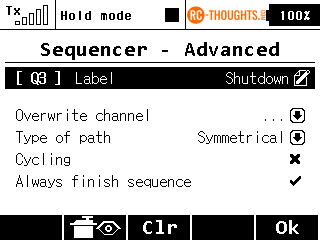 This was the function. All we need to do now is to make sure we have a signal to give for the newly added PCB. That means we need to make one output of receiver to “Output” instead of the normal “Servo”.

We need to have a bound receiver to do this, meaning heli need’s to be powered. Go to “Device Explorer” -> “Alternative Pin config”: 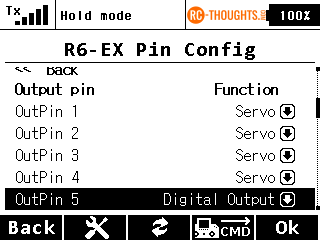 Change the physical output You’re going to use in receiver to “Digital Output”. After that we need to bind the receiver output to a channel in radio. First, go to “Servo Assignment”: 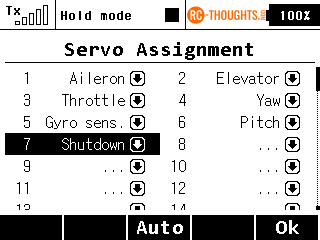 Take a free channel and name it for example “Shutdown”, in my case it’s channel 7. Next step is to make sure transmitter’s channel 7 is configured to receiver’s output 5, so go once again to Device Explorer and to “Receiver Outpus”: 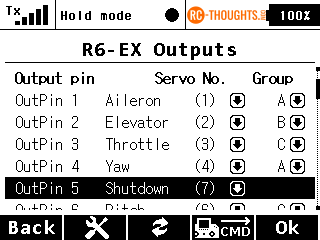 Here You’ll configure physical output 5 to be controlled by channel 7 named “Shutdown”. Last step is to configure the way we control channel 7. Go to “Functions Assignment”: 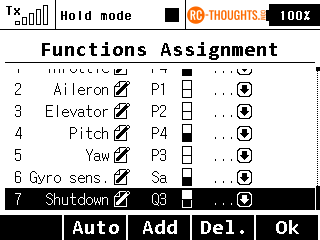 This is simple, make the channel 7 named “Shutdown” to be activated by the sequence You made earlier, in my case Q3.

All that is left is to go to servo monitor and check the function. Put both hold-switches to hold-position, make sure heli is unpowered (RX running from ultra power) and flip the switch. Watch the magic happen :)

Since laziness is the mother of good inventions You can now turn off Your backup power with a flip on the switch and smile to Your fellow-flyers who are fumbling for the tiny switch in the Ultra Power placed uncomfortably somewhere in the heli :)

Video of function in action: