Ever since I put Phoenix Simulator downloads to RCT there’s been quite a lot questions of installation and updating. I’m by no means a Phoenix Support or know everything but here’s a small guide on how to install Phoenix Sim from scratch and update it to 6.0. I also point out how to install those extra models that are available.

In order to use Phoenix you will need a dongle. These are widely available in Ebay, search for “22 in 1 simulator” and look for PhoenixRC compatible dongle with suitable adapter cables to your radio. Or make it wireless connecting a receiver to it, receiver can be powered with USB.

You can also use any joystick or anything else that is seen as joystick if you use a emulator. Download the emulator HERE and check THIS video on how to use it. As an example Spektrum WS2000 works fine.

Note: Installation pictures are from Windows 10, installation is not that different for you Windows 7 users.

After you have downloaded the 5.5 DVD extract it and run the setup:

If you want to install Phoenix Sim to alternative location specify it here (It takes ~3Gb of space), when happy press Continue:

Sit back and wait for a while:

After installation is done press the Finished-button, leave the check mark to start Phoenix Sim immediately:

Phoenix Sim will start with version 5.5 g, seen in the lower left corner: 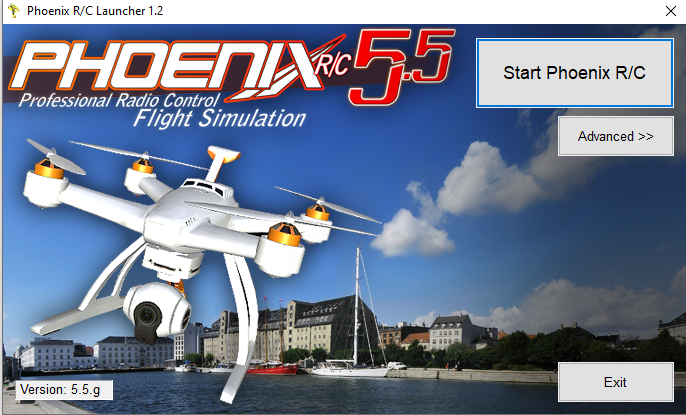 Updating to Phoenix Sim to version 6.0

In the start screen press Advanced and then the Install an update button: 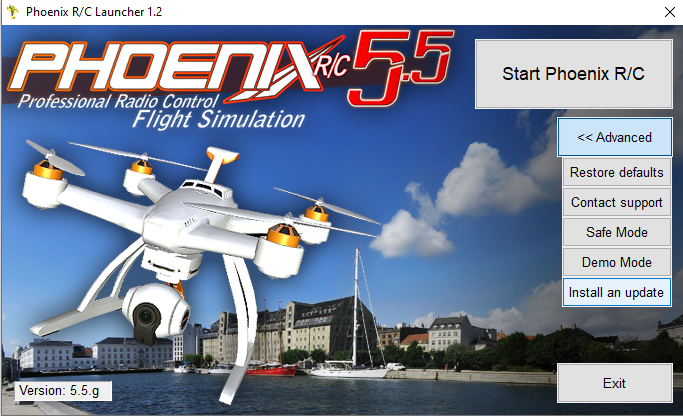 Since we cannot update straight to 6.0 we need to do the update in steps. First point the installation to the “PhoenixRC_5.0.a_5.5.k_update.pkg” file: 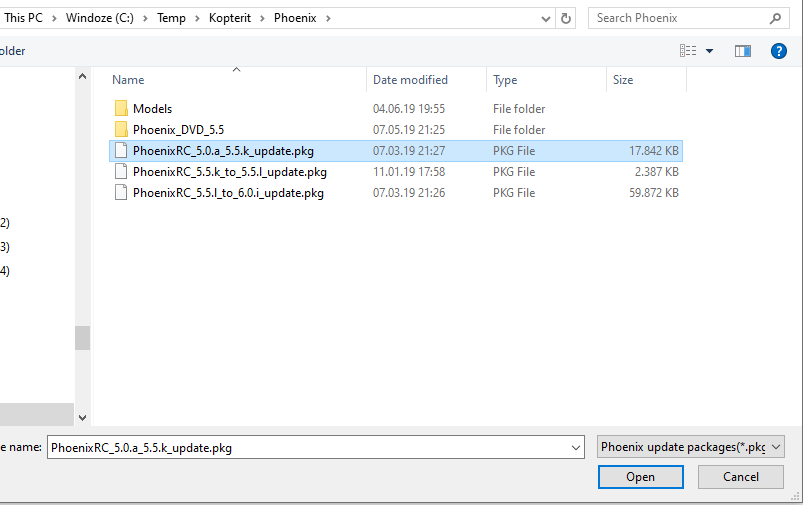 After the update you can see the version in lower left corner is now 5.5 k: 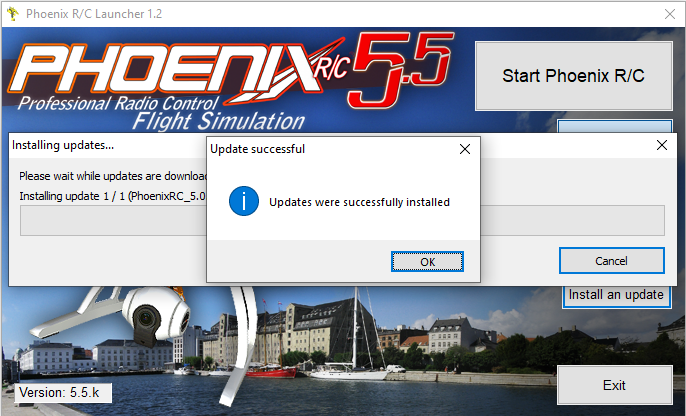 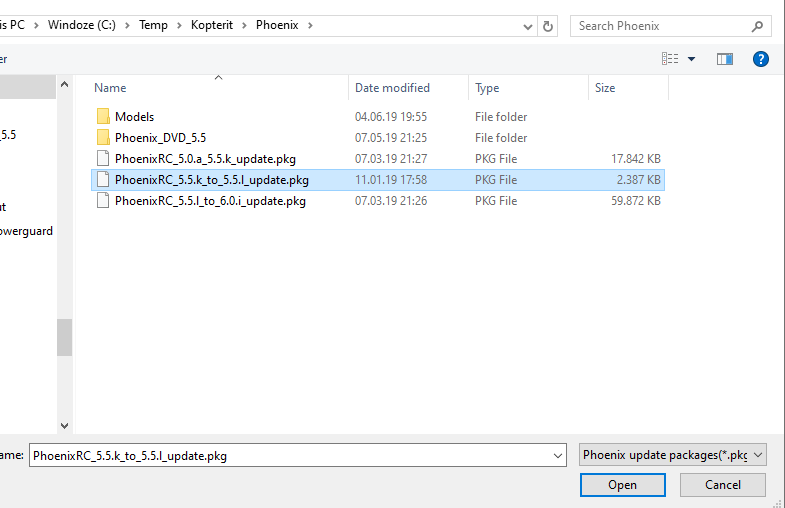 Again, after the update you have version 5.5 l: 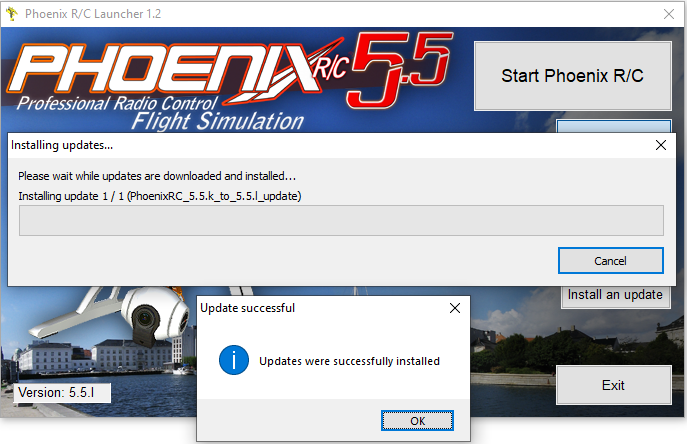 After this update you will see a bit different screen, wait for Phoenix Sim to finish searching for updates: 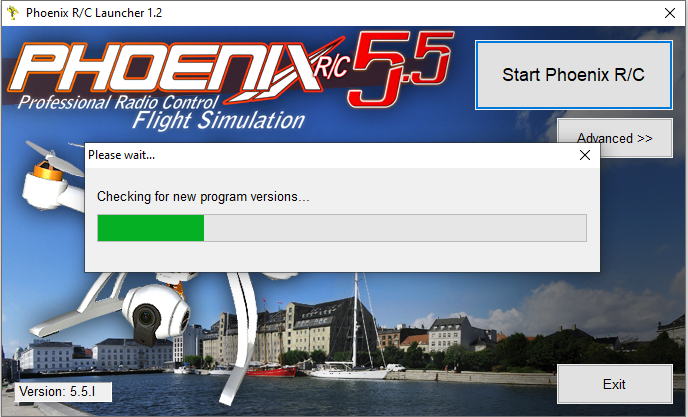 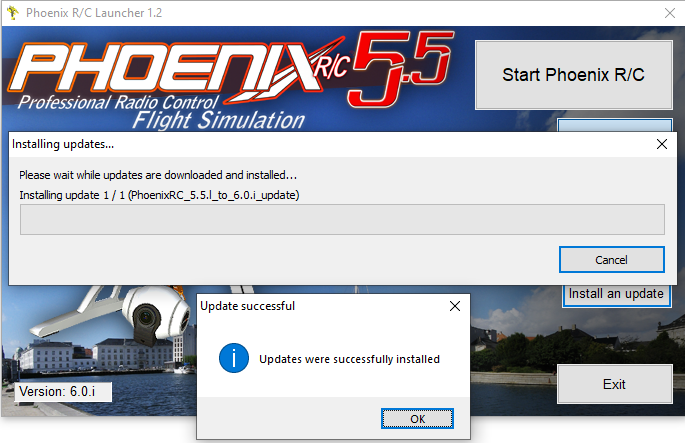 Note: After this update I recommend to Exit Phoenix Sim and restart it. Result is a installed Phoenix Sim with version 6.0 i: 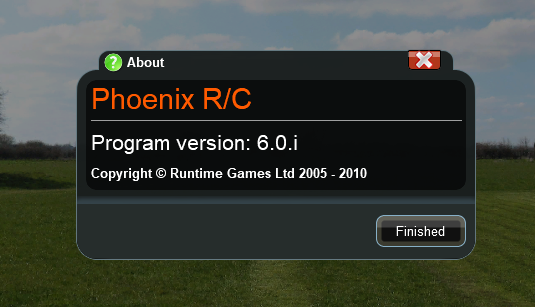 Now all you need to do is to setup your controlled just as before.

Installing models is easy. If your model is a .pkg-file you install it the same way you install Phoenix Sim updates, via the start screen’s Install a update -button:

If you have a .phx file instead you should copy the file to “C:\Users\<YOUR NAME>\Documents\PhoenixRC\Downloaded\Models\User-Made”:

And this will result in new model in Phoenix Sim: 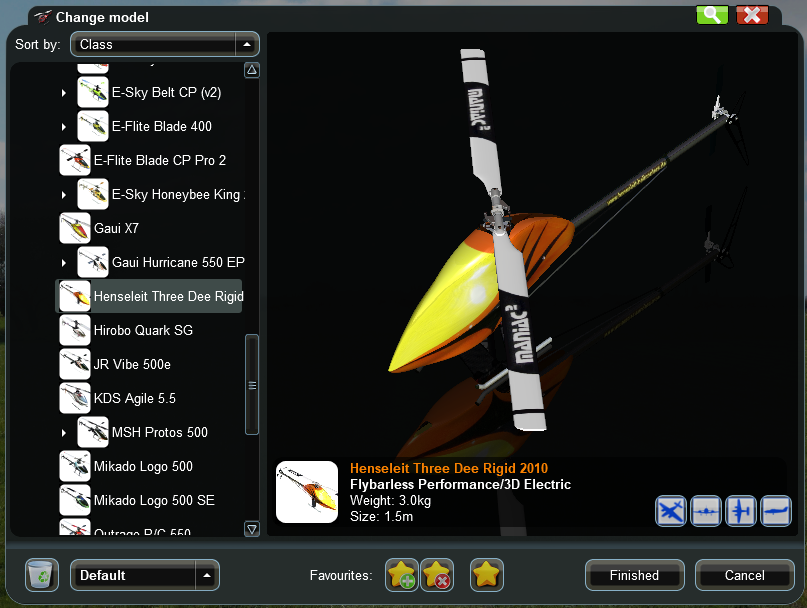 Note that the procedure is the same for added flying fields, only the directory is different: C:\Users\<YOUR NAME>\Documents\PhoenixRC\Downloaded\Sites\User-Made”

While it ain’t the newest, shiniest and most advanced Phoenix Sim still is a Sim to count on. Due age it does not demand that much power from the computer and runs nicely on a bit older comp’s. Have fun with it!

Note that I am by no means a Phoenix Sim guru. I just host the files so people still can find them. Most often asked question is “does it run on Windows 10?” and the answer i can give “Well yes, at least it runs on my Win10. Install with “Run as administrator” and you should be fine.” All support questions should be asked on Phoenix-related forums like the one on Helifreak HERE as for example.