How to make a charger-case with the attitude “the last charger case I’ll ever need”?

Well, this is one approach to that :)

When I started the rc-hobby I did what most do in the beginning, buy a small and under-powered charger from HobbyKing or some similar place. It took a few months until I understood that that’s not gonna cut it so I got myself some bigger chargers. And since it’s a lot easier to transport everything I built those in to a pelican-case like so many others.

Some time past, and I got myself a bigger charger because I got the Logo 800 that uses 7S batteries. So far so good. So I needed more power and channels and got myself an iCharger 4010DUO and quickly understood that not only is it butt-ugly but also not so intuitive to use when using different sizes of batteries and / or charging currents.

So, the case number three had to be built. I was somewhat fed up with the constant building so I thought that “I’ll make the last case I’ll ever need”.

The name “TheSalkku 3.0” would be like “TheCase 3.0” translated to english.

Requirements were quite simple:

Since I wanted to hide the “Nintendo” as we call 4010 here in Finland and house the power-supplies in one case the choice of case became obvious, it was gonna be a flight-case. After doing some measurements off to internet and do some shopping, a week later the build began.

About a minute after the case arrived it already had holes for intake- and exhaust fans: 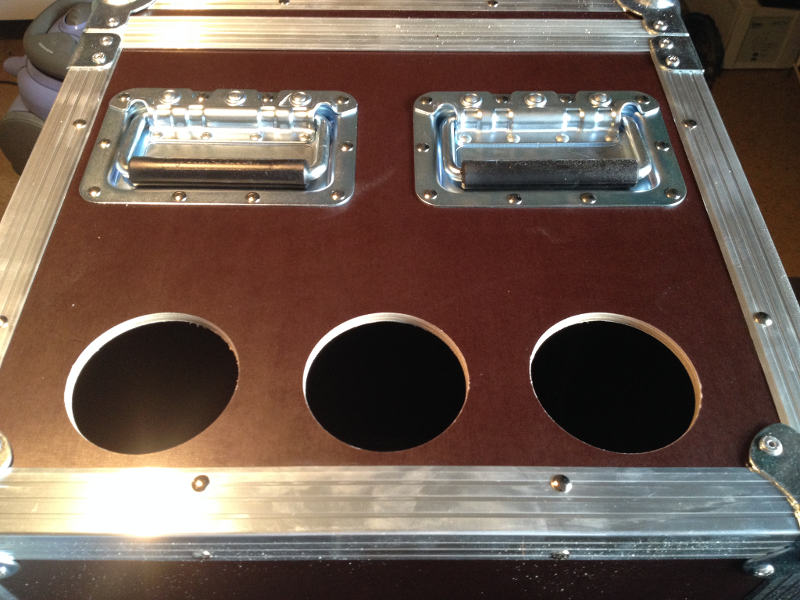 I chose 80 x 80 mm 12VDC fans with “enough” cfm capacity, three for intake and three for exhaust. I already had tested 4010 and knew it needs quite a lot of cooling when charging at 2000 watts. Later I had to add two in the rear of the case to get the 4010’s hot air straight out. Now the exhaust air on the right side of the case is about 5 degrees centigrade more than ambient, regardless of ambient temperature. Fully acceptable. 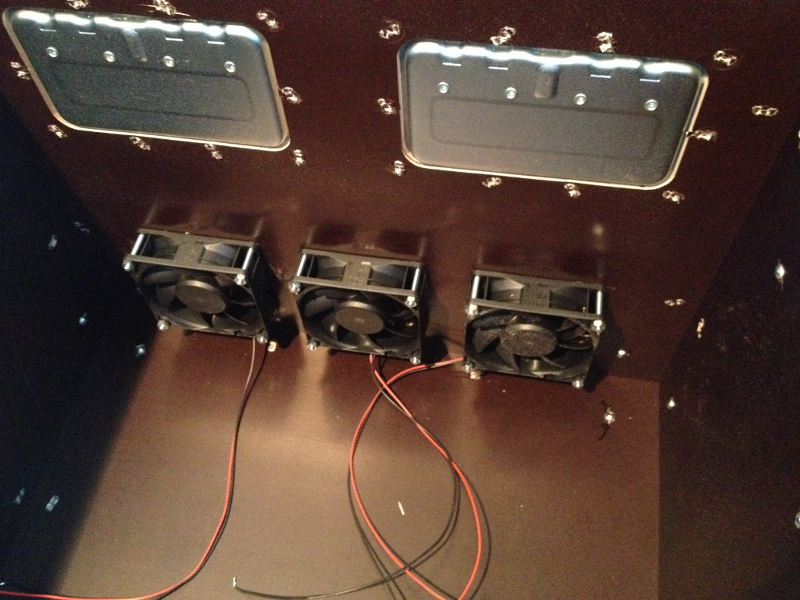 Since there’s hardly ever totally dust-free air on flying-field I installed dust-guards on every fan: 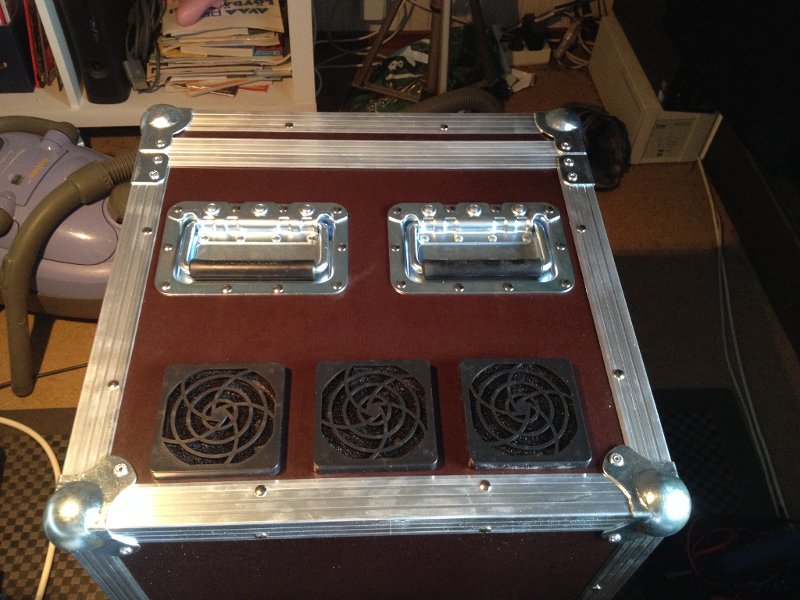 Planning of the layout was the hard part. The screen should be easily accessible, connecting and disconnecting batteries should be easy and also safe minimizing the possibility to understand something wrong. After doing some more measurements this became the choice, plenty of room for batteries and safe, since the layout of channel 1 and channel 2 would be “left” and “right” one have to be pretty stupid to connect something wrong.

Planning the inner parts and building supporting frame-structure going on here. Power-supplies on the bottom to keep the center of gravity low enough for easy transporting, the 4010 itself raised so it is easily accessible in case of control-software breaks and so on. 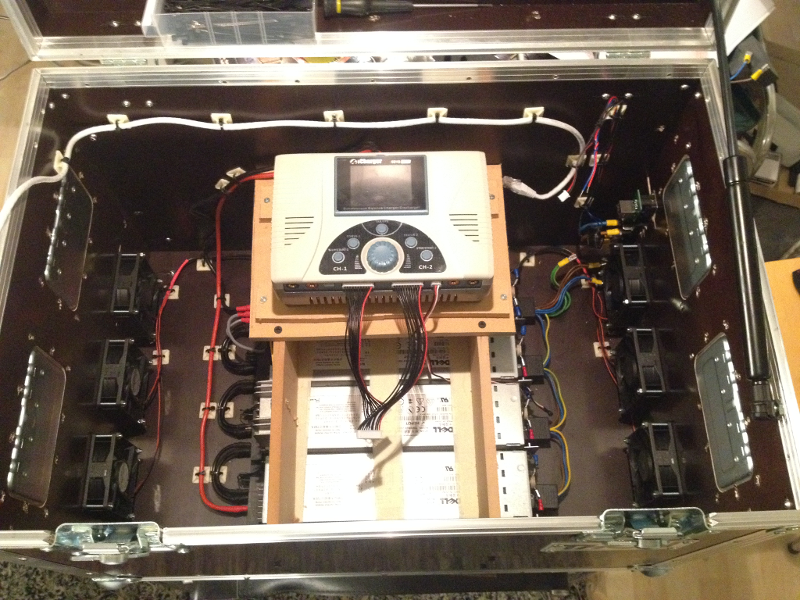 The connectors were done from M3 rod soldered to EC3 and EC5 (All my stuff is on them) with 4 of each on each channel. That means I can charge 4 batteries of same type per channel at the same time. 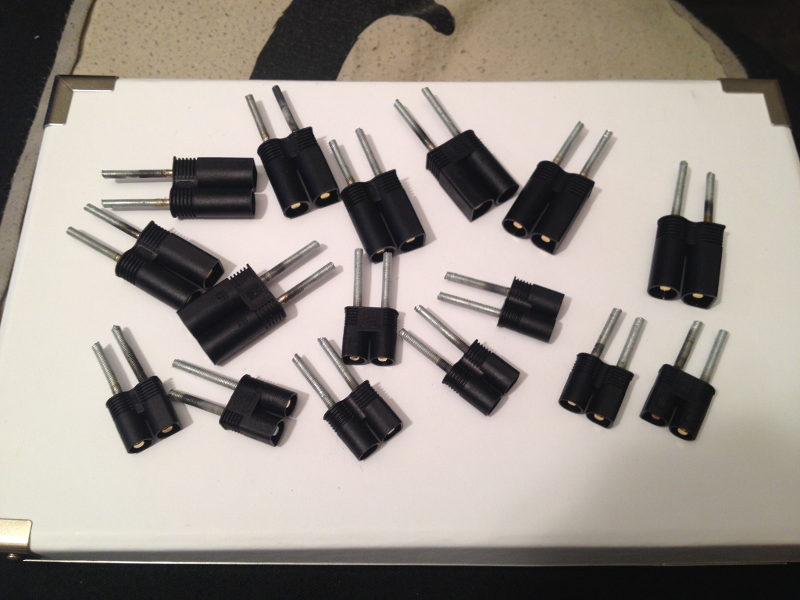 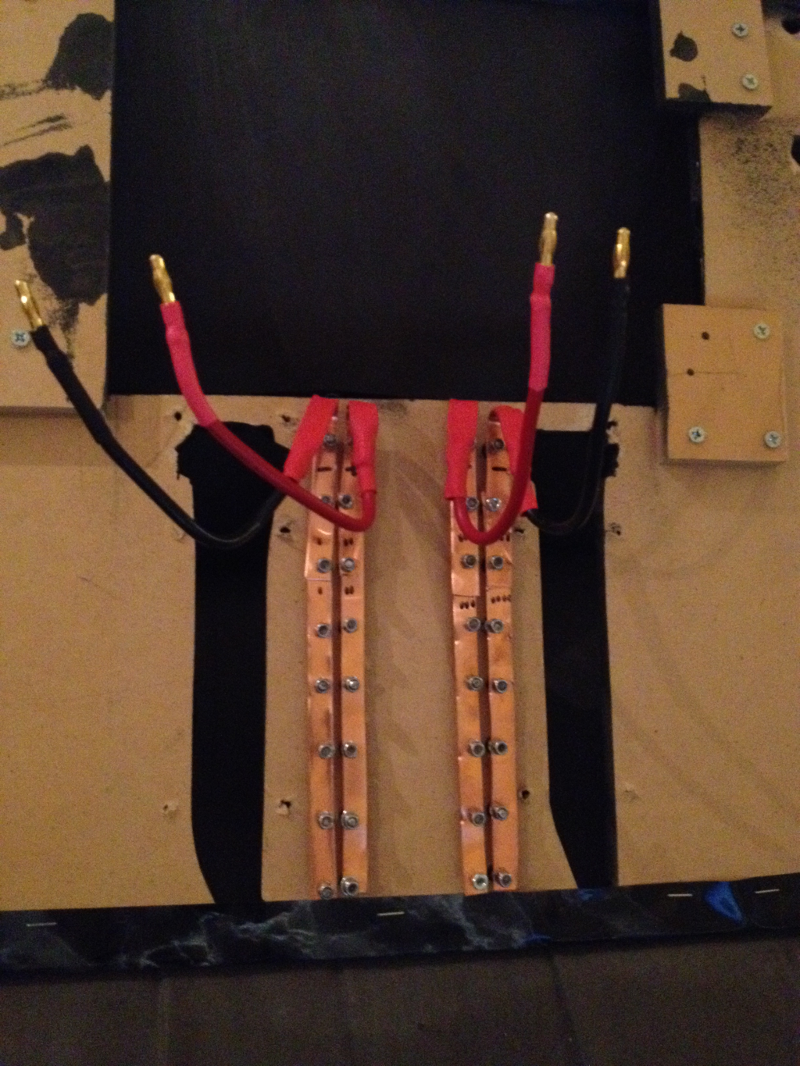 After some final touches the “business end” looks like this. (It’s not crooked, angle of photo is wrong) 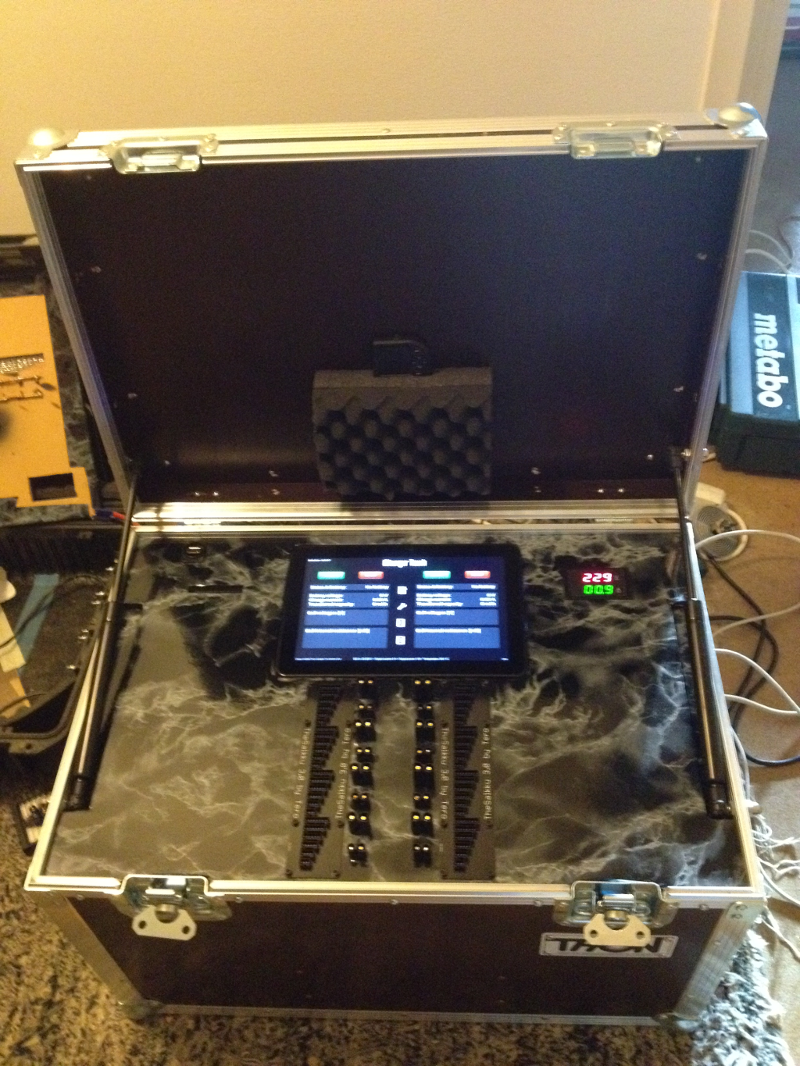 And the current shape for 2015 season, with new screen: (No, screen is not THAT reflective) 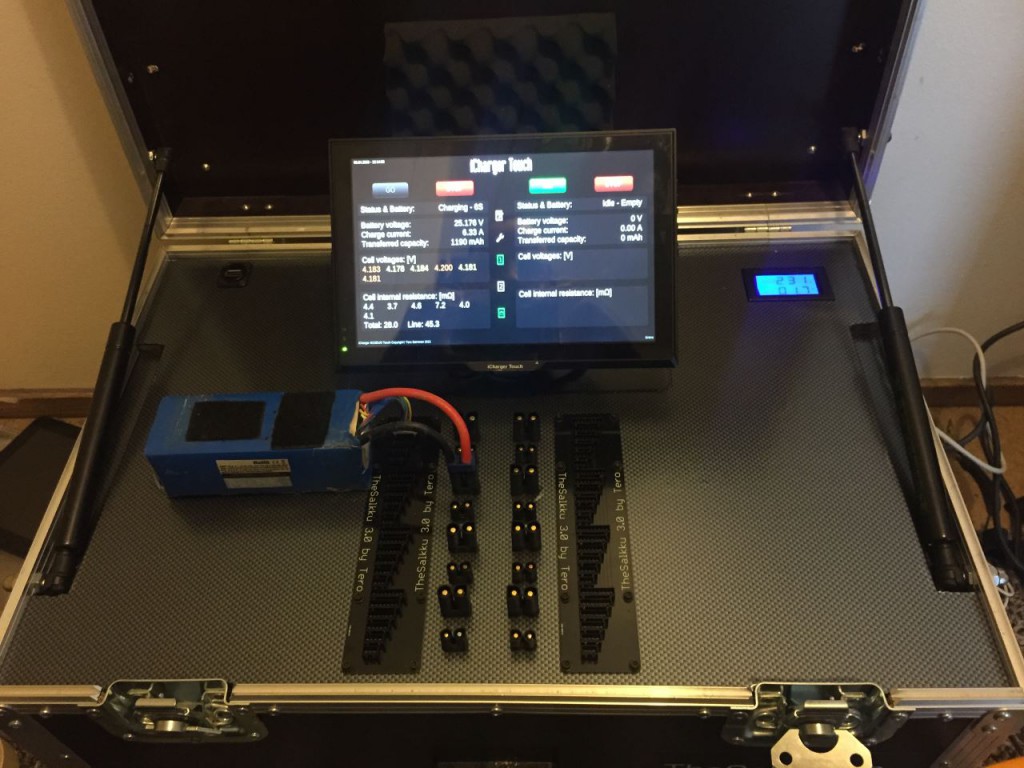 Balancer boards are of my design, got help from a friend who’s good in drawing PCB’s so with a great help from him I got 10 pieces of those and soldered the connectors. Boards are excellent and definitely strong enough. I once messed up a battery-connection, the board did not take any damage, the connector melted… 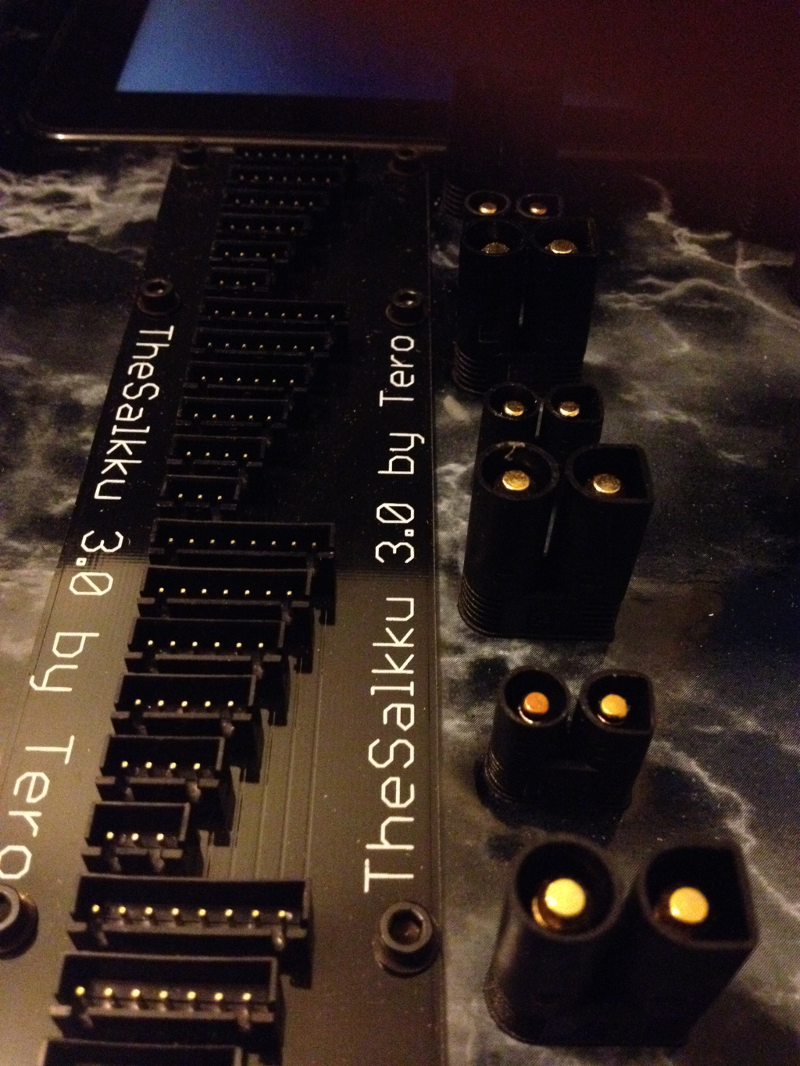 Some details on the case are charging dock for the phone, WiFi (control the interface with phone or tablet, no need to get up from field-chair) and extra USB-output for charging friends phones etc. 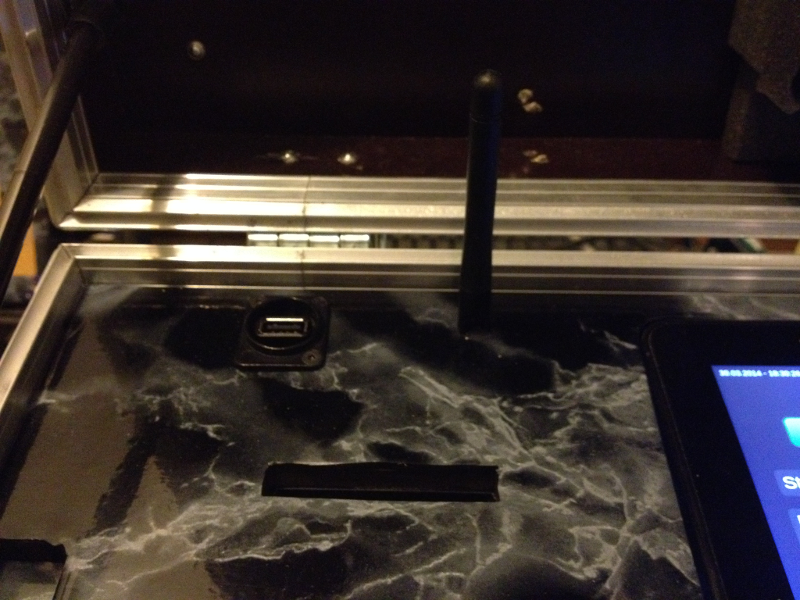 And just in case I need to do some coding or whatever I got myself an small wireless mousepad-keyboard. Works like a charm. Also visible is the mains voltage- and current display. 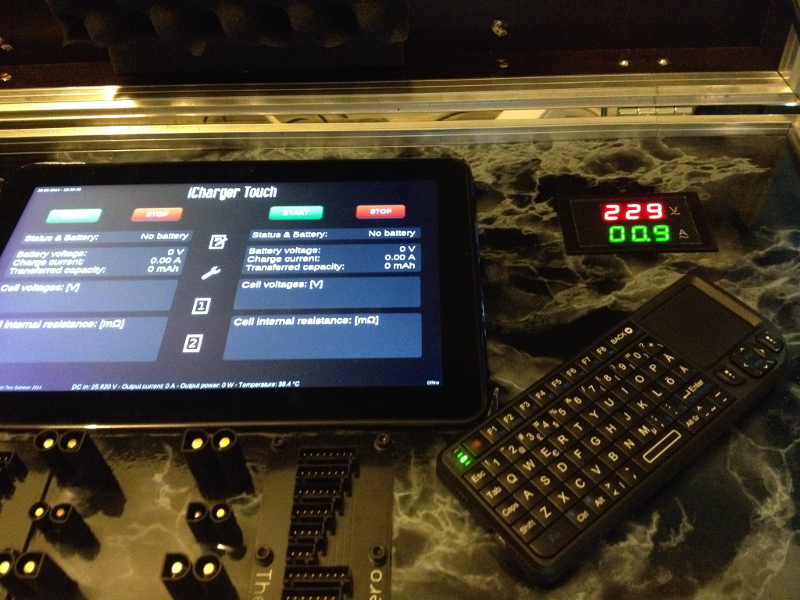 As stated before the wires should be as few and hidden as possible, so input power and network (used when home) are on the right lower side out of way. 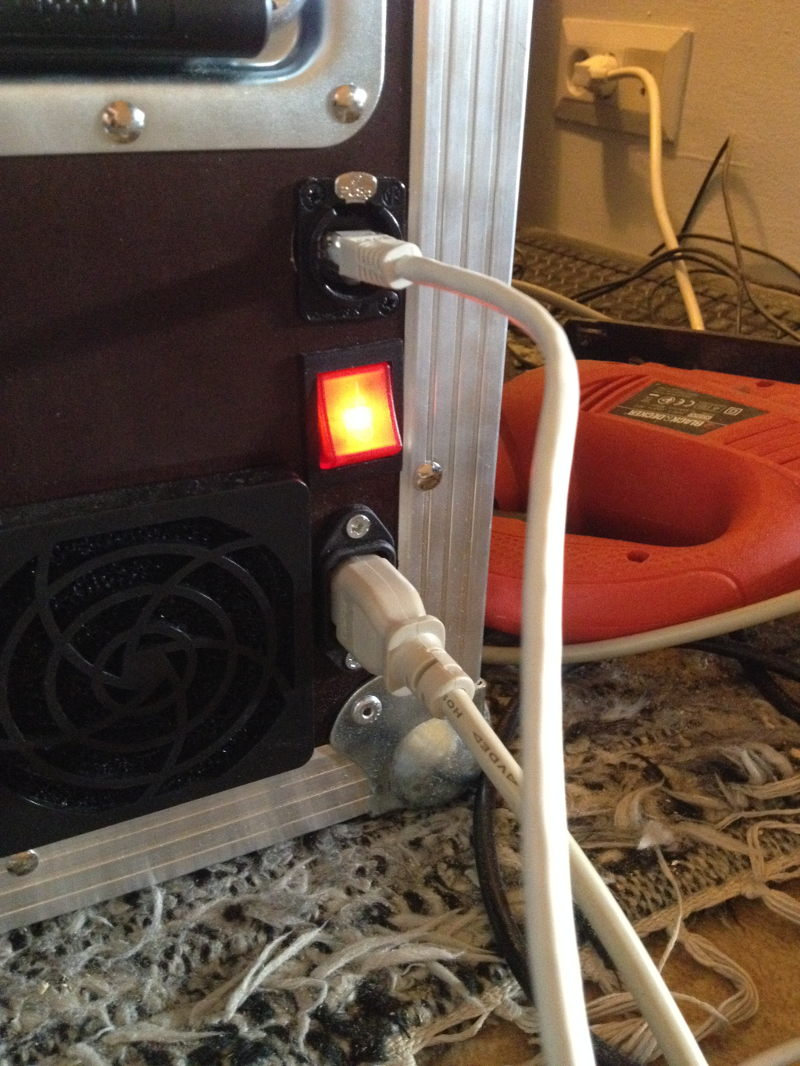 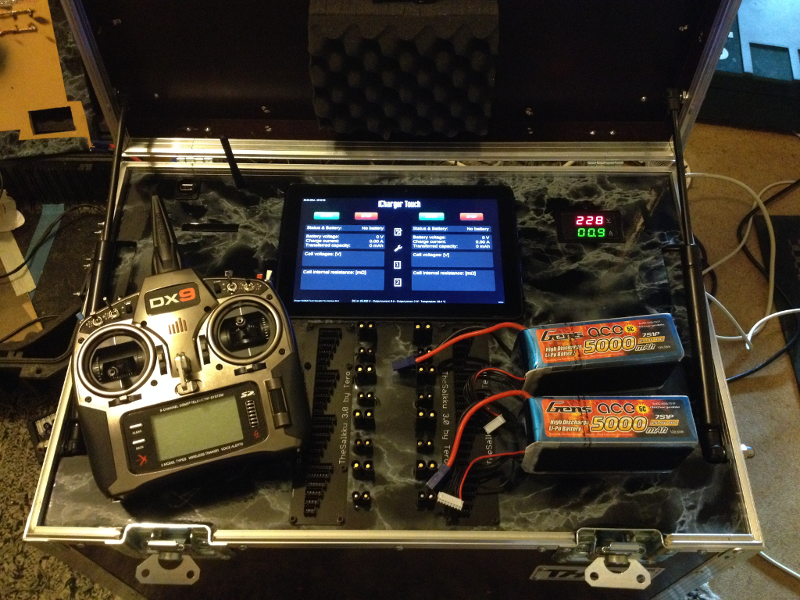 The mechanism is good to keep the lid open in wind if there’s some on the field. I’ll admit those were added almost solely for effect-purposes :)

Read about the software on dedicated page here.

Case have been in field-test for about a year now, apart some small glitches (almost all my own code-related) it’s been flawless. Absolutely great on the field and fast to use. Software is quite much updated for 2015 season especially “under the hood” so let’s see how it behaves during 2015 season :)