Purpose of this article is to examine how the newly introduced 900MHz backup-link could be used in model helicopters equipped with gyros using UDI-signal (Universal Digital Input).

The way Jeti gives us the usage of 900MHz is aimed for servo-use, that meaning the PPM-signal coming from RSat900 is divided to receivers servo-outputs. This of course does not work well with today’s gyros since they most often use some sort of sum-signals. Most common sum-signals used are PPM and UDI so let’s examine them.

Equipment used in the article: 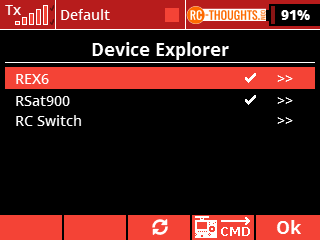 RSat900 is sending PPM Positive out from E1 to REX6 E1 configured as PPM Input. At the same time REX6 E2 was configured as UDI 12ch for the VBar. Also in this point I made sure REX6 output 1 was giving servo-signal on channel one for diagnostic purposes.

I hooked my oscilloscope to visually see what really happens to signals at what stage. I wanted to read the PPM from RSat900, UDI from REX6 and the normal servo-signal from REX6. In the scope-picture above we can determine a few things.

In the normal situation where 2.4GHz band is up and no backup is used the UDI-signal is stable and is recognized in VBar without issues. Same is of course for the servo-signal from REX6.

One thing did catch my eye, the PPM coming from RSat900 is all over the place. I had the timing in RSat900 as 20ms, 8 channel and direct. The PPM-pulses came with irregular intervals.

Jeti have given us a easy way to make sure everything works, we can kill 2.4GHz band from transmitter to verify our 900MHz connections. 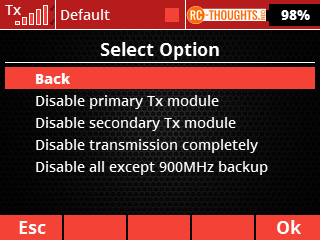 Choosing the last option in menu (Wireless Modes/Trainer -> F1) kills 2.4GHz, makes transmitter acknowledge with a warning and we are on backup 900MHz band:

After that let’s look at the scope to see what is going on: As we can see the most important thing to us, the UDI, is not only up but it is also very stable and clean. Also the servo-signal is up and the thing that I find interesting, PPM-signal coming from RSat900 is spot-on regular, synced and clean. Now, if this is not good news I don’t know what is.

Thanks for asking, VBar is doing absolutely perfect without 2.4GHz link in REX6. VBar reads the UDI fine, channels are moving, there’s no irregularities anywhere. Looking into VBar log-entries we are getting even more happier, no signal errors during the fail-over to 900MHz! I tried several times with different amount of “servo traffic” (shaking sticks like a madman) but nothing, no errors.

And last, a little surprise

If we think the above situation (no 2.4GHz link) a little, this is what happens:

Now, we could think “why not put UDI out from RSat900, then REX6 would not need to re-calculate it”. This is easy, does not work since REX6 cannot read UDI. Ok, let’s take the next one:

I’d like to use PPM to VBar instead of UDI?

This really would make sense, REX6 would not need to re-calculate the signal, just relay it out to VBar. But no, for some reason this does not work.

Setting REX6 to give PPM out to  VBar (or any other gyro) and activating backup 900MHz sets REX6 PPM output to zero. No signal no matter what. I first thought it had to be an failsafe-issue but no matter what happened I did not get any PPM out from REX6 in fail-over situation. Good news is that this is purely software, this might (and most likely will due popularity of PPM) change in future updates in receiver firmware.

The final conclusion is that the backup-idea of 900MHz link does give also the gyro-using model-flying person a safer way to use their expensive and often labor-intensive models even in some more difficult radio-weathers. And this is nothing but good!