Here’s another setup guide from a forum request, user had it working but not the way he was using it in OpenTX:

“For my DLGs currently I have 5 flight modes. Using a spring loaded three position switch, I pull the switch to activate launch mode, release it to let it spring to middle position for zoom mode. After the zoom on a launch, I flip that switch to the 3rd position to disable zoom mode and allow another 3 position switch to activate Speed, Thermal and Cruise modes. Launch and Zoom are higher on the priority list so when I pull the switch again it overrides the normal flight modes until I manually push the switch to the 3rd position.

I do this because flaps need to be disabled for Launch and Zoom modes for quick turnaround tasks.

OpenTX accomplishes the same thing with a 2 position switch. Spring loaded held for launch mode, release for zoom mode, then moving the elevator stick past a certain point deactivates zoom mode and allows another switch to change the normal flight modes”

This had me baffled for at least two mugs of coffee, but during third mug I got it, so here it is.

How to set things up 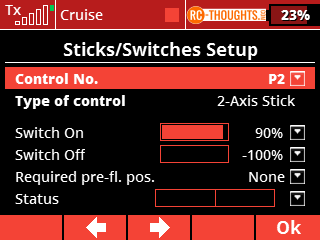 Next let’s do the flight modes. Note the order of flight modes, Zoom has to be above normal flight modes and Launch needs to be above Zoom. Set the activation switches as in picture below. No need to care about the fact that Logical Switch L3 is not done yet. 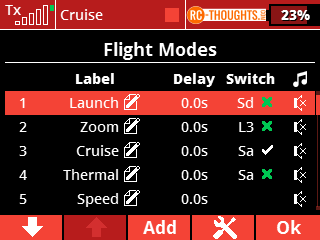 First flight mode Logical Switch, control 1 is “Momentary launch switch in OFF-position” and control 2 is “Elevator stick in the middle”. This means in practice “both controls needs to be active in normal flying mode and level flight”, set condition as “AND”. 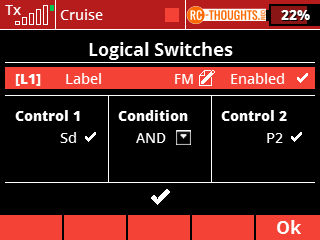 Second Logical Switch is a simple “L1 AND L3”, don’t worry about L3 not been done yet. 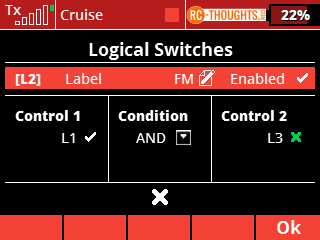 Third Logical Switch is “Momentary Launch-switch in ON-position AND L2”. In the picture below momentary launch-switch is off. 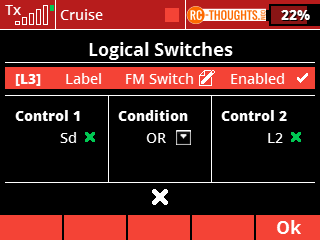 Here’s an explanation on how the setup works, keep an eye on the upper screen for flight mode information.

We have started the model, L1 is active since elevator stick is not in “disable zoom”-position and launch-switch is not in launch-position. This means we are in the flight mode the 3-position flight mode switch defines, in this case in cruise mode. 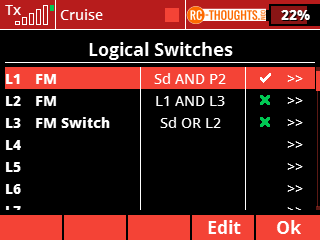 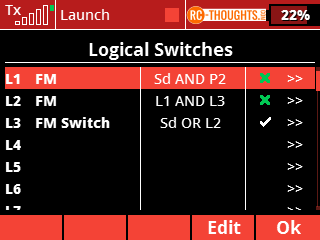 After releasing the momentary launch switch we are no longer in launch mode, but since we have not moved elevator stick yet L3 is still active. And since L3 controls Zoom mode which is higher than the normal flight modes we are in Zoom mode, seen on the upper part of screen. 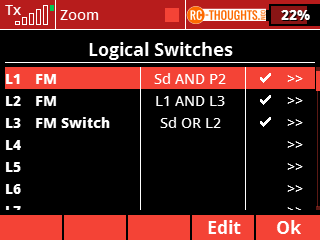 Finally, after moving elevator stick beyond the activation point we are disabling L3 and therefor return to flight mode controlled by the 3-position switch assigned in Flight Mode menu, in this case Cruise: 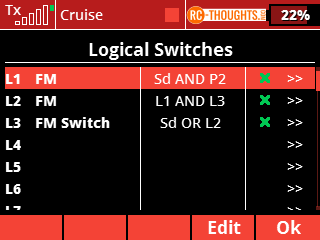 After this chain of events activating the switch made by elevator has no other impact than activating and deactivating L1. And since momentary launch switch is not in launch position this has no impact, we are either in Cruise, Thermal or Speed modes depending on the position of the flight mode switch.

Here’s the function in practice demonstrating flight modes and reaction speed, keep your eye on the flight mode display on top fo screen:

There you have it, fizzy and momentary to latching functions for DLG!