As I’m flying only helicopters at the moment I have no need for receivers with great amount of output channels. I have one heli with conventional outputs (every channel to gyro from own receiver output) and one with UDI to VBar gyro.

I started with RSat2 in VBar-model but jumped over to R6 since I needed (well, wanted) to control my Ultra Guard from receiver. (Story here.)  R6 is not the biggest receiver in the market but it certainly is not small. So also in this aspect the new REX6 is a welcomed addition to Jeti line-up. 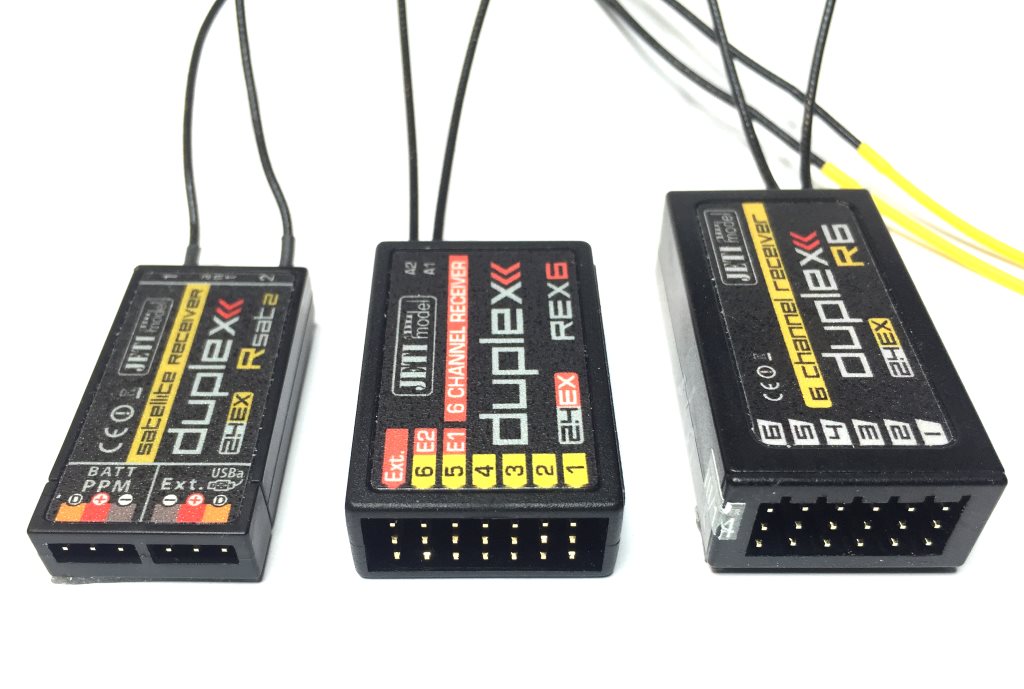 One thing that really makes a difference is that REX6 is 7 mm shorter but that is not all, there is no output/input in the rear of REX6 as there is on R6:

This is in some installations a really great improvement. For example in my Logo 800 heli the telemetry input from sensors goes straight down which is not really optimal:

So. What’s inside the new. smaller package?

In short, nothing much and a lot. There’s still the 6 channel outputs for servos and a EXT-port for telemetry. But there’s new red markings on channels 5 and 6, channel 5 is marked E1 and channel 6 is marked E2, this is where the new “magic” happens.

E1/E2 are more versatile outputs that can be configured to match a great variety of functions and needs: 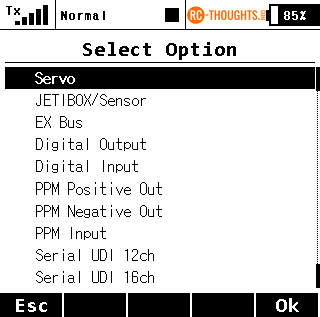 Compared to normal output that has options “Servo”, “Digital Output” and “Digital Input” the E1 and E2 ports have somewhat overwhelming array of options to choose from. First, the “JETIBOX/Sensor” is for telemetry. That means if You choose both E1 and E2 to this option You can attach two telemetry devices straight to receiver, no need for telemetry expanders anymore.

The option “EX Bus” is for example in connection to central box or for example Spirit flybarless gyro. EX bus transfers channel throw and telemetry information in one output.

Digital input/outputs are what name says, so is PPM Positive or Negative. PPM Input is aimed for another receiver’s PPM Output and for redundancy-functions.

The EXT port in receiver is just like in R6 a EXT-port for JetiBox or telemetry, it cannot be changed to anything else. EXT is also the bind-port as usual.

Something I noticed while testing

According manual from product page REX6 is accepting input voltage of 3.5 – 8.4 volts. I did my testing with a 2S LiPo on 8.05 volts. I noticed REX6 get’s warm. There’s a spot on top that got to  42-45°C and that got me somewhat worried. I compared this to RSat2 and R6 and found out they are at most on 30-32°C when powered on the same amount of time. Ambient was sun- and draft free 23°C. Electronics does really not care about that temperature yet but still, worth mentioning.

I did a comparative range test between R6 and REX6 and could not get any difference to talk about. Really good. Both tested R6 and REX6 are with 100mm antennas that were placed in 90° angle on testing. Both unit’s had same power-supply and were located on exactly same spot and direction.

Well. Nothing. And something. There’s been forum-rumors on 32-bit processors in REX-receivers and some logging capabilities. I just can’t find anything regarding these in official information or on product documentation. Or I just have missed them, if so please let me know. According information found on german JetiForum by Jeti logging of telemetry data and “control fluctuation” will be available with some new program later.

Yes and no. You need new REX-binary files to your DC/DS transmitter. If You can’t find them from Jeti Model’s pages download them from here, unzip and copy bin-files to transmitters Devices-folder. I’m sure these will be included in next transmitter update. Also Espritmodel has all the needed files on their FW 3.02 update for transmitter, download from here.

As a summary this is a great addition. Also the REX-models with gyros (assist) are coming during this year, those might be fun to play with. Maybe I should get a plank also…

I always like when manufacturer put’s more (usable) functions to smaller package without loosing something. This is exactly what happened here. I’m pretty sure I will change one of my R6’s to REX6 purely because of versatility and output placement. Great work, Jeti!