Since I also speak swedish I’ve been a vivid Helisweden.se forum-reader ever since I started with helis just a few years back. They seemed to have a good reputation on the Habo helimeet, it’s somewhat “THE” meet to visit. So I thought what a heck, let’s book it in and let’s visit some swedish heli-fanatics :)

I did not regret that decision!

It’s not that far, car got 540km in one way, the issue is that there’s some water in between so I need to take a boat-trip. I chose to take the boat at night, excellent to get some good sleep too. Advantages are also some tax free stuff one can buy on-board…

Habo is located in southern Sweden, just in the south-end of Sweden’s largest lake, vättern:

One thing I really need to say, the drive from Stockholm to Jönköping and Habo is one of the most beautiful road-trips scandinavia has to offer. I like the wide, open fields, the two-lane highway and the overall scenery. Really nice drive!

As some of you know I’m without a radio. I ordered the DC-24 some time ago and had to sell my DS-16 to finance the deal. Unfortunately DC-24 is delayed so I’m without a radio. Since I’ve been in contact to Jeti and Mr. Mitura almost on weekly basis I asked if there’s anything he could do to help me. And yes, there was! Mr. Mitura and Jeti sent me a really nice yellow DS-16 Carbon Edition to Sweden! Now, if that is not service I do not know what is! 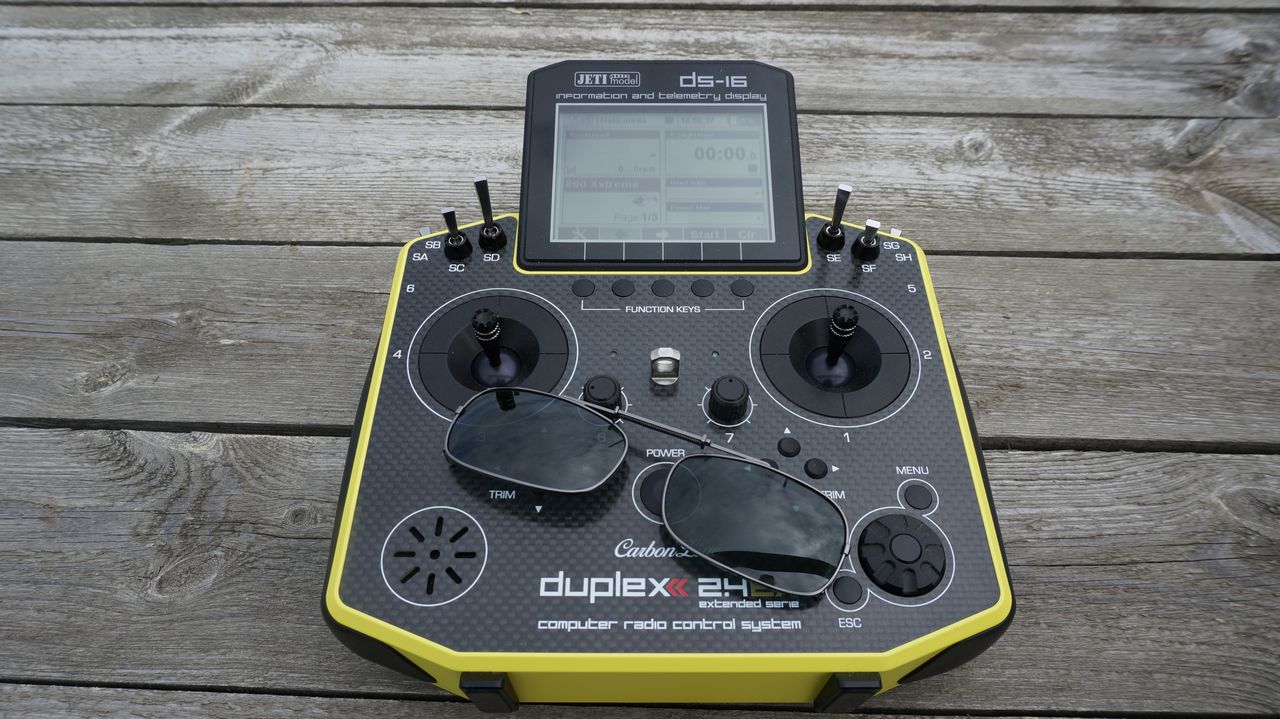 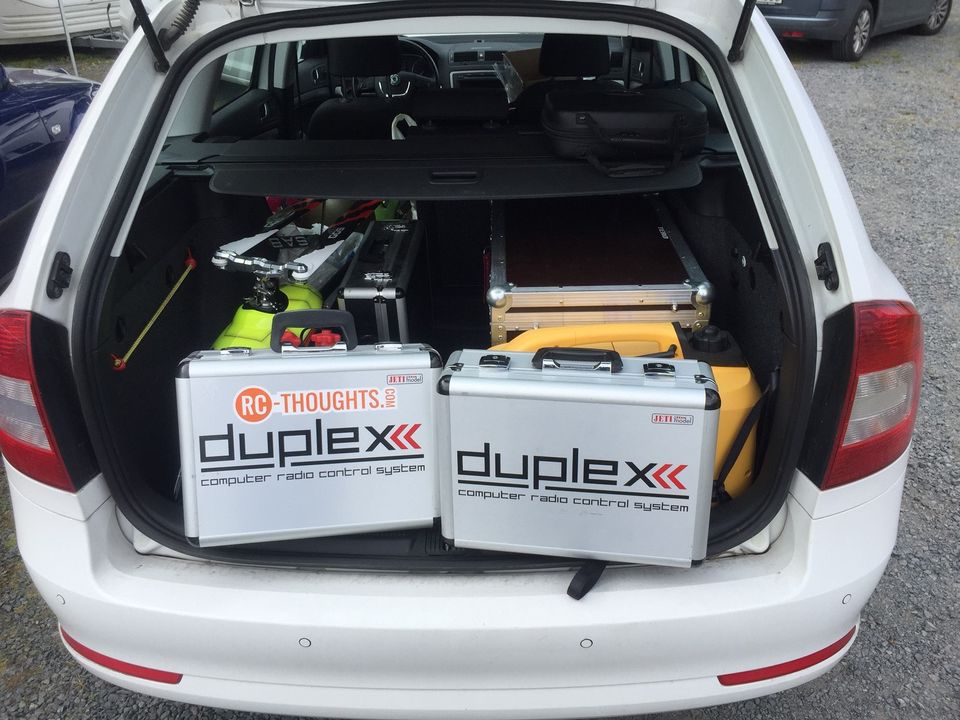 I tried to make sure everyone knew I was flying Jeti and how much I like the radio :)

Always fun! Start on thursday, drive the 170km to Turku from Tampere and get on-board for some R&R .:) 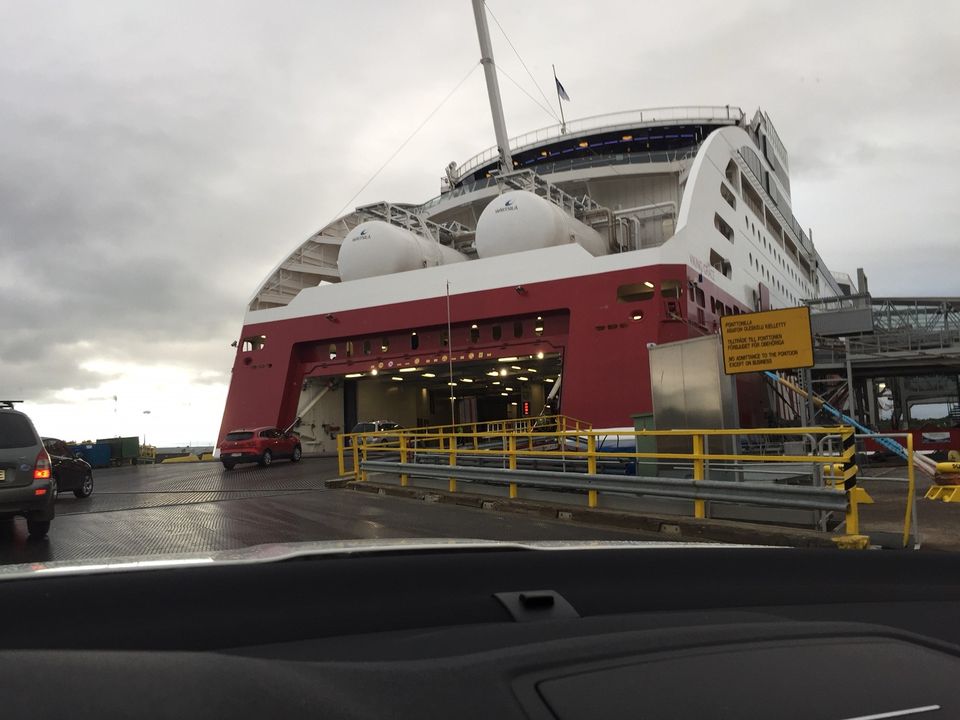 Time to relax a bit while waiting for the cabin to get ready :) 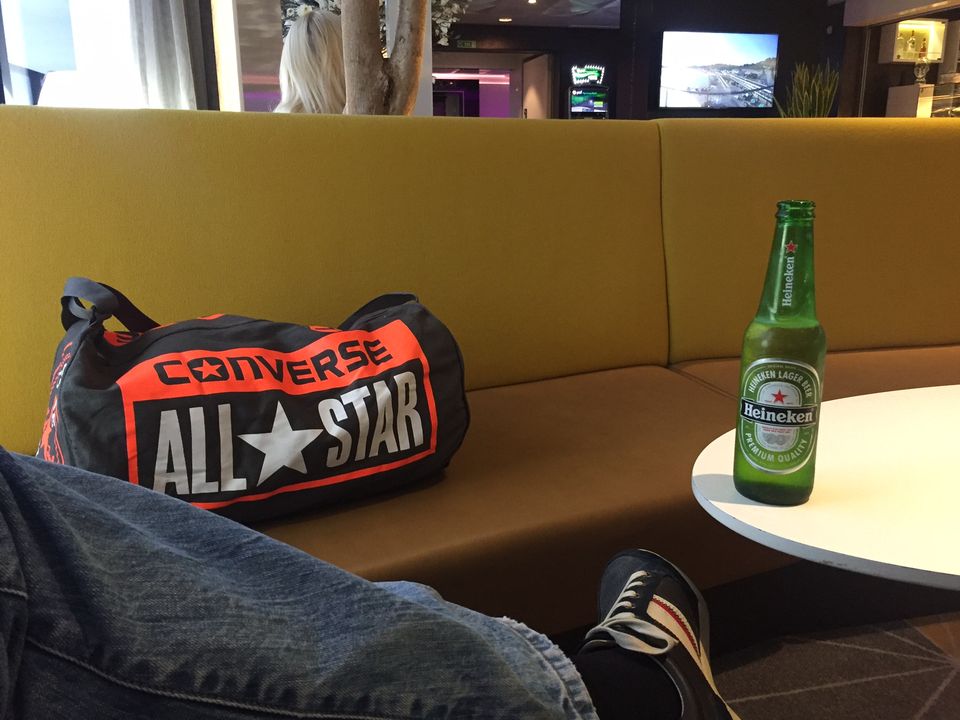 Some people do travel with a bit more purpose-built equipment, this is Mikado’s view on transport: 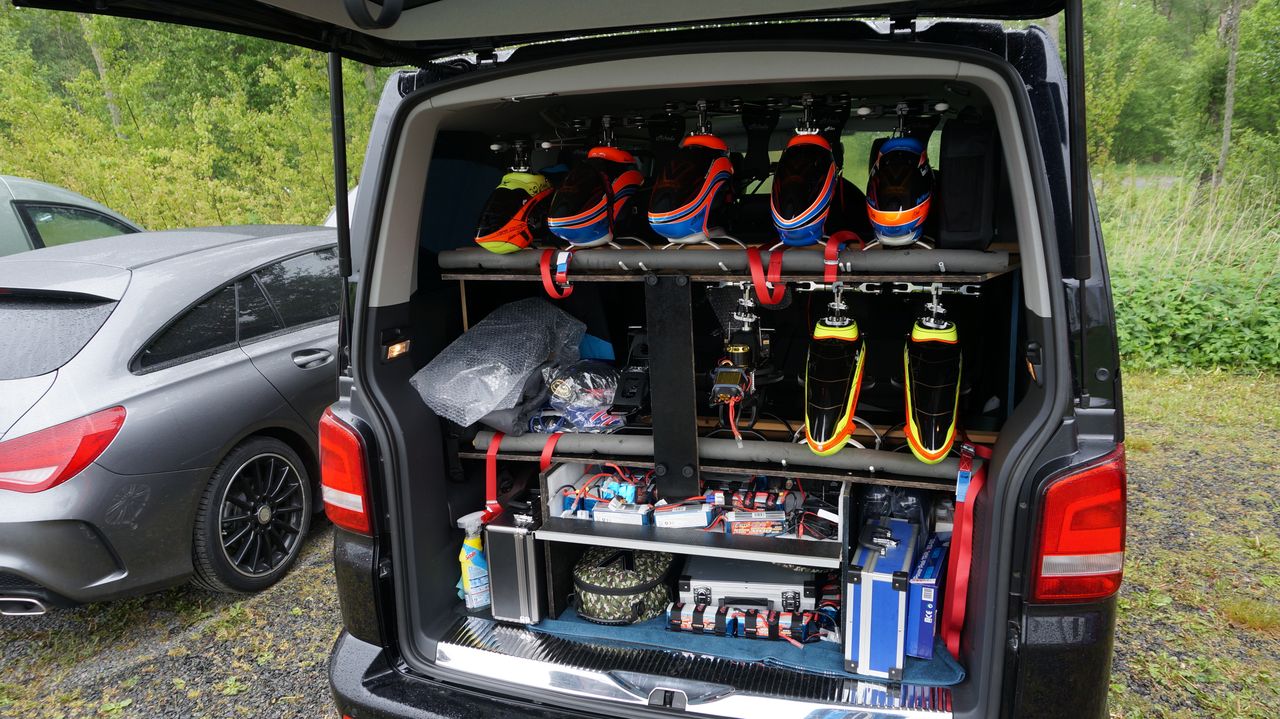 The next day, some 370 km later I was in Habo. Trip was great, no worries. Picked up the radio on the way to Helimeet and shake’d some hands, really cool to meet all the nick’s from the forum.

Some people need’s to be presented!

First of, to the right Fredrik_R with EKAN to the left (I’m pretty sure I got EKAN wrong, let’s see..), Fredrik is one of the main organizers of Habo Helimeet: 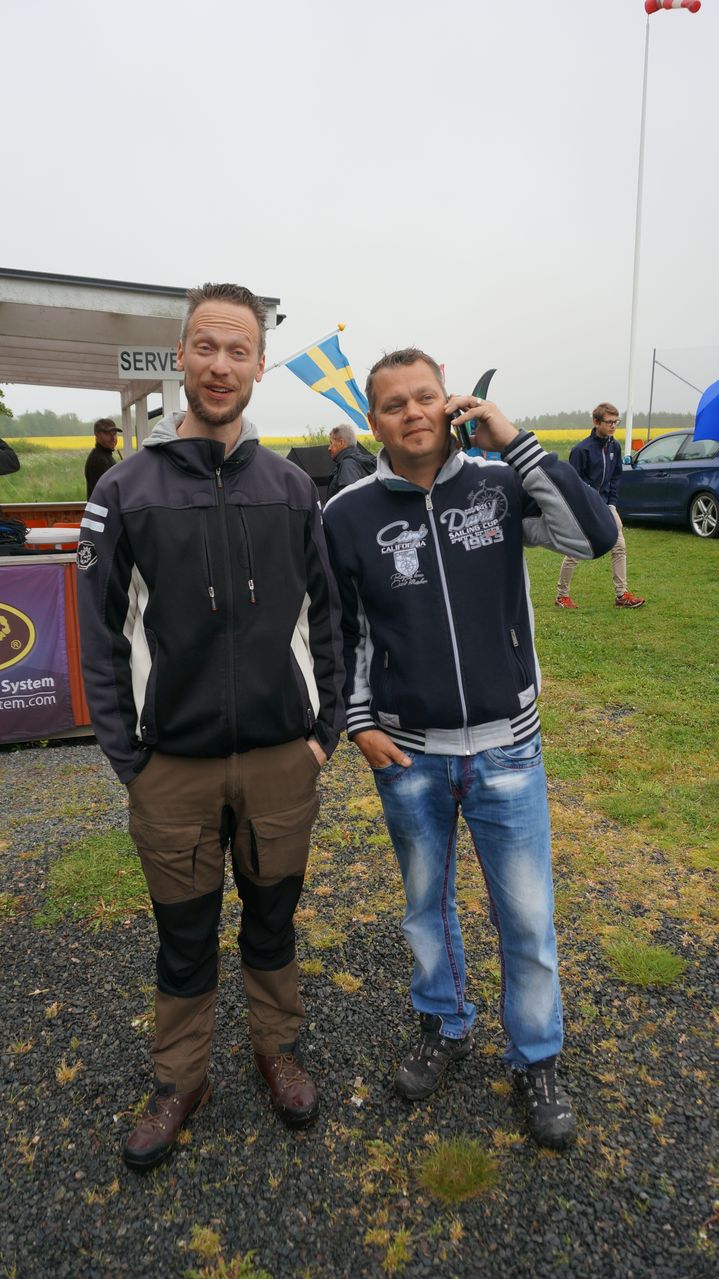 A special mention should be made to “Hustomten” (freely translated “house-goblin”) who is a truly hard-working and always happy dude making sure everything works at Habo field, he was literally all over the place :)

Another who truly deserves a picture is Fritte, one of the craziest swede’s I’ve met! Here he’s with a 35 Mhz radio, and he did use it. (More on Fritte later…) 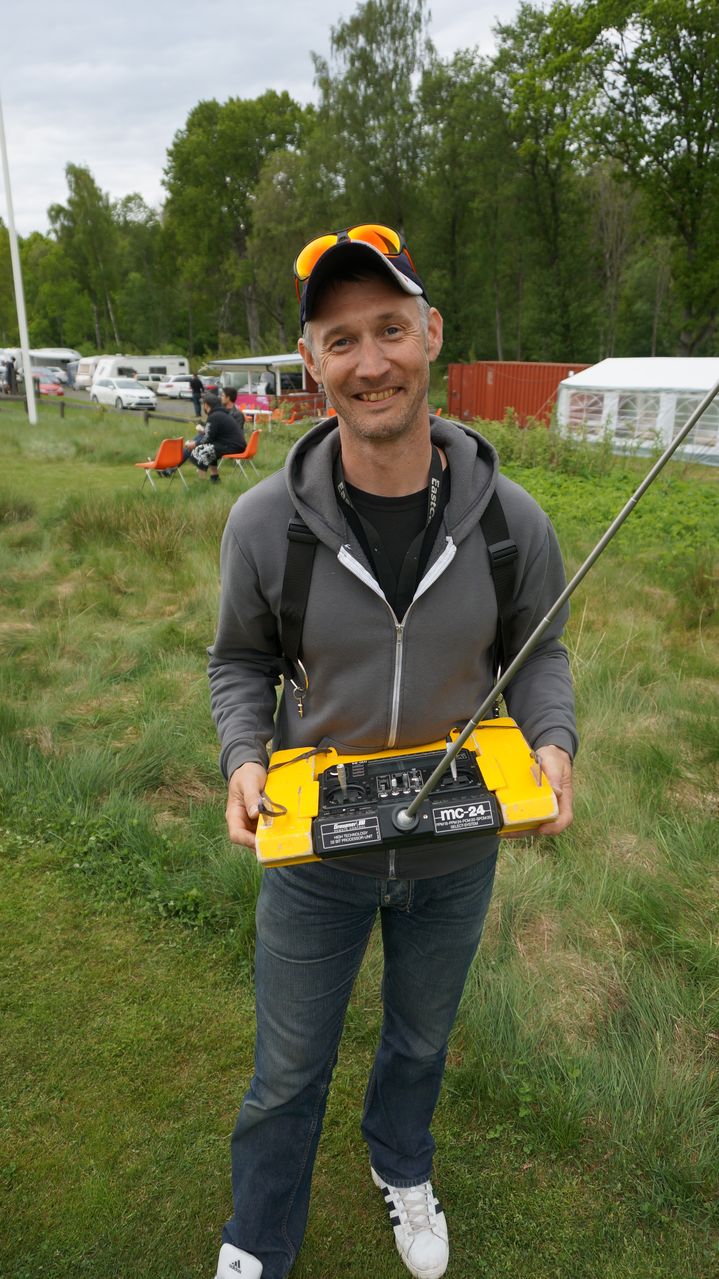 Yeah, there was some :) How about Mikado factory-team with for example Alex and Marik Wiehenstroth? 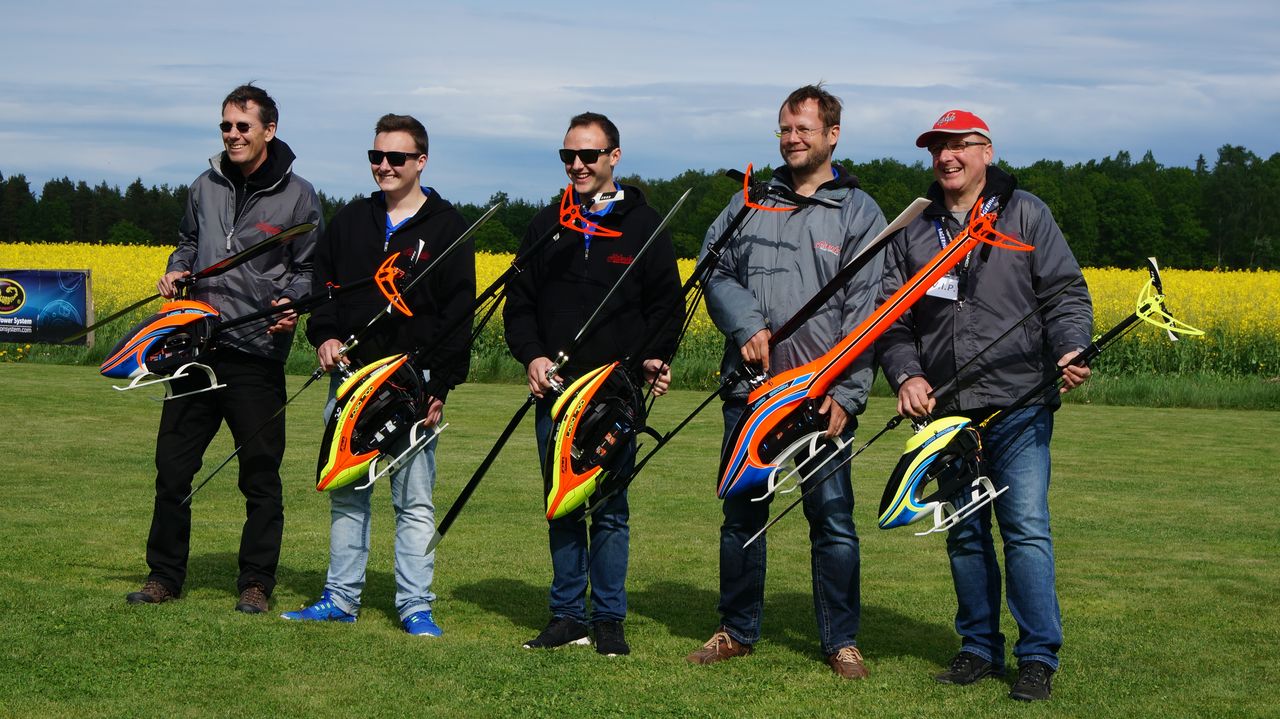 And yes, Dunkan Bossion & Valerio Bottero? And of course Dave Dijkmans and Carlos Rossi from Area51-RC! 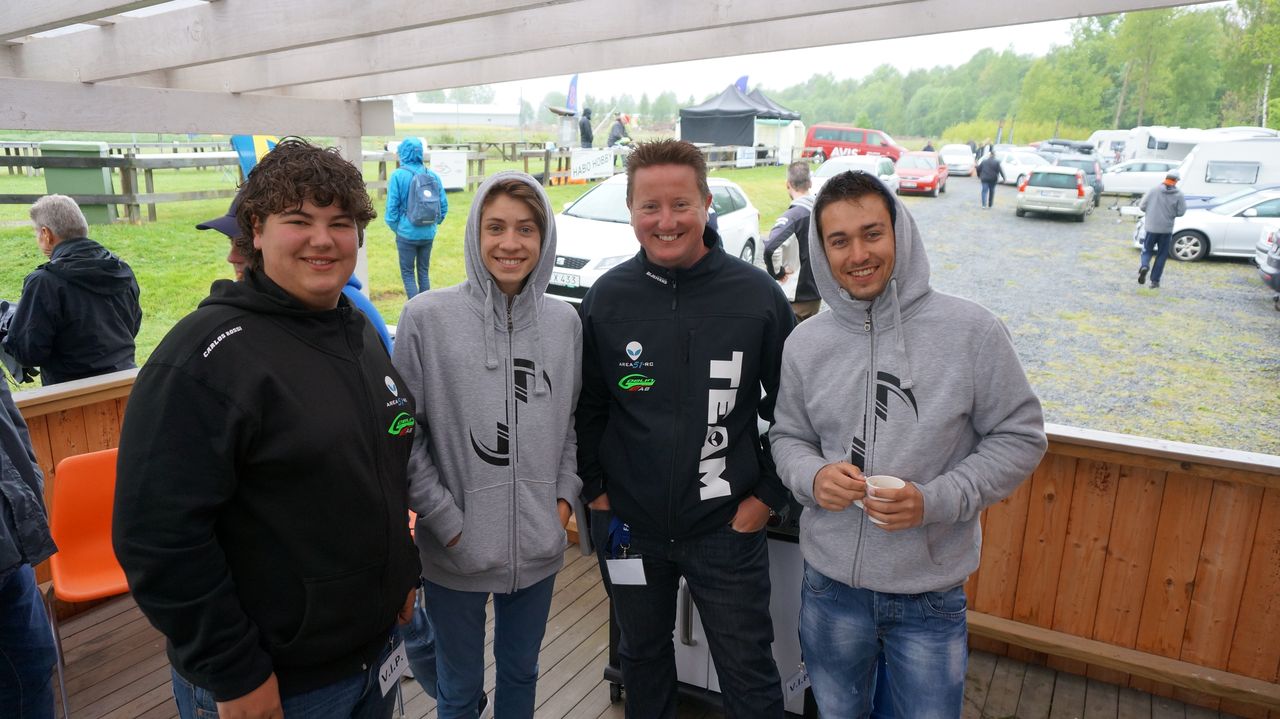 This gang of four was without a doubt one of the happiest and most laughing gang of the weekend. Proof on that later on…

Well, almost. Then there was Team Skåne. I have no idea how explain “Skåne” to all readers in for example USA or Canada. Well, Skåne is a area in Sweden, they do not speak swedish, at least it does not sound like swedish. They have their own language…

Jokes aside, this gang of guys was fun to listen to, didn’t actually understand a lot they talked about but I did get a picture on them and promised to post the guys on internet so here comes Team Skåne! 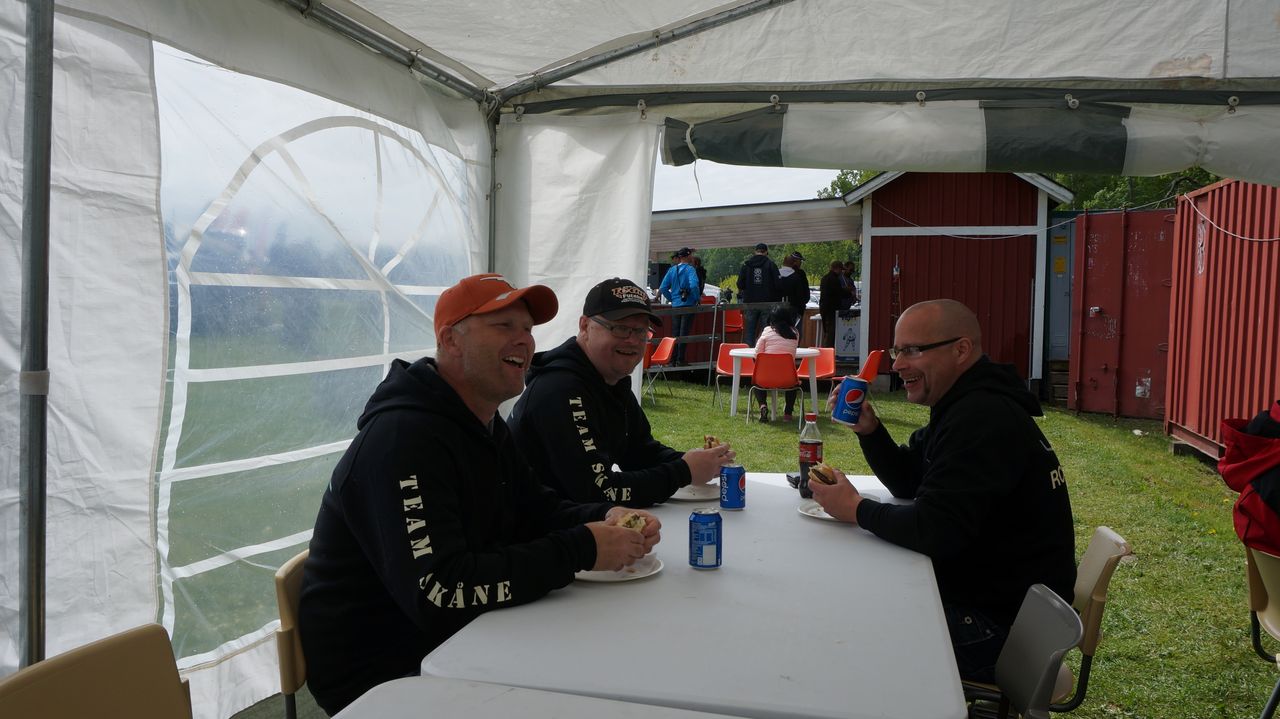 As usual these meetings are also a lot of tech-interested guys wet dreams. Like now, Mikado was there with Logo 700 Xxtreme with plastic frame: 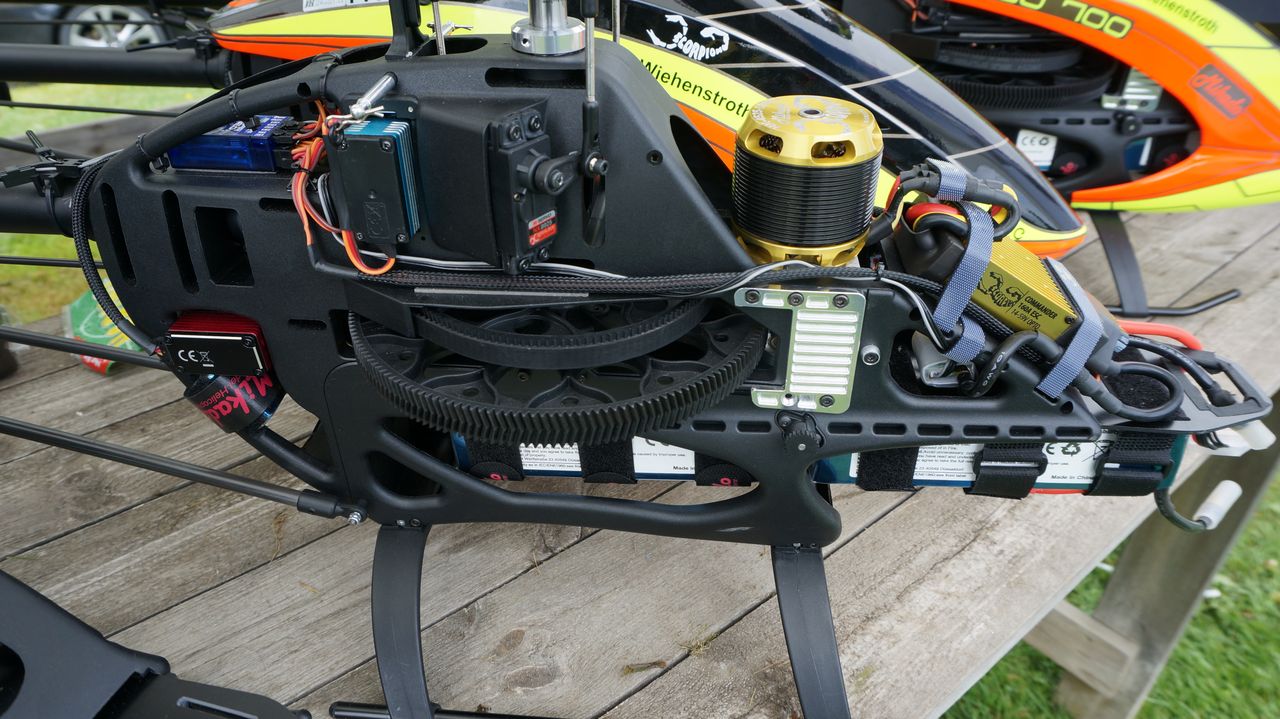 This frame was actually interesting. I’ve not been too keen on plastic but there’s some nice things and ideas here. As some of you know the rear-drive is done with help of a vertical axle that holds gears to torque-tube and pulley for belt to main-axle. In old 700 and 800 Xxtreme the maintenance and removal of this axle is not that nice, pretty much hard work involved. Mikado actually thought of that, it’s now easy to remove, just un-screw some screws on the side and pull the axle right up through a hole in frame. 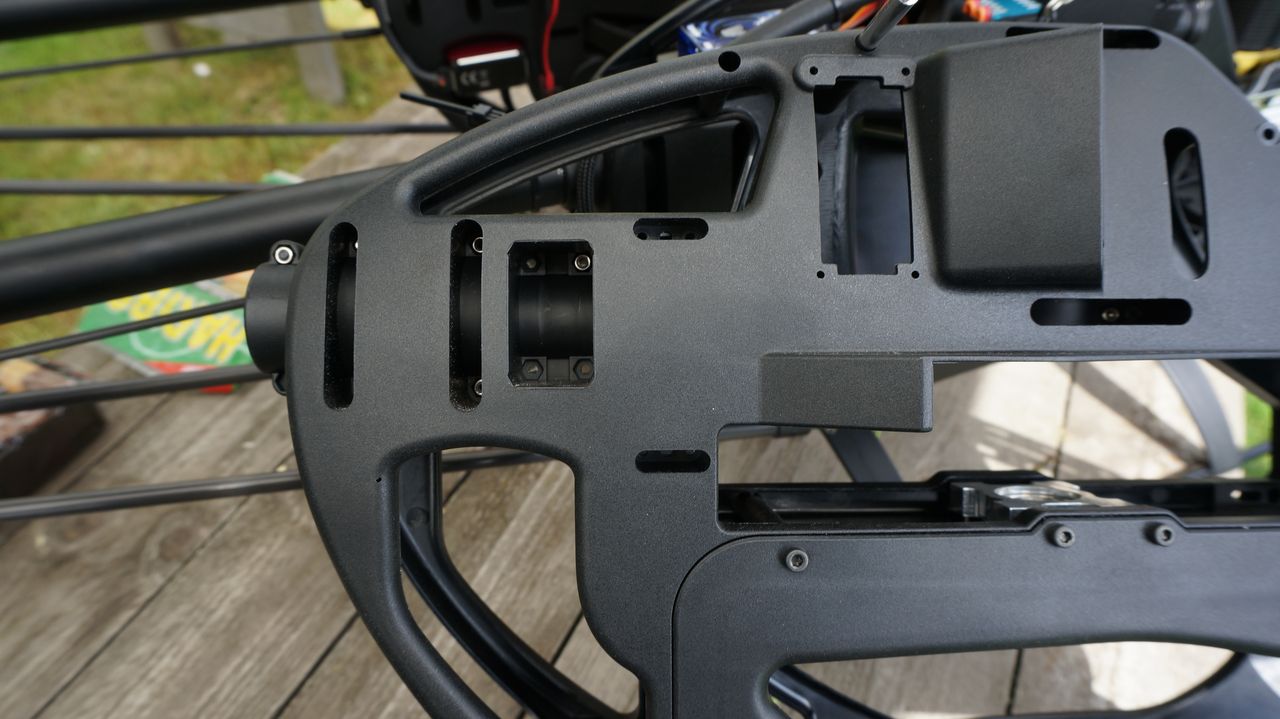 Also, this same frame is used for the new 800 Xxtreme, removing the extra part holding tail-tube allows a bigger tail-tube to be fitted to same frame. I forgot to ask but I’m guessing the lower frame-part will be different in 800 due better room for 14S (maybe 16S…) batteries. We’ll see.

Soxos 700 was also interesting. Haven’t seen one yet, if there is one in Finland I have not seen it so now I got a change. I do have to say the drive-train is interesting: 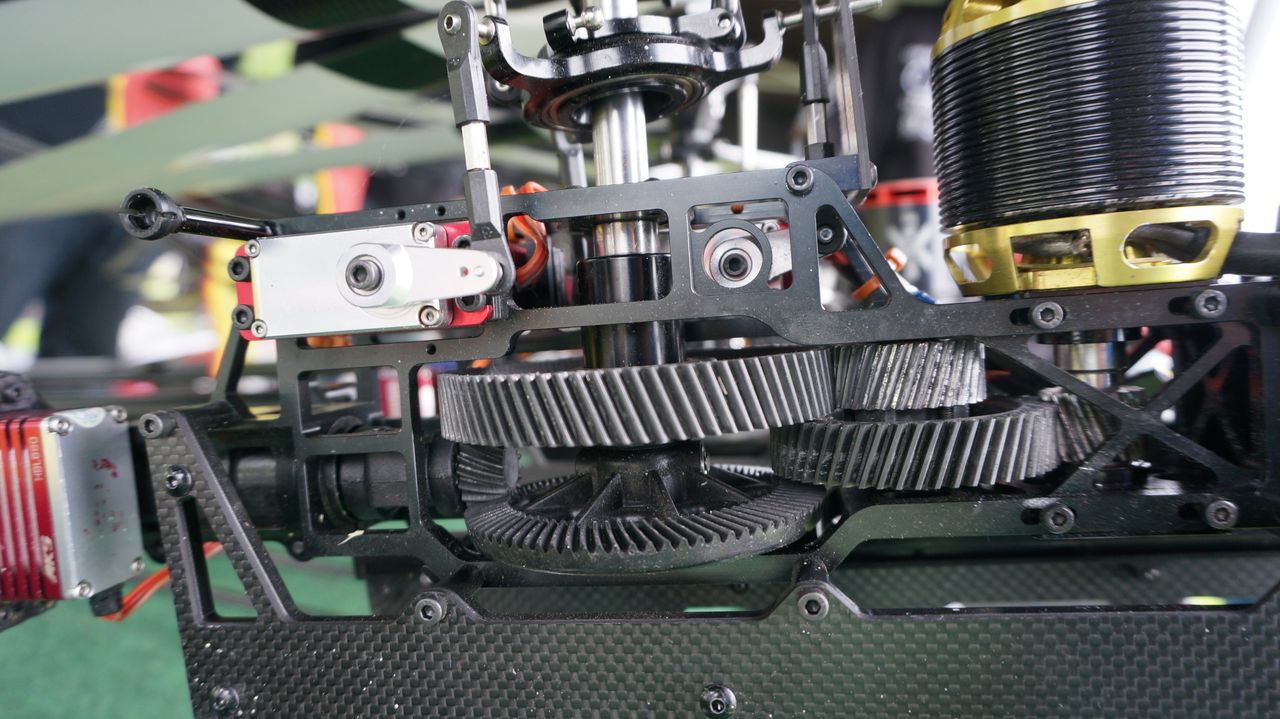 Also the way Soxos decided to do the tail-servo is a bit different from the mainstream: 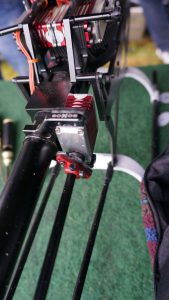 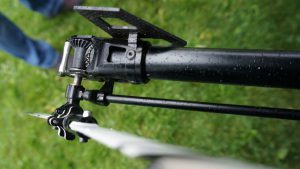 No matter how a heli is built, they do fly. They do also crash… Here’s Dunkan doing some service after a ground-contact… 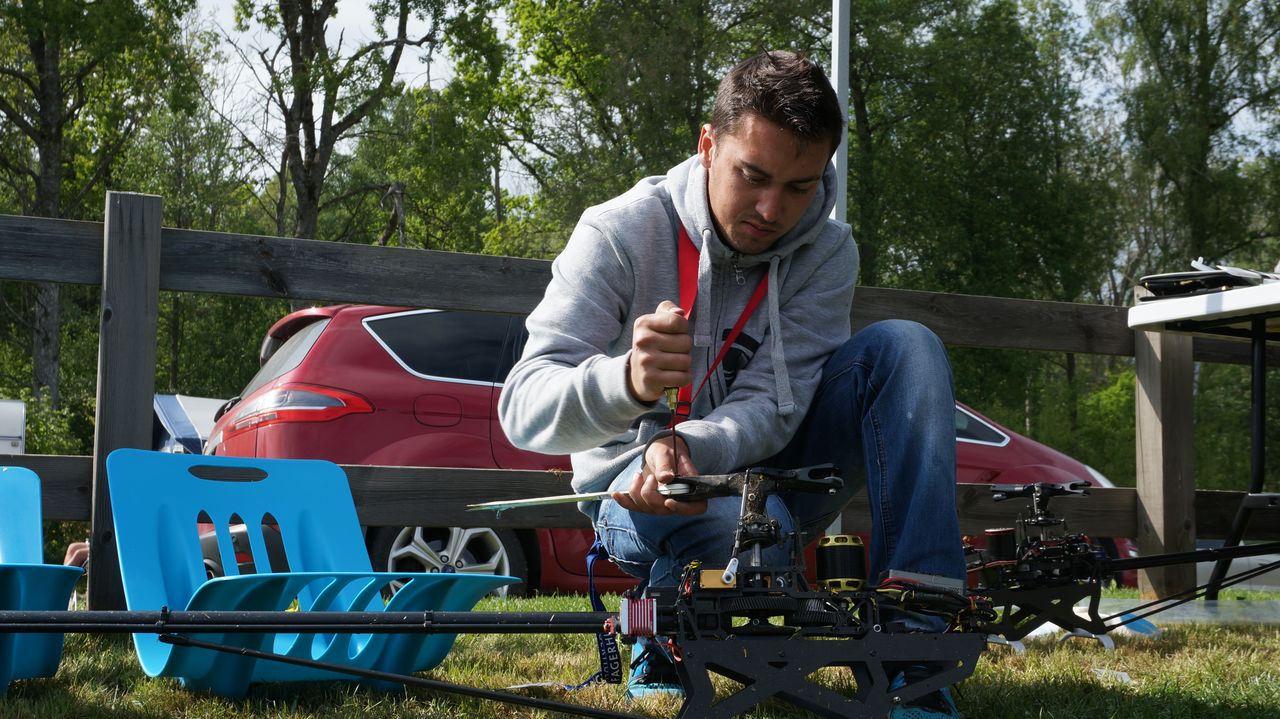 And while we are on the subject “tech” we just have to mention Linus Larsson (Sleipnir-developer) and his Gaui R5: 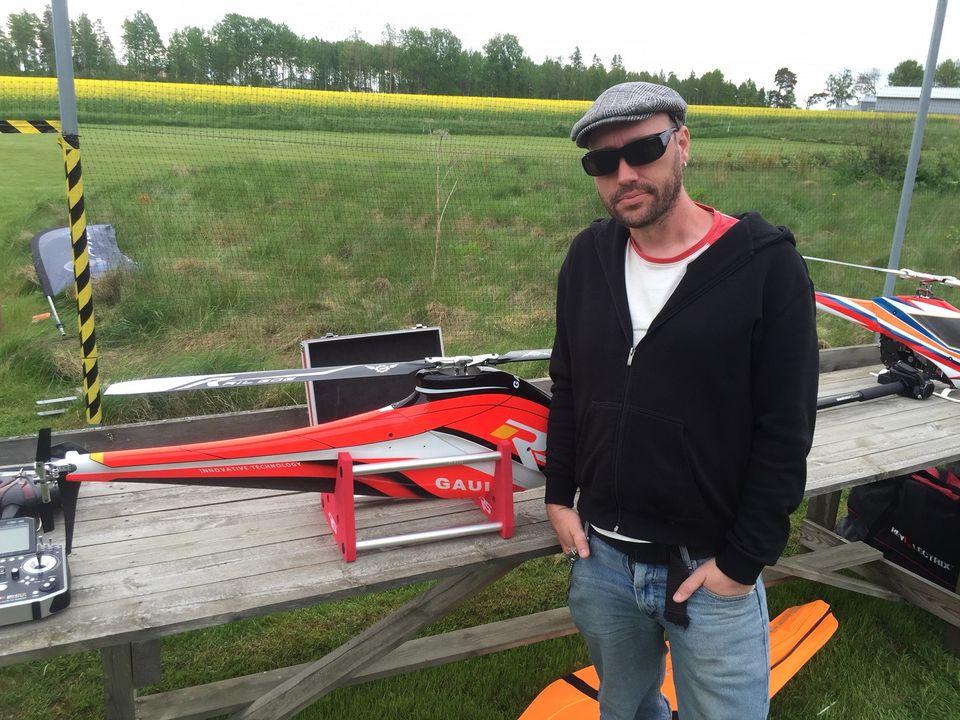 I was very impressed with this little rascal. It is SLEEK! 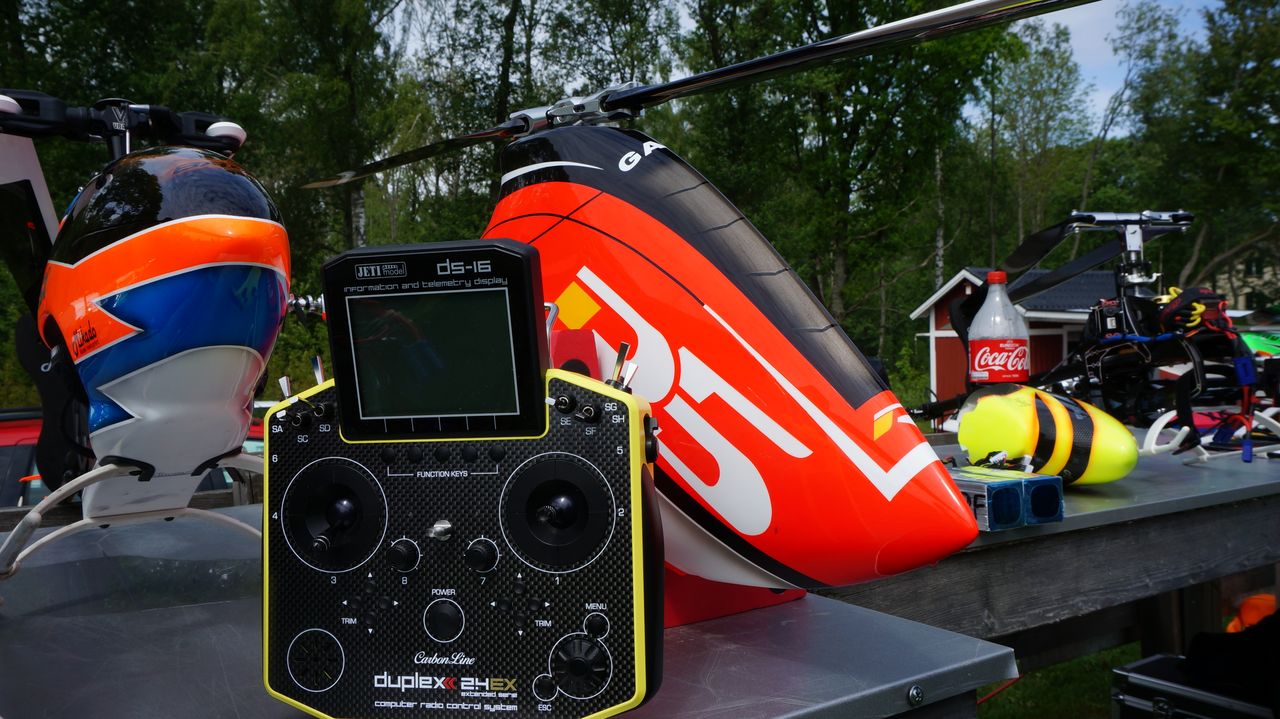 The powertrain is impressive: 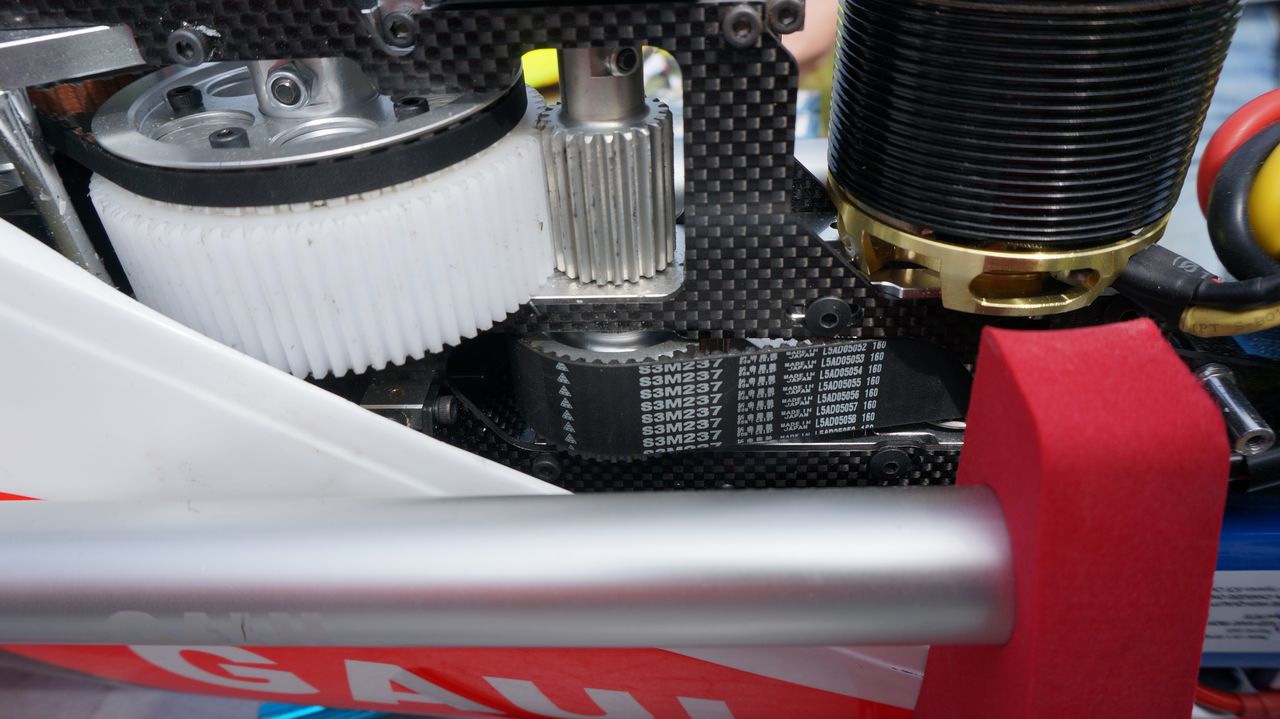 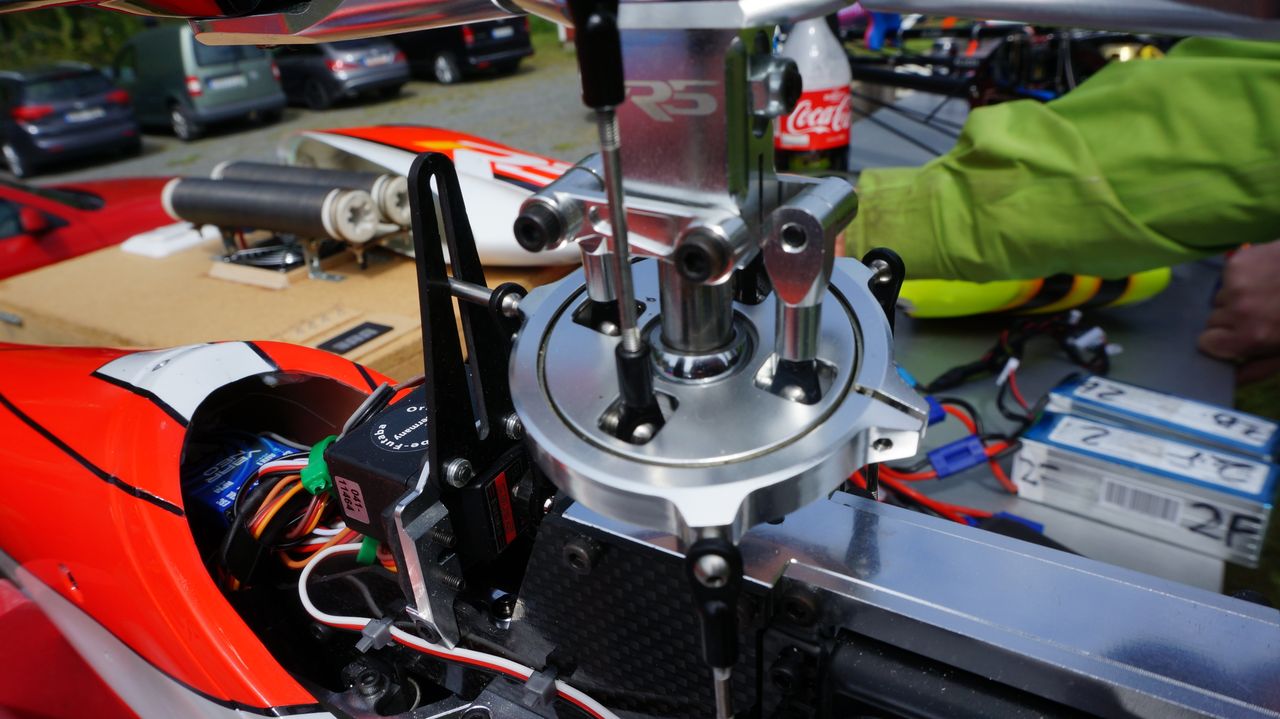 As we know R5 has a fun-looking landing-gear, it’s just a pin that is turned hidden for flight. Quite fun to watch in real life, all for minimizing the drag. Linus did some speed-runs and watching it did not really lower my speed-interest…

Yes! We did! I had my G380 on steroids and 800 Xxtreme with me, idea was to have som fun with the G380. Well.. I did, for a while… Apparently a resonance in main-blades due too much gain for head in 4200rpm is not that controllable :)

Here’s Dave with me, Dave is still laughing :) (Picture by Jonas Lindh, published with permission) 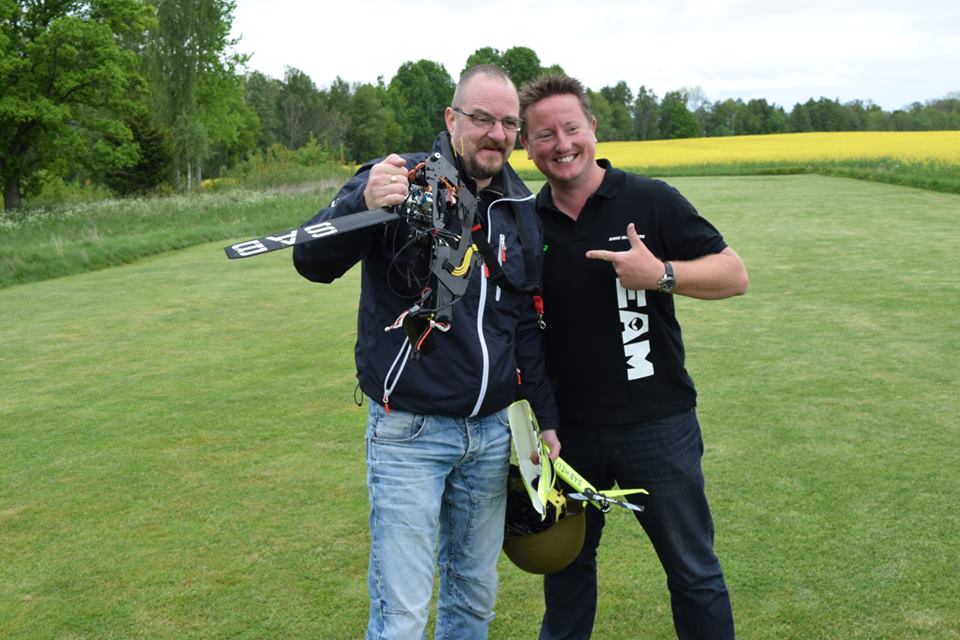 It’s almost more parts now than in a kit… 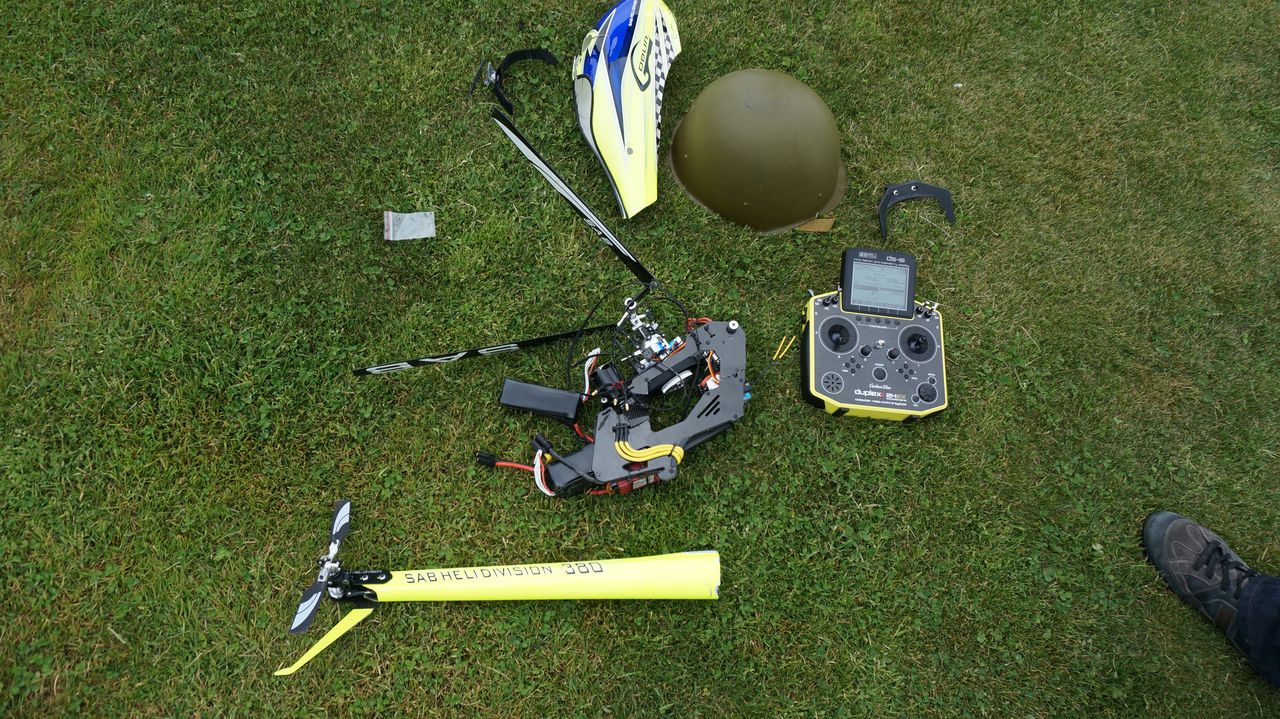 Dave got a really great video of the crash, hopefully I can find it, pretty much full speed straight to ground, quite spectacular actually :)

So rest of the weekend I flew some modest flying with 800 Xtreme. Haven’t flown it since autumn so I was a bit shy and careful. Well, can’t do any 3D anyway… So I put some smoke-cartridges on it and threw some colored smoke to the sky instead :) 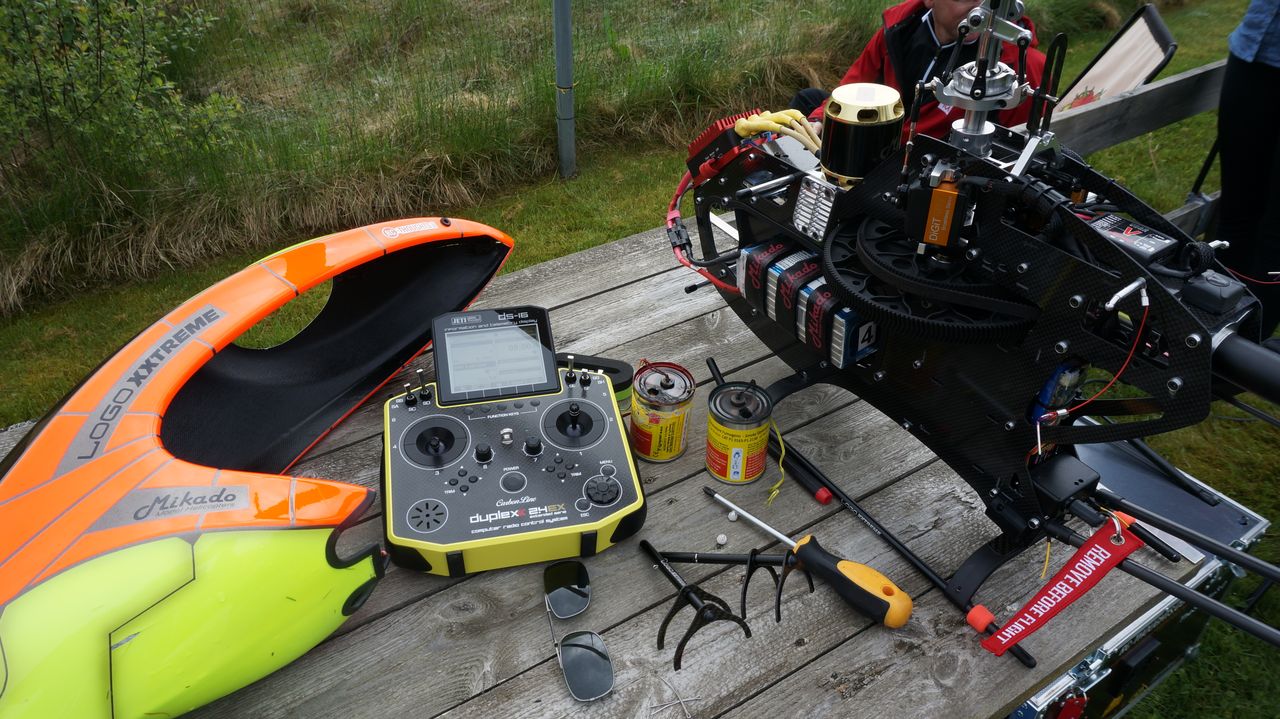 Ok. Let’s get to business!

This is what you want, I just know it!

Let’s start of with one of the Logos, I really like the flying-style of Alex and Marik:

As we know, the brother is also flying for Mikado, and it’s looking good:

Both Alex and Marik flew quite a lot, here’s Marik again:

It was actually fun to watch how flying-styles are different, here’s Dunkan getting warm in the fingers!

Like I told you, Dave & Carlos were pretty much laughing the whole weekend. But they did some flying too, they had their Goblin Black Nitros in pretty good shape and did some comboo-flights that were absolutely great entertaintment!

And Fritte. Yes. I promised more of Fritte. This dude is crazy, I feel sorry for his Gaui NX7, it truly is a workhorse :)

This flight did have some result’s too… 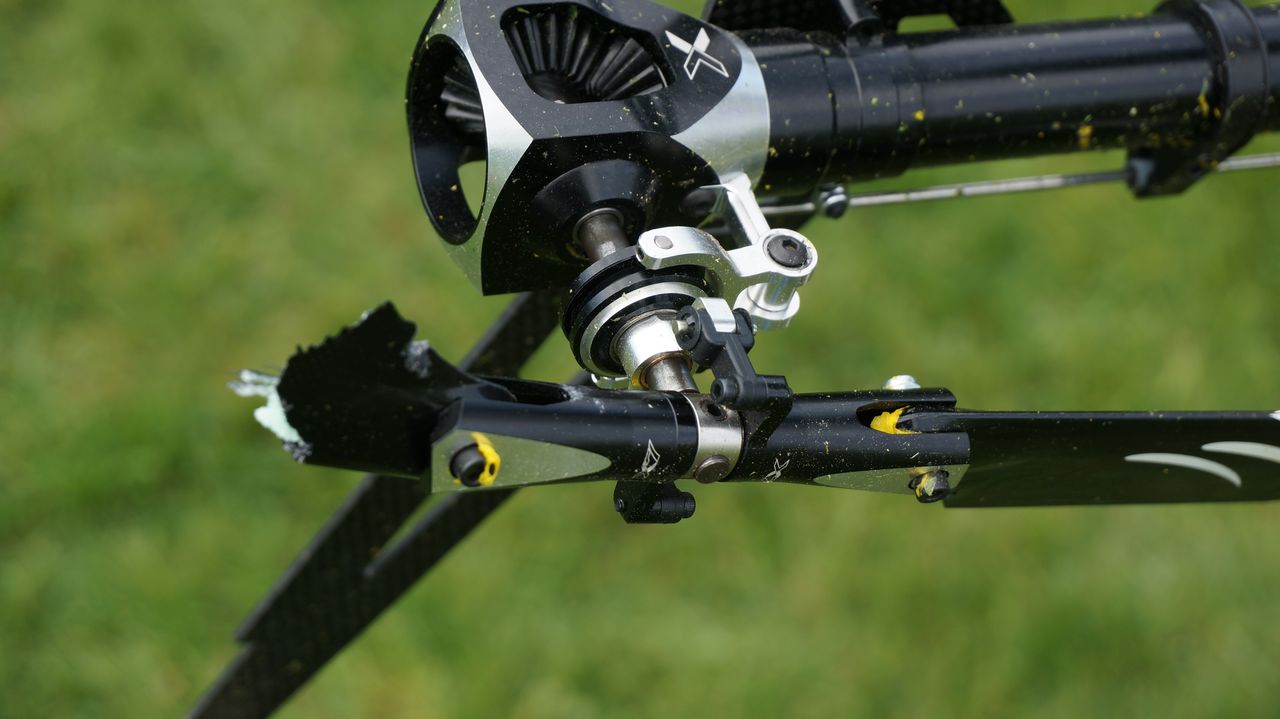 But the man himself was just smiling :)

Oh, did I mention Vaerio and Dunkan also did a spectacular combo?

Last but not least something different I liked quite a lot. A Logo with low rpm and truly nice old-school flying. It’s unbelievable how silent that heli was…

That everything ends sometime. Weekend was over and all that was left was to get in the car and look for the harbor in Stockholm. There were some stop’s on the way… 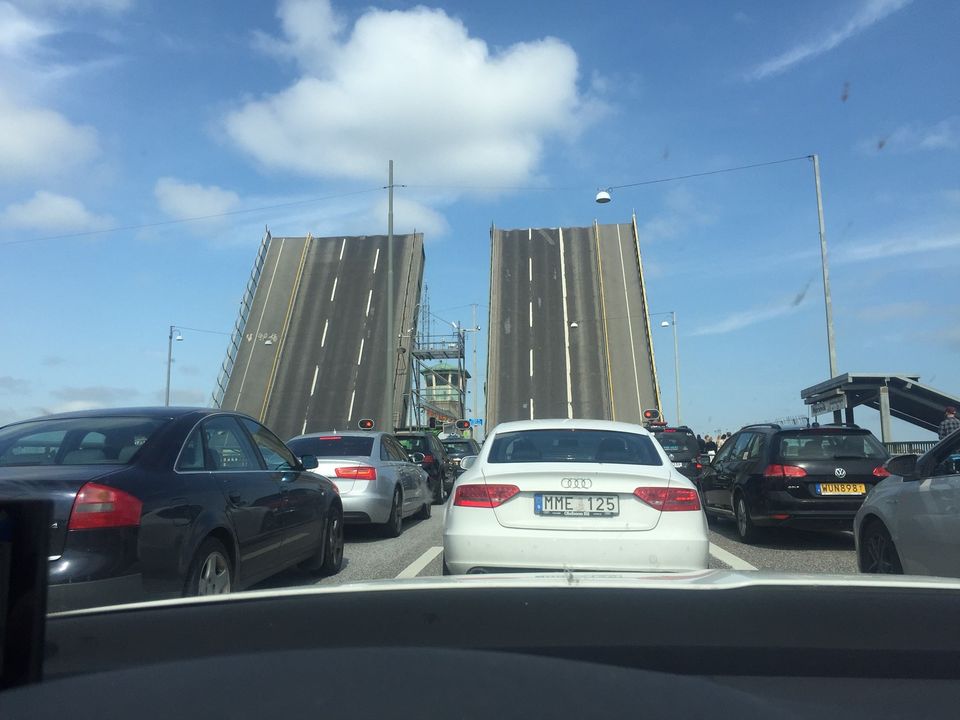 I did manage to find the harbor, all that was left was some waiting :) 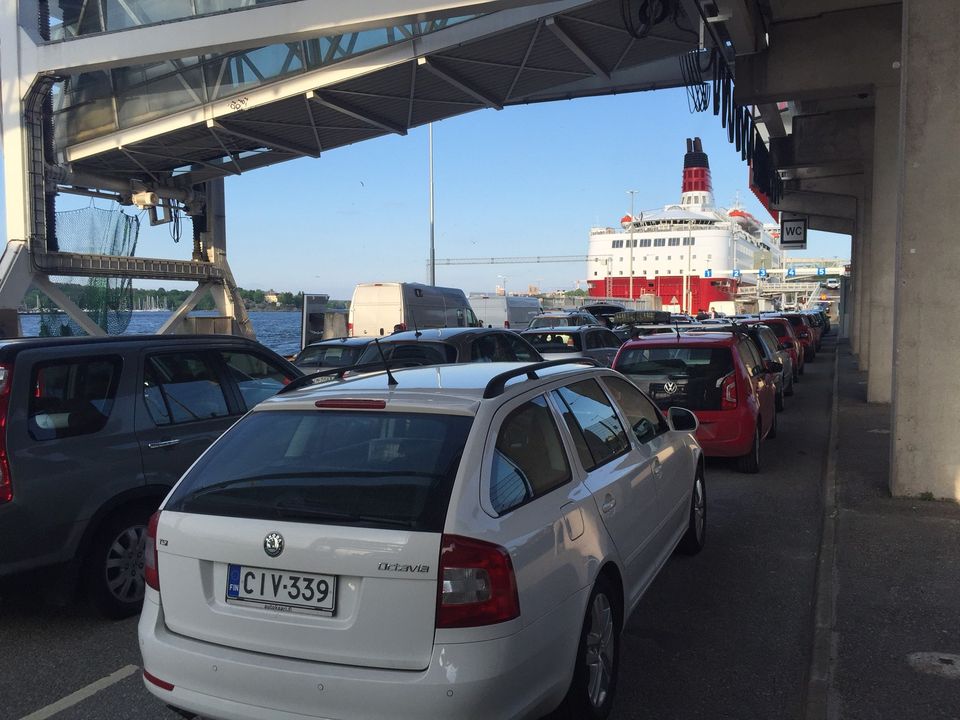 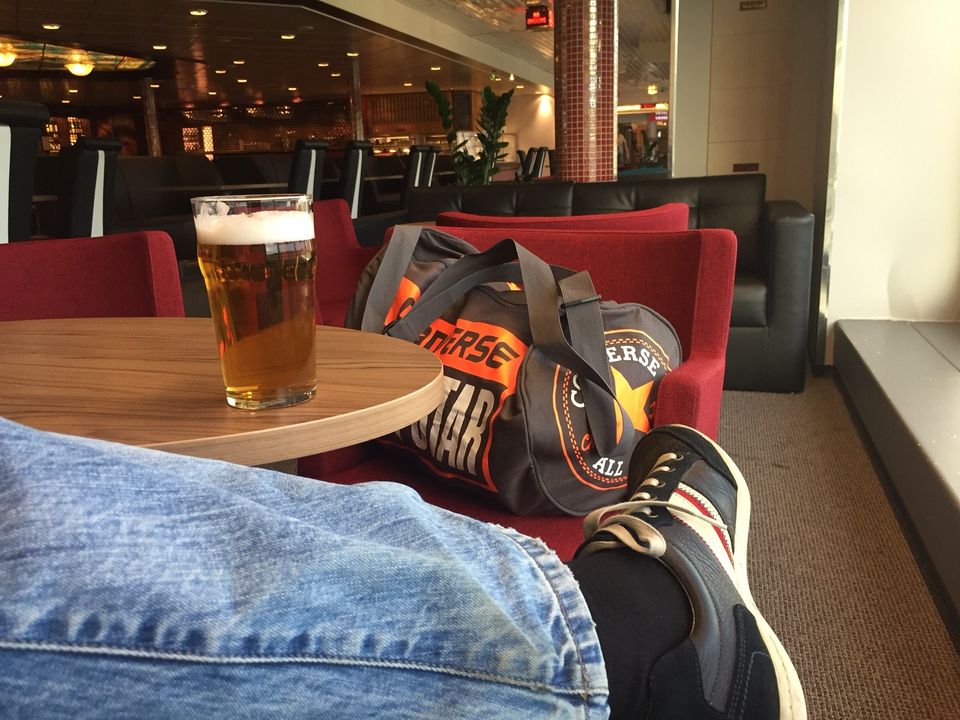 Oh, one more thing. I will be back to Habo! Count on it! (Photo by Fredrik_R, published with permission) 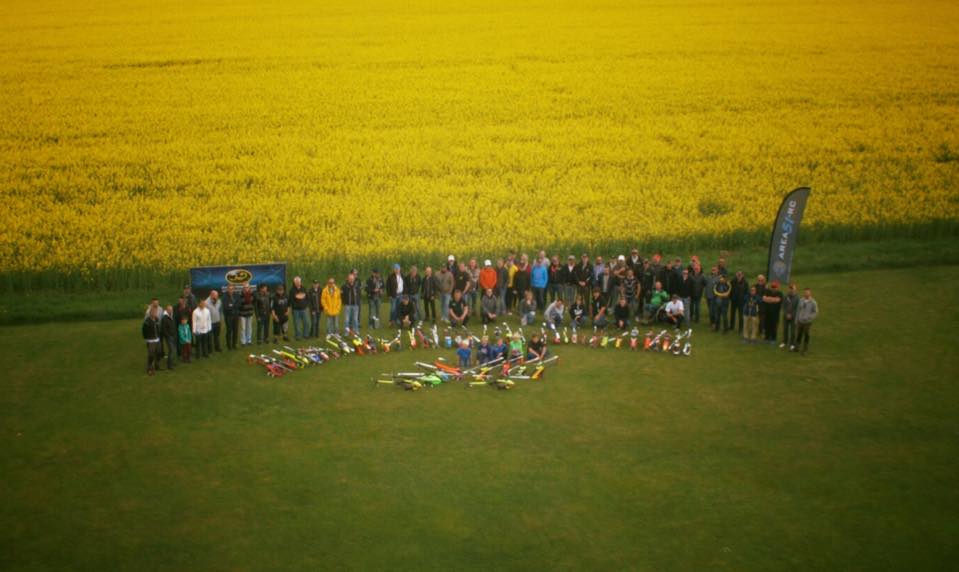 This video summarizes the feeling in Habo pretty well :)