How do you make throttle-channel active for the whole flight only if throttle-stick is in it’s lowest position when throttle-cut switch is activated? This is interesting brain-exercise, I saw this on some forum not long ago and it’s been on my mind ever since. Now I tried to search it and did not find it anymore so I thought that maybe it was this way. If it was not, well, this works. With Jeti there’s usually several ways to do things.

We could use a simple AND to make it as “when throttle stick is -100 and throttle-cut is off” but then this would activate during flight every time throttle stick is in it’s lowest position. So, that does not work. We need to get fuzzy!

Turned out it is simple, done with only two logical switches!

How to make Throttle Cut with dual safety

Control 1 is your throttle stick, make it centralized and proportional: 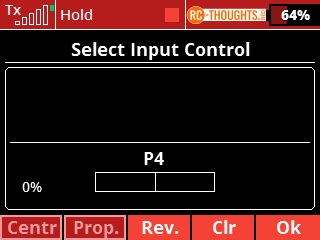 Control 2 is your physical throttle-cut switch. Make it so it shows as ON when throttle cut is OFF (you’re flying): 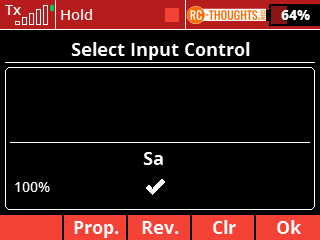 Now we can make the rest of the settings to the Logical Switch. We want Control 1 to be active when throttle stick is in it’s lowest position. So make it as “X is less than -97%”. Condition is “Multi” as shown below. Control 2 is as it is.

NOTE: If you use your equipment if hot weather you might have a non-working safety switch! If this is the case you might need to put “X is less..” value to -96% or -95%! This is due changes in component-values in warmer temperatures. 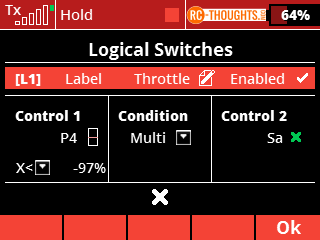 You are done with first logical switch. Now, let’s make the other one.

What we need in here is control 1 where we choose the logical switch 1 we just made, again, make it centralized and proportional: 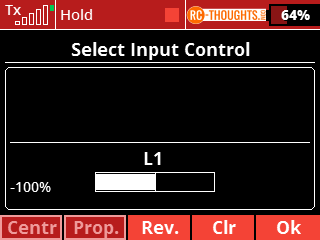 Control 2 in this logical switch is again our physical throttle cut switch, make it exactly the same way as in control 1:

Again, it’s time to tie it all up. Since our logical switch 1 is a MULTI-switch it can be OFF, ZERO or ON. We want to use only the ON, so we make the Control 1 as “X is bigger than zero”. Condition is AND in this logical switch and control 2 is again just control 2, the physical switch. 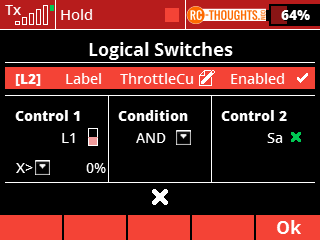 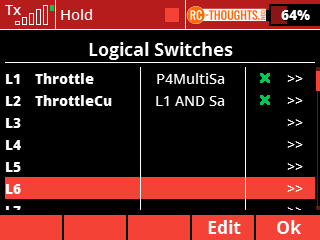 Now, activate your physical throttle-cut switch like you were to activate throttle. Keep your throttle stick still in the middle, what you see is this: 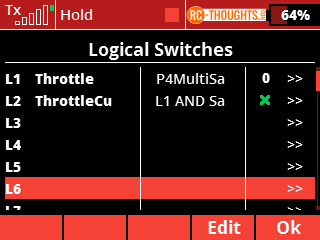 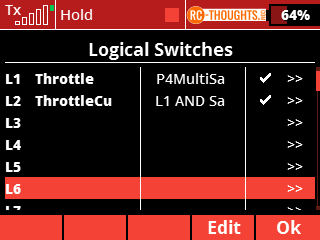 Use in transmitters Throttle Cut

Let’s put this added safety to good use. You could activate a hold flight mode with this if you wanted but using it on actual throttle cut might be better. In that way you can test all your flight modes without having the risk of engine starting to run in mistake. (Always, always test your setup for these anyway!).

So head on to “Menu” -> “Advanced Properties” -> “Other Model Options” and scroll down to throttle cut: 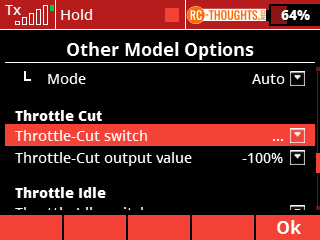 For the throttle-cut switch select the logical switch 2, but reversed: 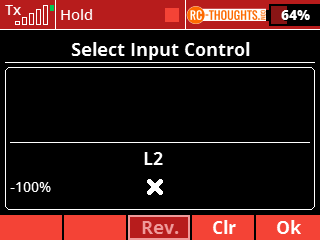 That’s it, your done!

Always make sure everything works as expected before actually flying your model. This is especially important on everything engine-related. RC-Thoughts or me personally are not in any way responsible for anything you do to yourself, your models or surroundings when using these how-to’s.