In 2016 I thought it would be fun to visit a Helimeet in Finland’s neighbour-country Sweden. And it was a total success, had a blast there in 2016! So, I had to visit them in 2017 too, and of course, it was time again!

As said, since I live in Tampere, Finland I need to take the Skodillac to Turku harbour on thursday evening and get on a 10-hour ferry-ride to Stockholm to be in Sweden on friday. As usual, some waiting in harbour is a must, enjoying the weather :) 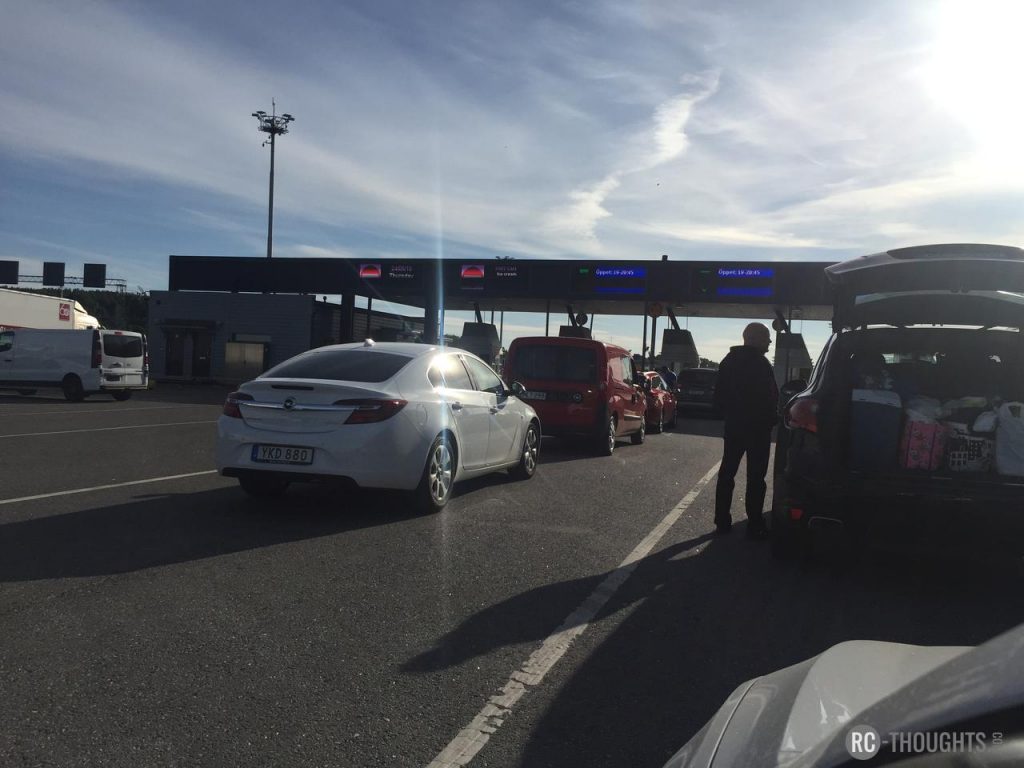 After driving to ferry it was time to relax and for the traditional “Waiting for cabin to be ready”-picture! 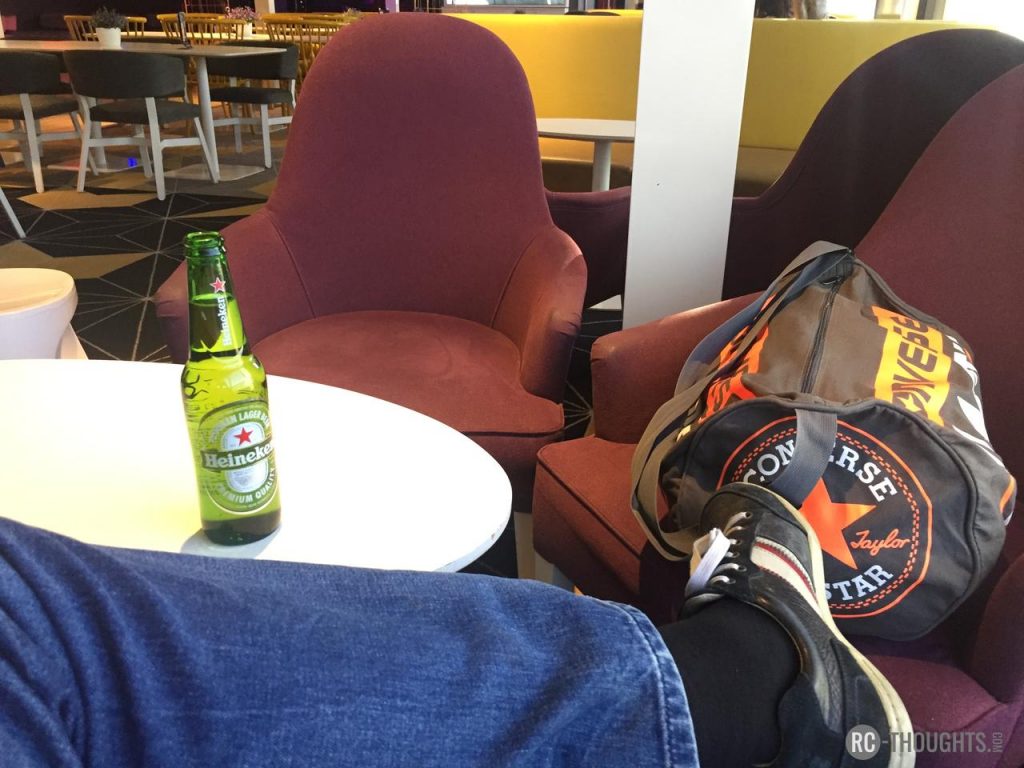 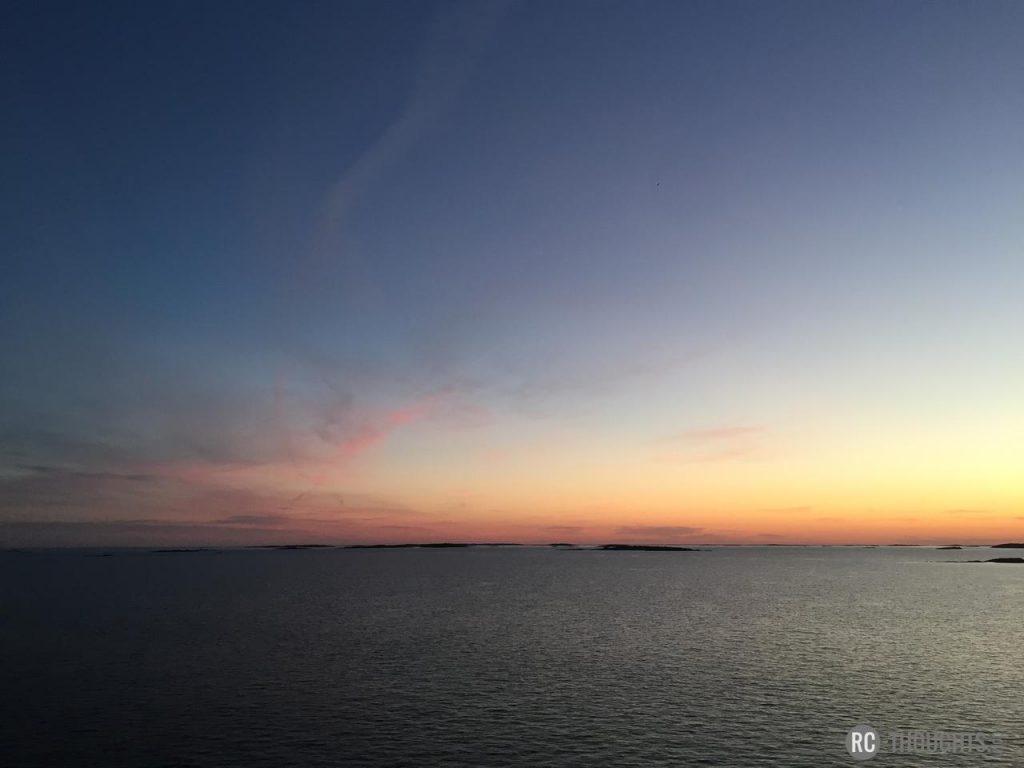 After a great breakfast on-board in the morning it’s time to get back in Skodillac and start the ~370km ride to south and Habo from Stockholm. Navigation is pretty easy, few turns at first after leaving the ferry: 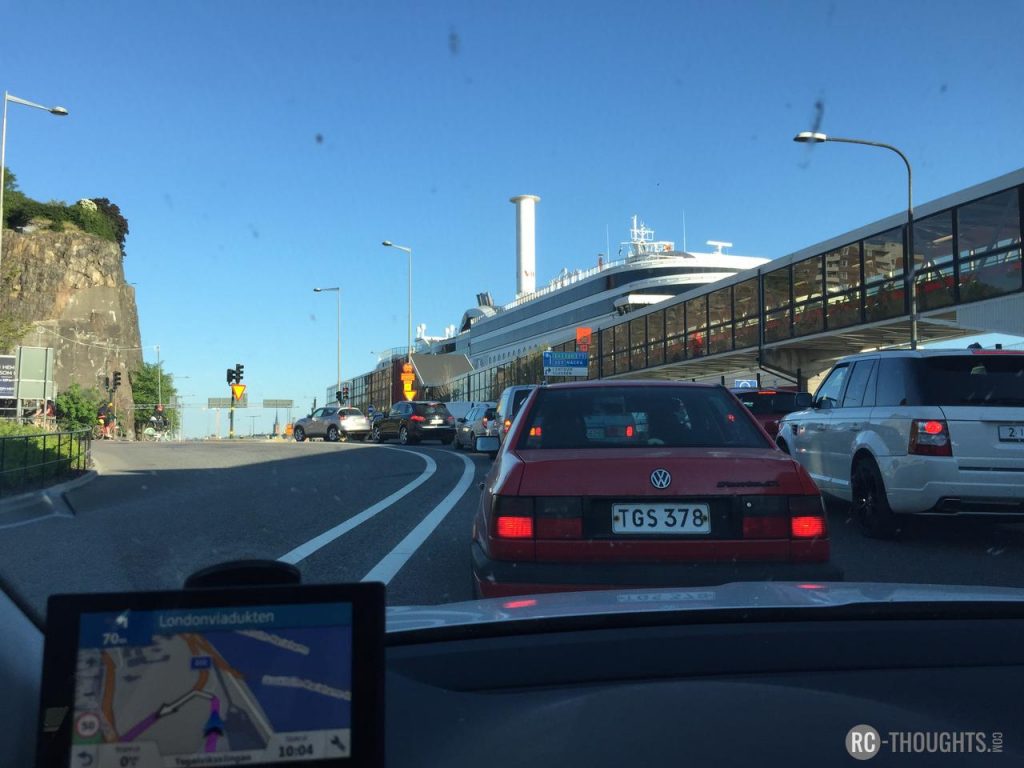 And then it’s basically “head on that highway for 3,5 hours, next turn in 320km” 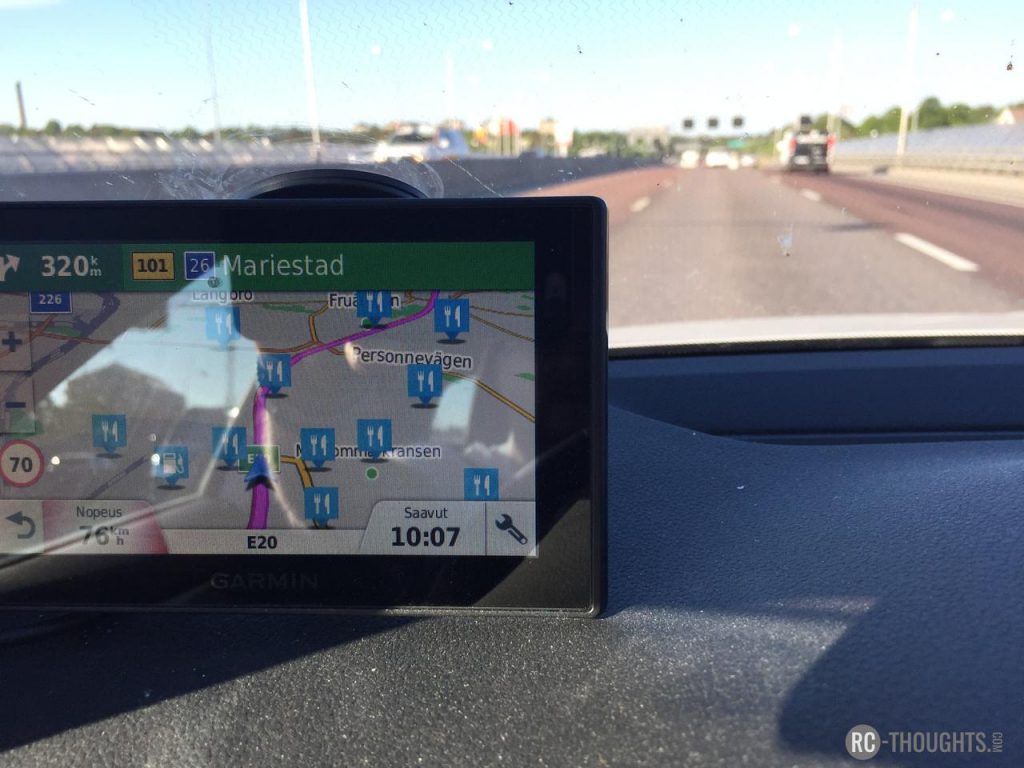 Arriving to Habo I found a big sign telling me we heli-dudes truly are welcome! 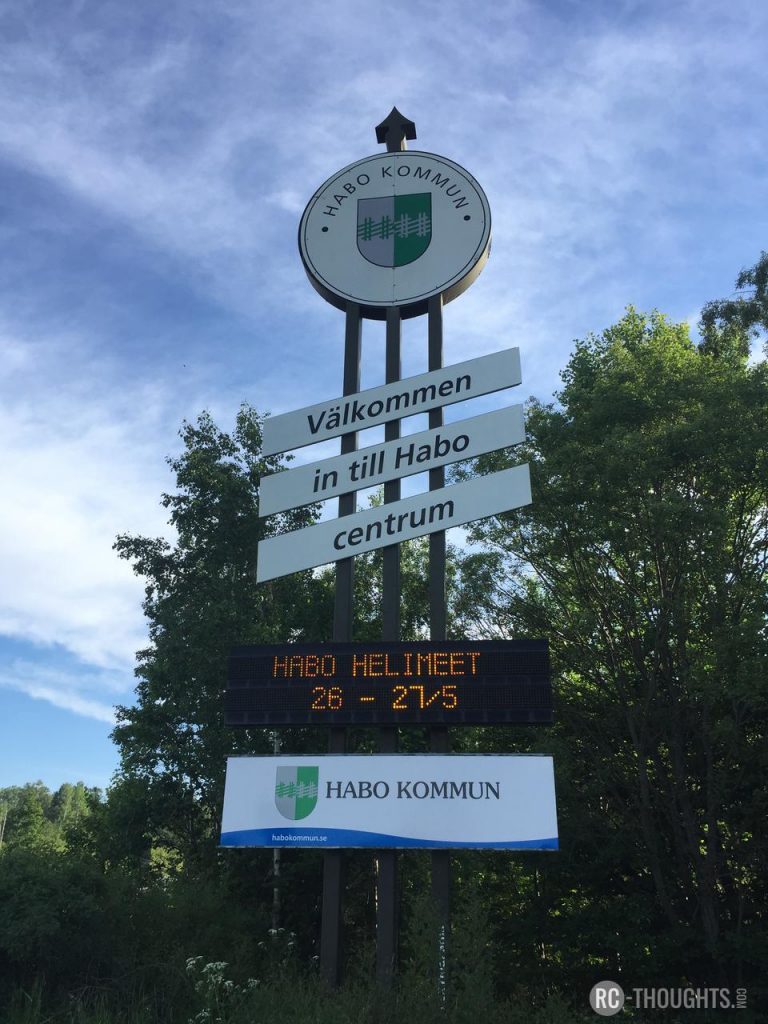 As all previous years I had booked a small cabin for myself for the weekend from Habo Camping, cheap and very comfortable with a terrace to have morning-coffee on for example :)

(Since Timo asked, cabin does have windows…)

And of course, the key to cabin is very Swedish :) 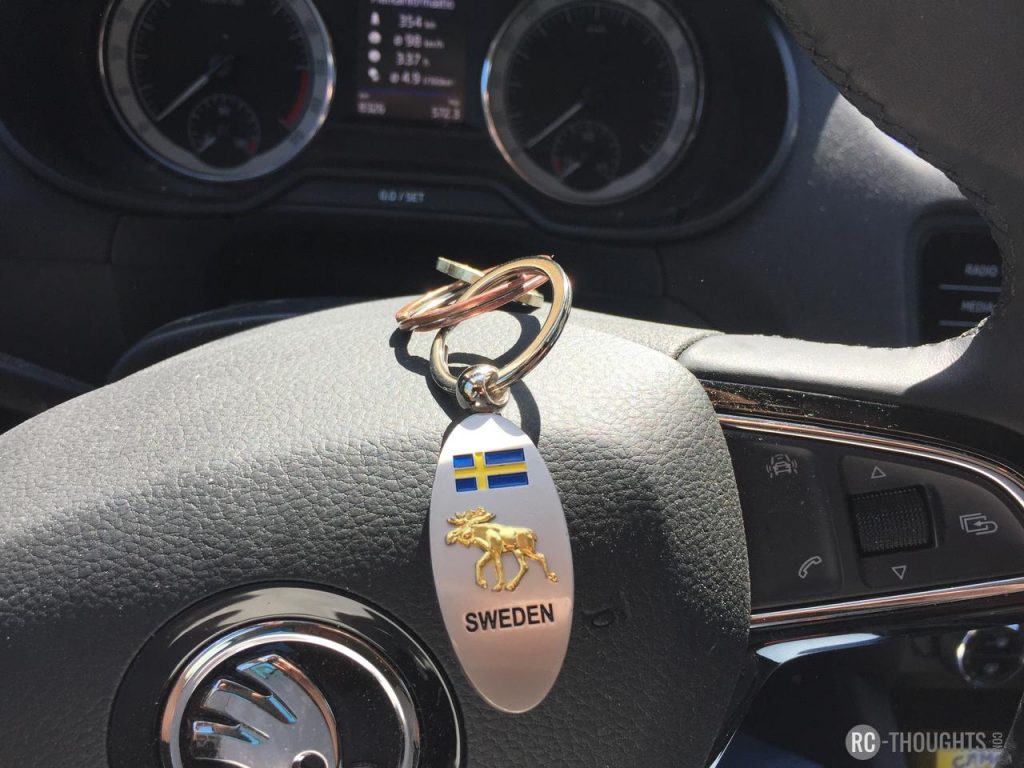 We were many, and we had a blast!

As usual, excellently arranged, and VERY popular helimeet! The meet is officially saturday-sunday, that means of course first one’s arrive to site on wednesday :) And place is packed on friday. And everyone is having fun, chilling, flying, chatting, enjoying the weather! 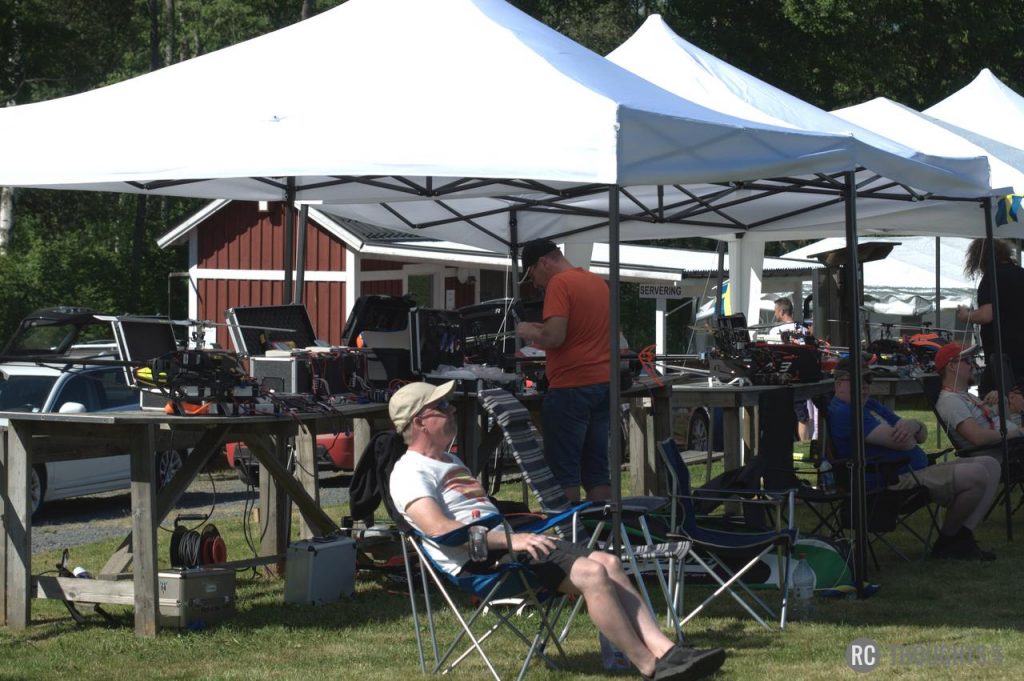 Did I say there’s only happy dudes in Habo? I told you guys, you are in my interwebs!! 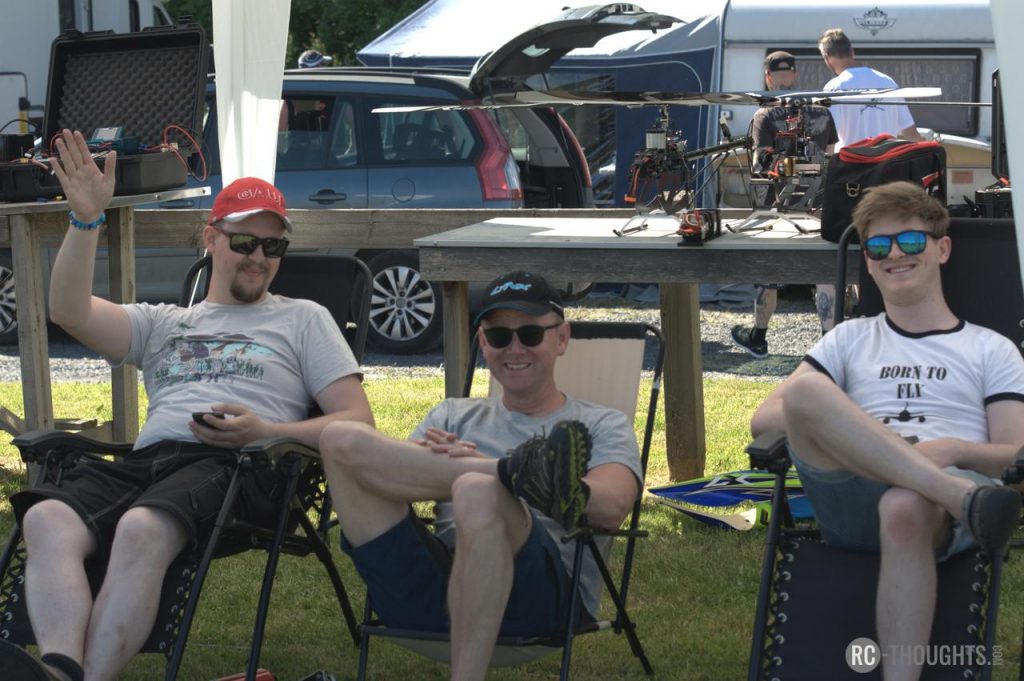 As usual, there’s some stranger people in a helimeet, it just have to be! This gang of guys came from Norway. Yes, they speak swedish, sort of… Had quite a lot of talks with these guys for a lot of fun. (No, I’m not gonna write what was wrong with your nitro-heli, not gonna embarrass you…) There was one issue, everytime a Norwegian get’s excited he starts to talk really fast. It’s like a machine-gun spitting out strange form of swedish. Try to keep up with that when you’re a Finn yourself… 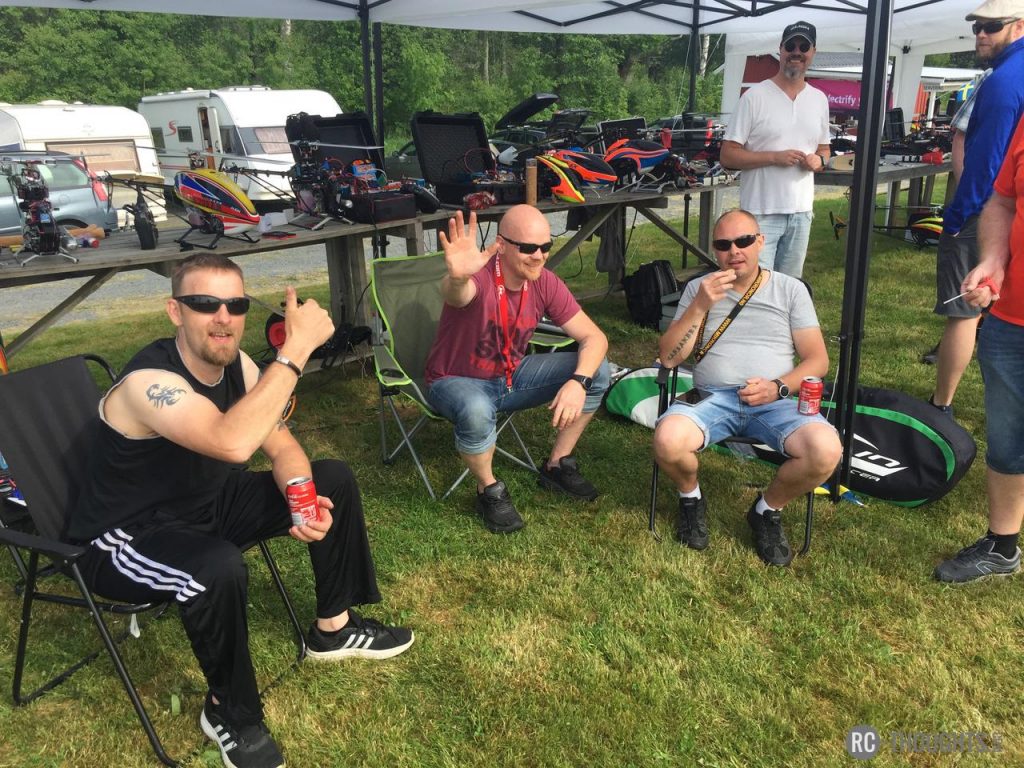 One of the most relaxed gang of people there for sure!

It’s not all about heli’s!

What do you get for the evening when you have Swede’s, Norwegians and one Finn? A guaranteed fun evening!  A few youngsters had great fun with some foamies, since we old dudes could only look in envy on their flying we of course started to yell to them to fly in all sort of difficult places in hope of guys crashing. In vain, they did not. But great fun!

I have no idea why these two look like this, but it show’s we had fun! 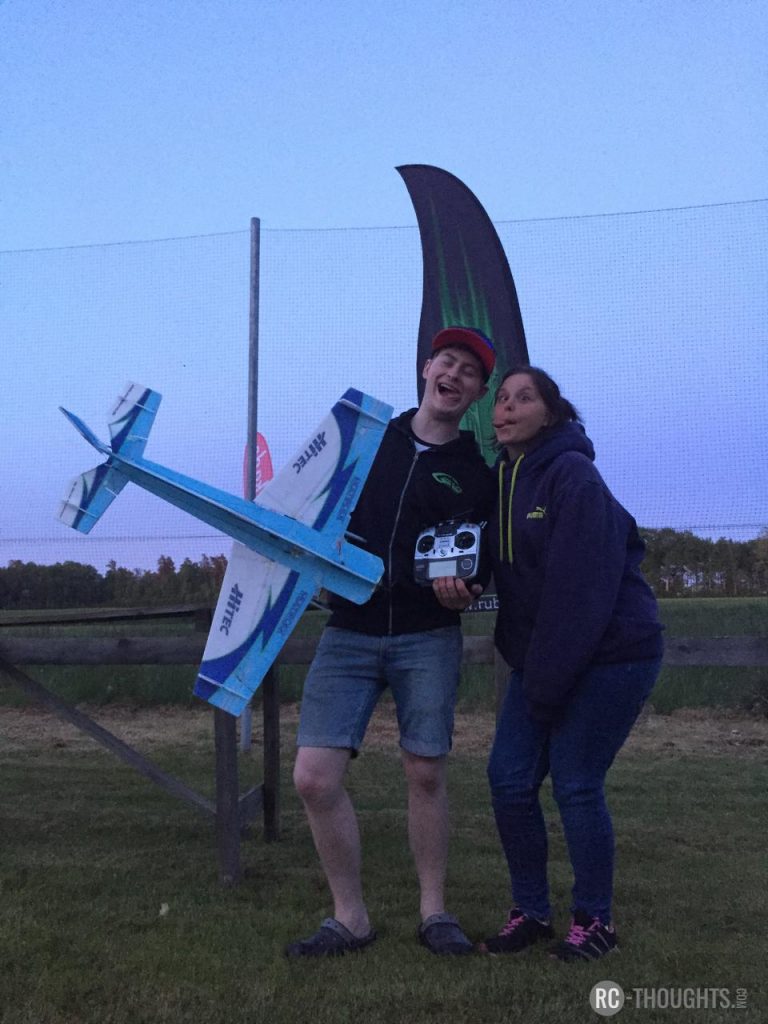 Of course in every meeting, no matter where and when, is that time when a bunch of people sit’s down and chit-chats, brags, and is just having fun. So is also in Habo, what’s better than a few sausages, few refreshments in liquid form and a campfire in the evening?

Legends. They do exist.

Every country has living legends in heli-scene, so does Sweden. I wrote about Helge last year, and after the visit this year we just need to talk a bit about Helge, again.

Always with a smile!

I mean really. Helge is always smiling and having fun. I did write about Helge last year but he really deserves more text… This year he had his son with him alltho I’m not really sure what kind of role-model Helge is what comes to flying helis :D They tend to break every now and then with Helge….

One good thing with Helge is that entertainment is always guaranteed! C’mon, I’ll prove it to you. Here’s Helge in the morning: 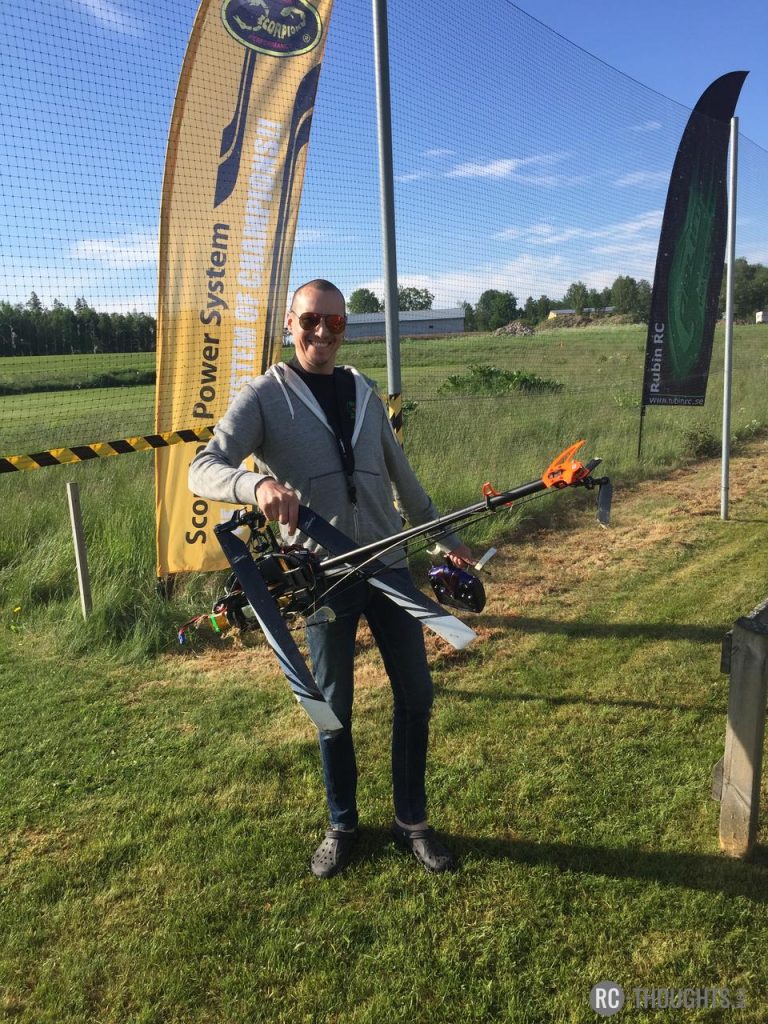 That was a pretty “casual crash” according Sir Crash-A-Lot himsef. But later. Some legendary things happened.

So, without further talk, let’s have a look of Helge later in the day:

In a quest of “To how many pieces can a Goblin crash?” Helge truly did an effort. The most spectacular crash almost all of us had ever seen. And yes, the word “spectacular” was widely used that day! About the pieces, let’s have a look just on the tail-boom:

Usually when you crash a Goblin the tail-boom is pretty much in one piece and it’s sort of attached to heli since belt does not snap off. That does not fly with Helge, tail-belt broken, tail-boom in pieces and we picked up parts from a 30-40 meter area. Did i already say the word spectacular?

There is a bunch of guys in Finland who have a team called TLR, loosely translated TLR comes from “usually it splashes around a bit when landing”, and they really do that quite often :) Since Helge is also exemplary in these “specialized landings” Alltho I’m not member of TeamTLR I though I need to officially hand over a TeamTLR sticker to Helge: 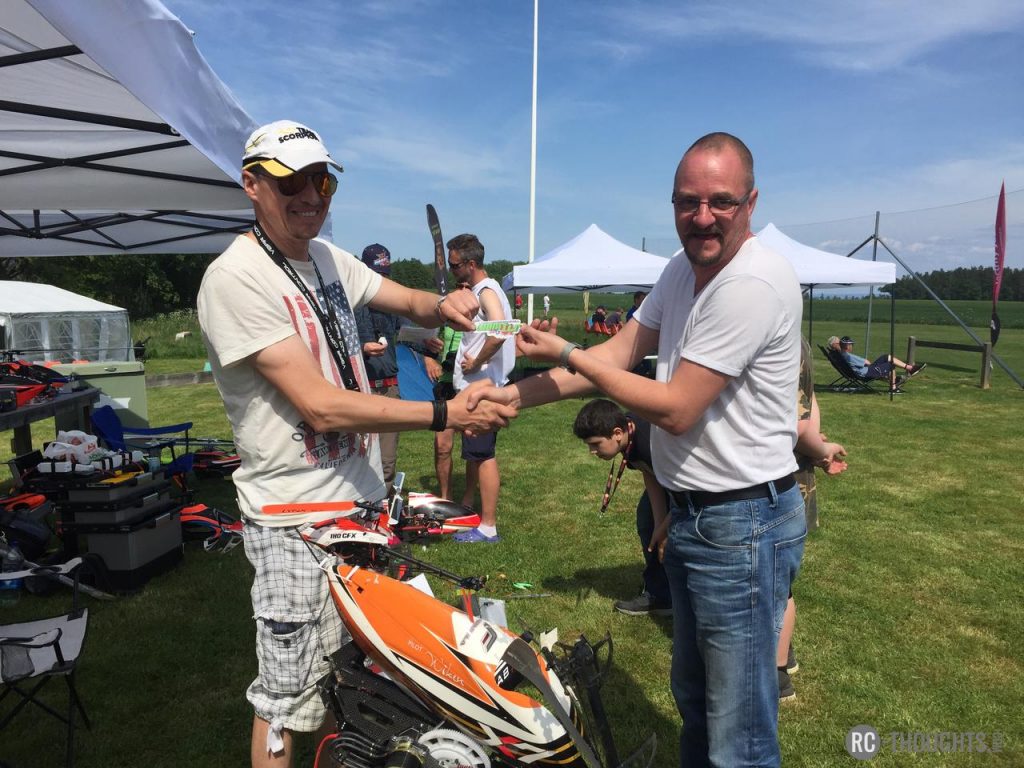 Helge – Artist of the year

What do you do when you have some crashed heli’s? Usually we tuck them away so nobody sees them. Helge the artist has different ideas. He makes Heli-art :) 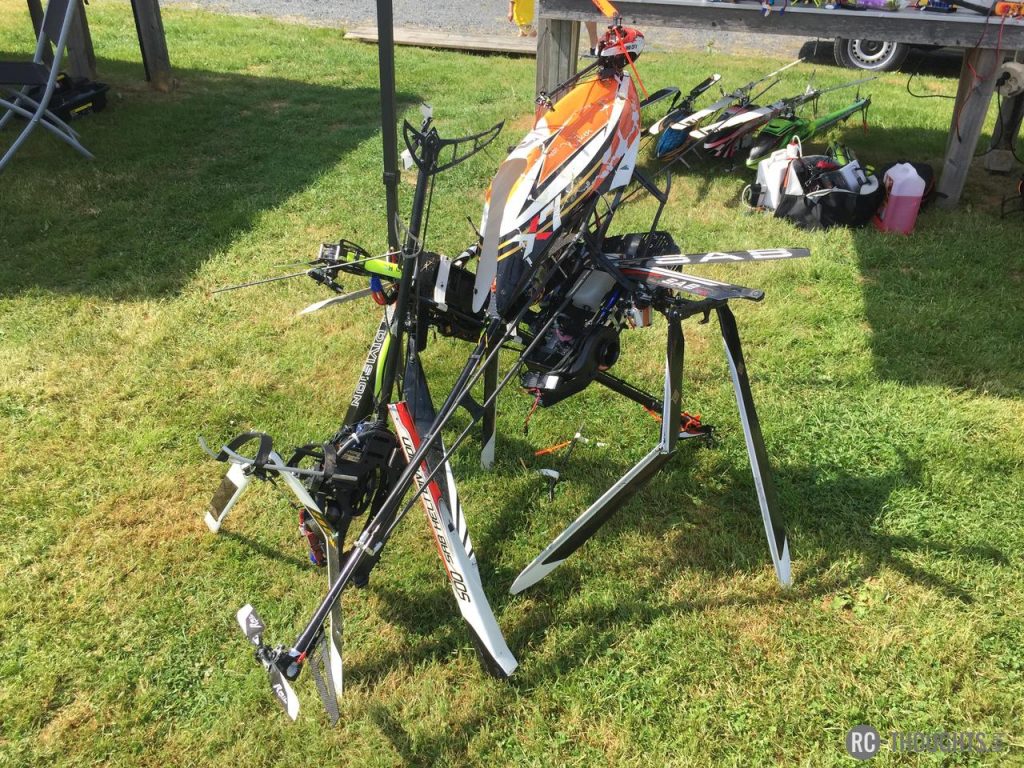 Yes, there were flights! As usual for Habo Mikado-team from Germany was there. Those guys really tease the crap out of the heli’s! Just check out this flight from Alex Wiehenstroth:

(Thanks to Roger for the video!)

We also had pleasure to to witness a “not-so-glider-like” flight from Helifanatics Wiken with his 4 meter glider with turbine:

Here’s the glider, slick and beautiful! 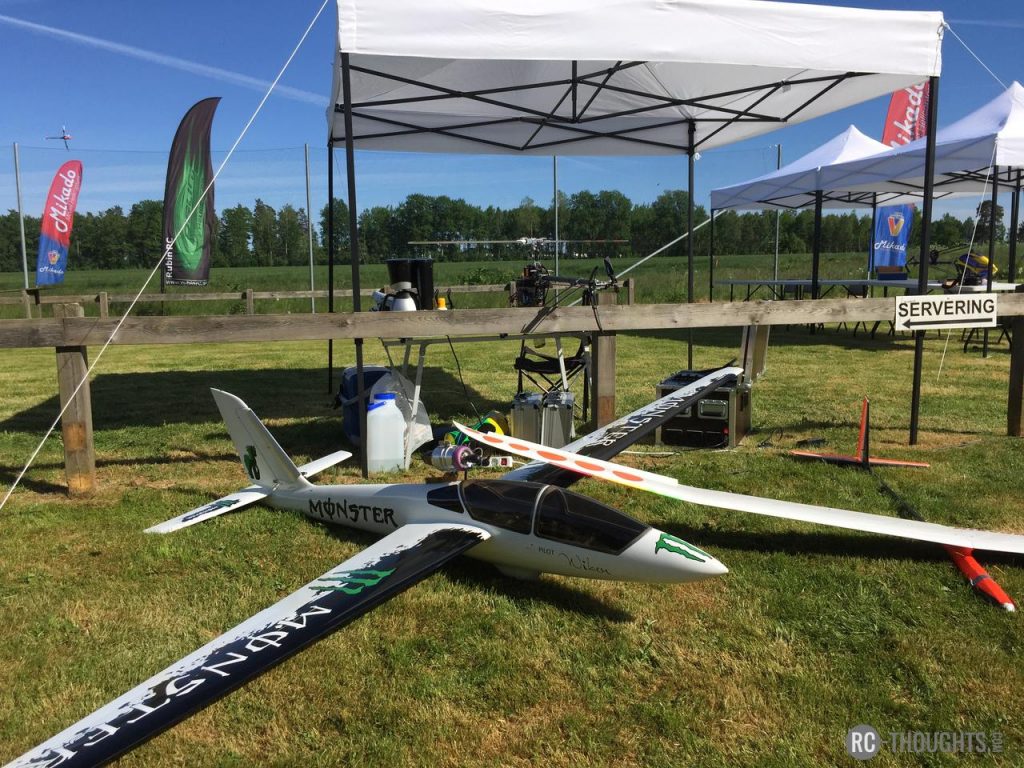 Specialities did not stop there. Miniature Aircraft was at Habo too, one particular Whiplash caught my attention. Yes, I’m a sucker for turbines, what can I say… 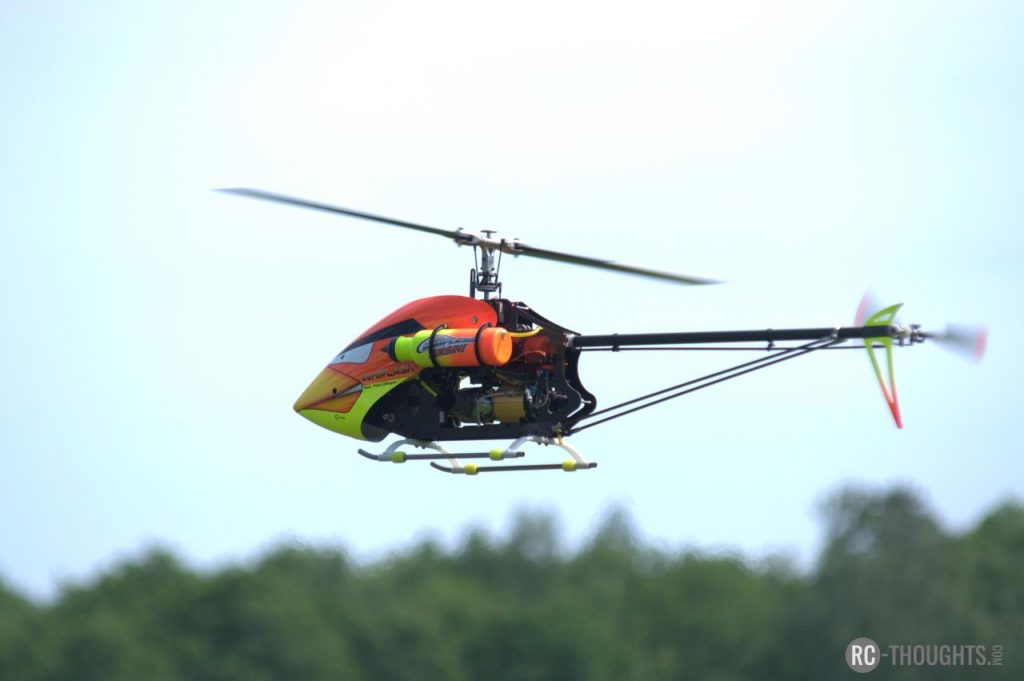 It was flown a few times, I just gotta add this picture of the pilot to make ZB over at Esprit Model in U.S. happy, Jeti Fight Club is present in Europe too! 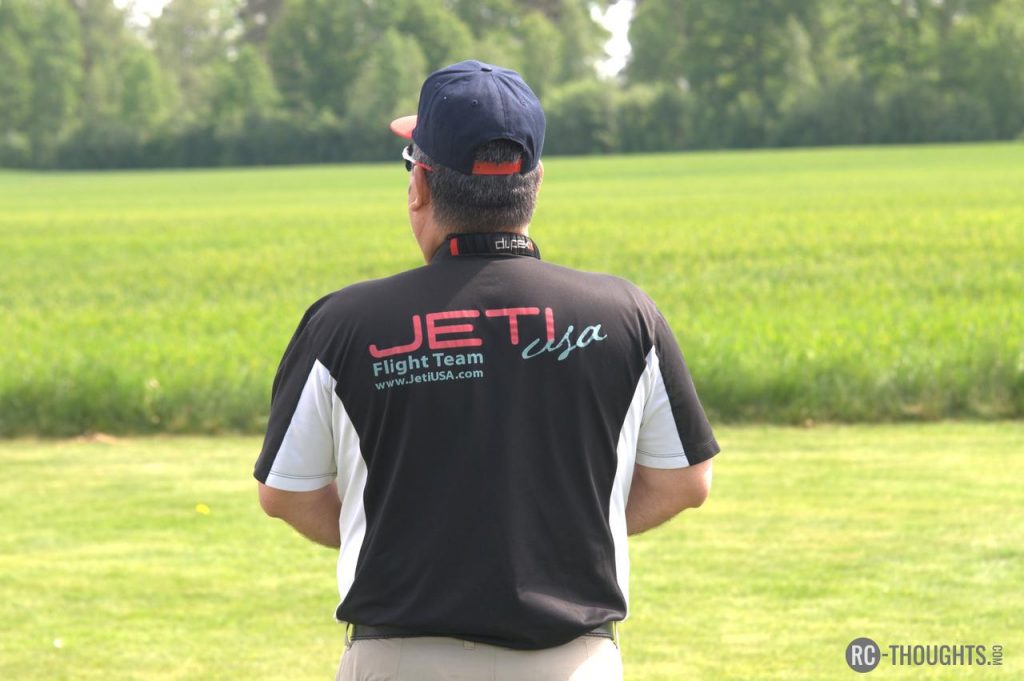 Helifanatics Wiken did have a go with it too, just look the face after the flight! 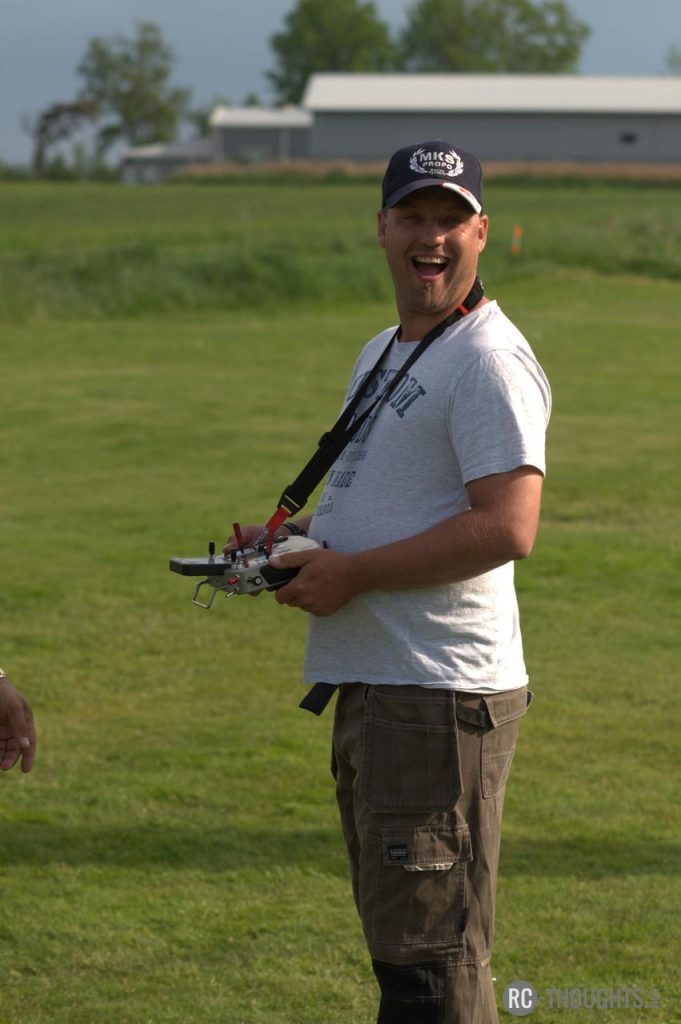 It’s also a known thing that I’m a sucker for scale-heli’s. Just look at this beautiful news-painted one: 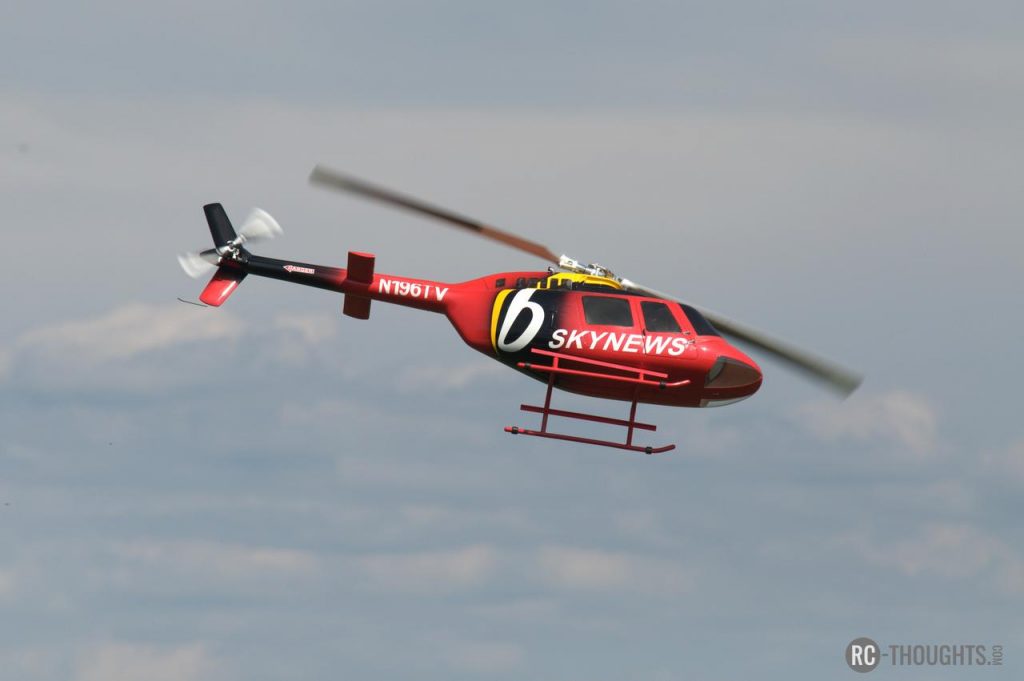 While we’re at it, since I personally can’t fly for crap pretty much only way to make my flight worth watching is to add some smoke :) This year I thought I need to make a “National greeting” to Habo. The colors in Finnish flag is white and blue. So it’s only natural to make one flight with white and blue smoke at the same time. Too bad my lipo’s are pretty much waste-material so it’s not that much of movement but we did have a lot of fun anyway!

(Thanks to Roger for the video!)

This bird has no issues taking two smoke-cartridges up in the air: 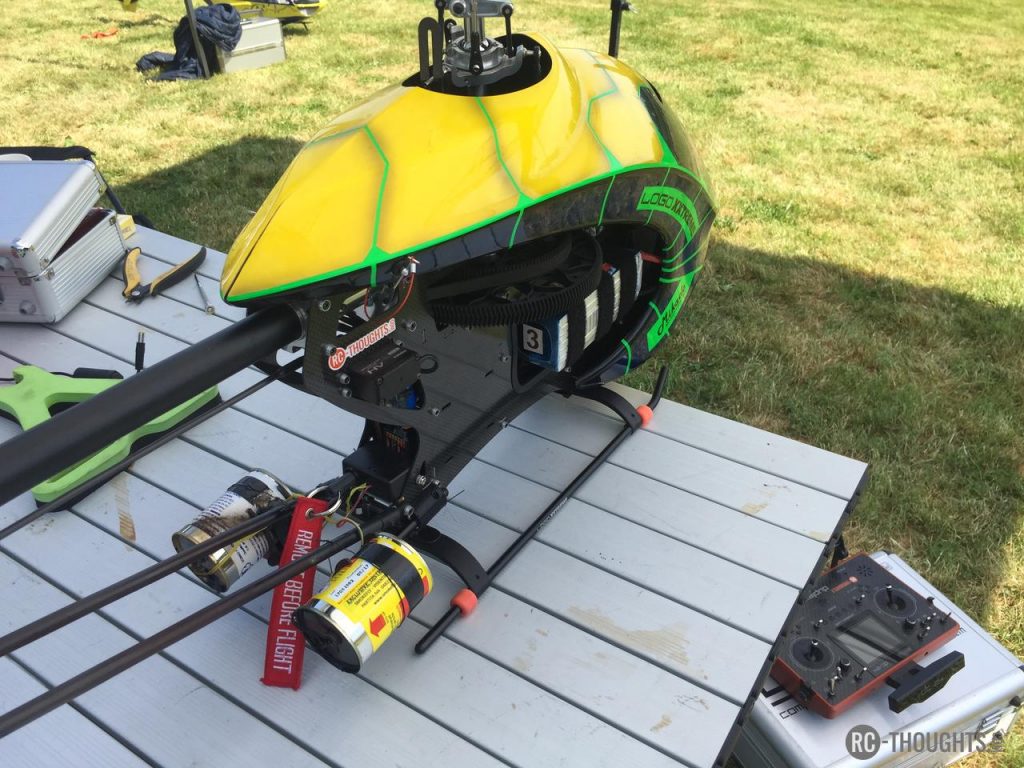 Thanks again to Carf Suomi and Ville for the smoke’s!

What comes to heliporn it does not necessarily need to be big. I did notice a bit odd Gaui X3. Since I never had one I could not pinpoint at first what was so special with it. Did find out later tho, let’s see if you can spot the oddities! 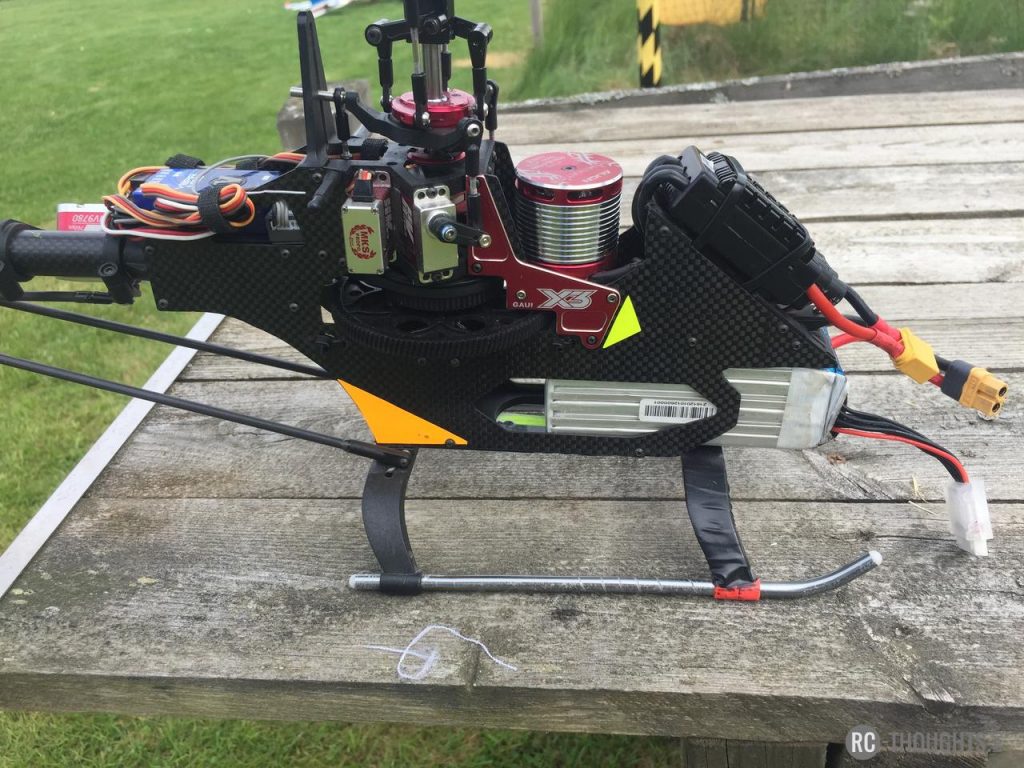 From same Gaui, having an X3 with 3-blade tail has to just scream “tail-authority”: 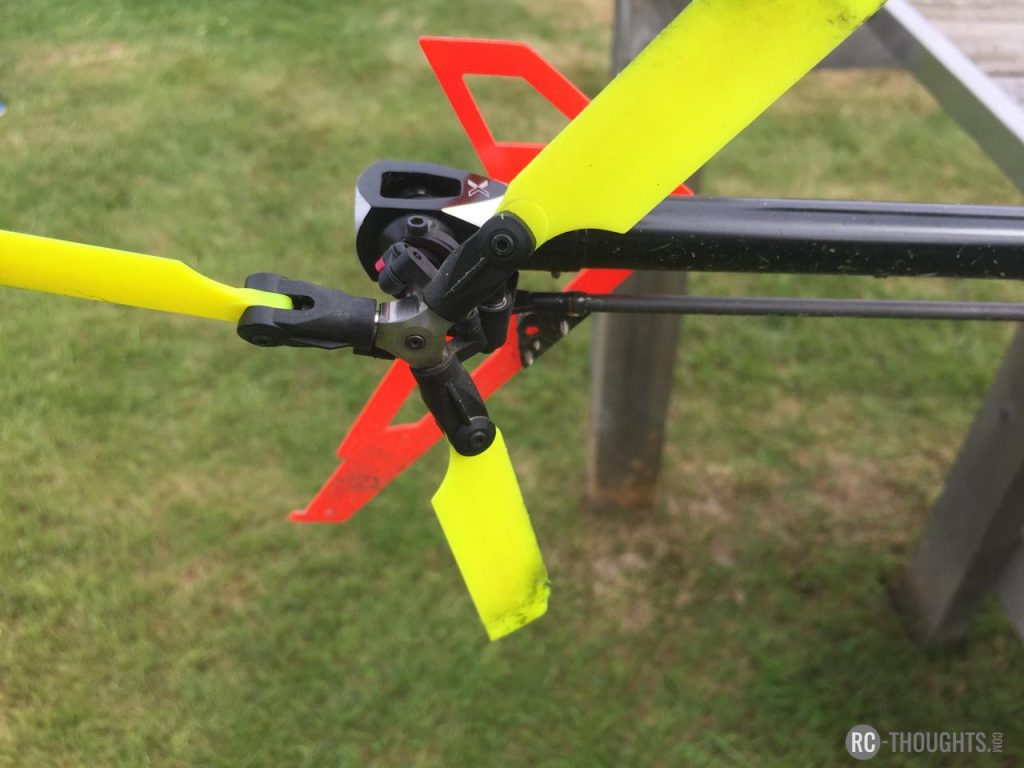 Oh, by the way. Suddenly there was a German gentleman in Habo. He took a heli from the trunk of his car and did a flight. 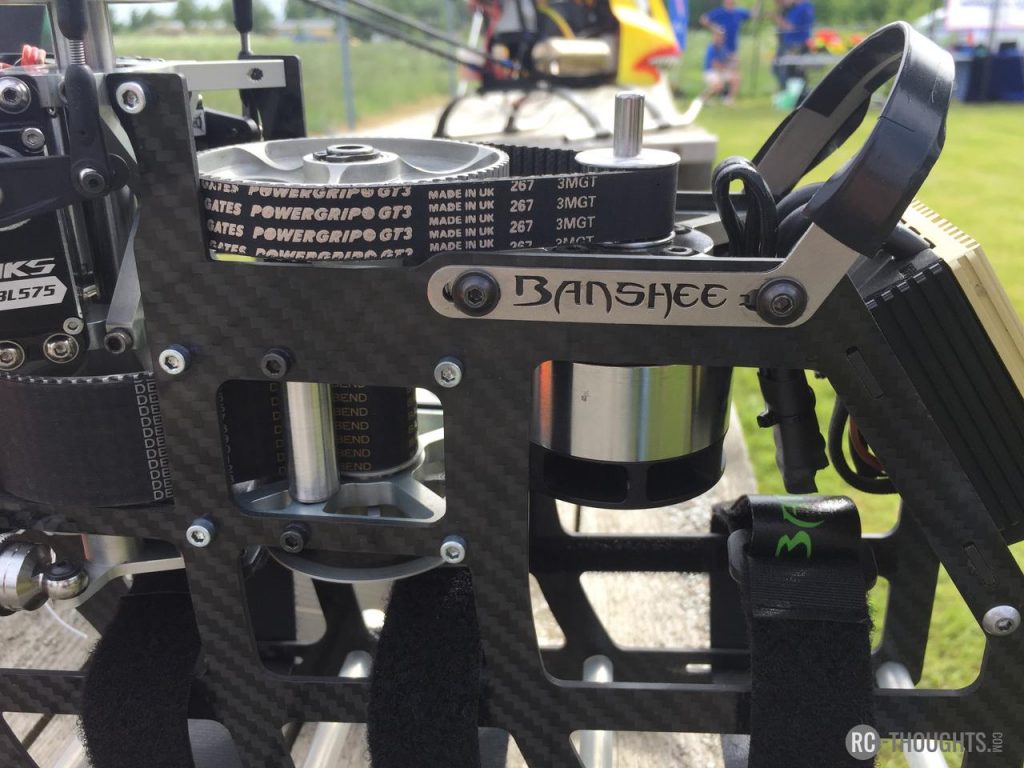 According him he was flying “carefully and high” since he just crash-repaired the Banshee. After his great flight I was left wondering “if that was careful and high I just gotta see the aggressive and low”. because he was NOT high of the ground with that thing :)

There’s always some mosquitos in Habo too. They tend to be quite big and just hover. Strange things. Fredrik took the group-photo with this little mosquito :) 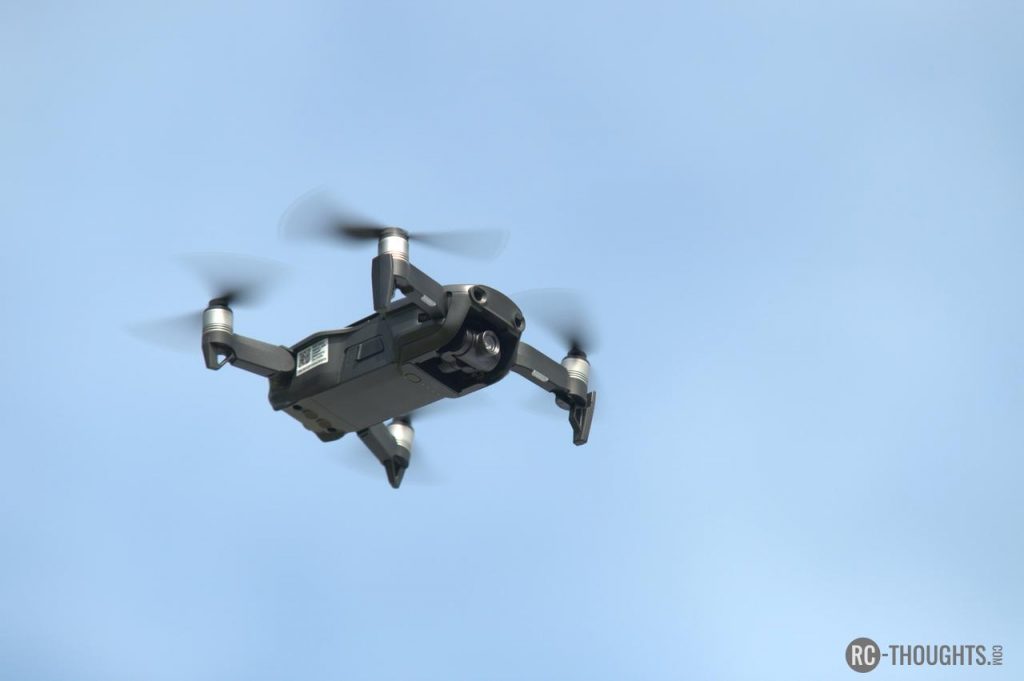 The facilities in Habo Helimeet is as always top-notch. Sören “Hustomten, The House-goblin” is one of the driving forces with EKAN and Fredrick to make sure we have a good time. Needless to say they overdid themselves, again! My hat goes off for you guys, keep up the great work!

One thing I simply love is the “Burger-Bar” they have, and this pic does say I’m not the only one! 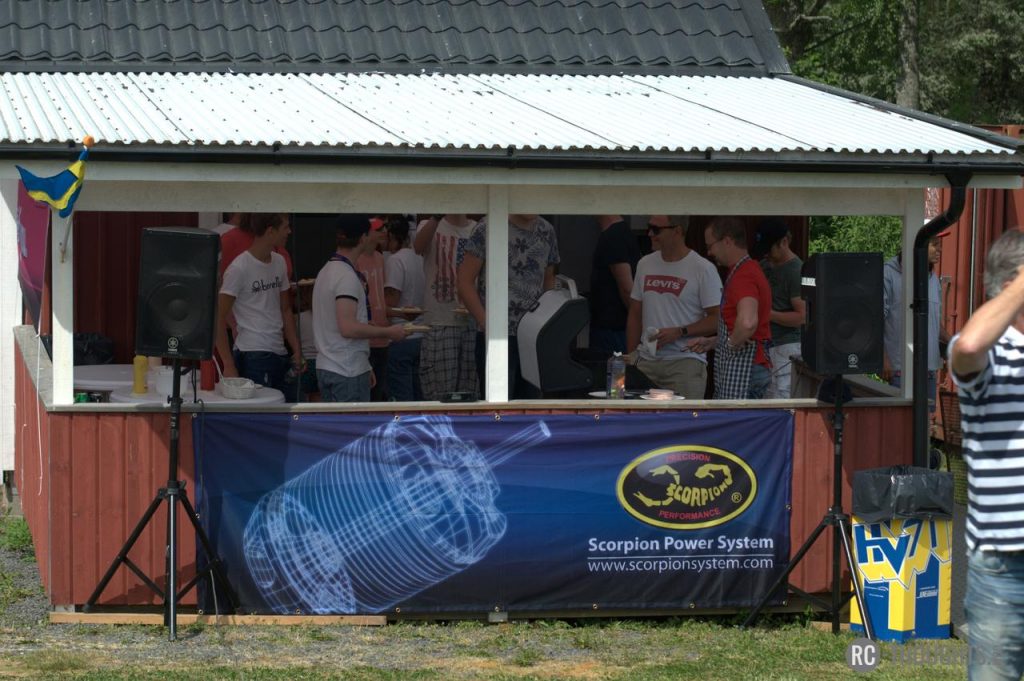 We heli-guys usually shout “loooooweeeer” to anyone flying their heli’s. Well, we did not shout it to this pilot, he knew it without us shouting :) 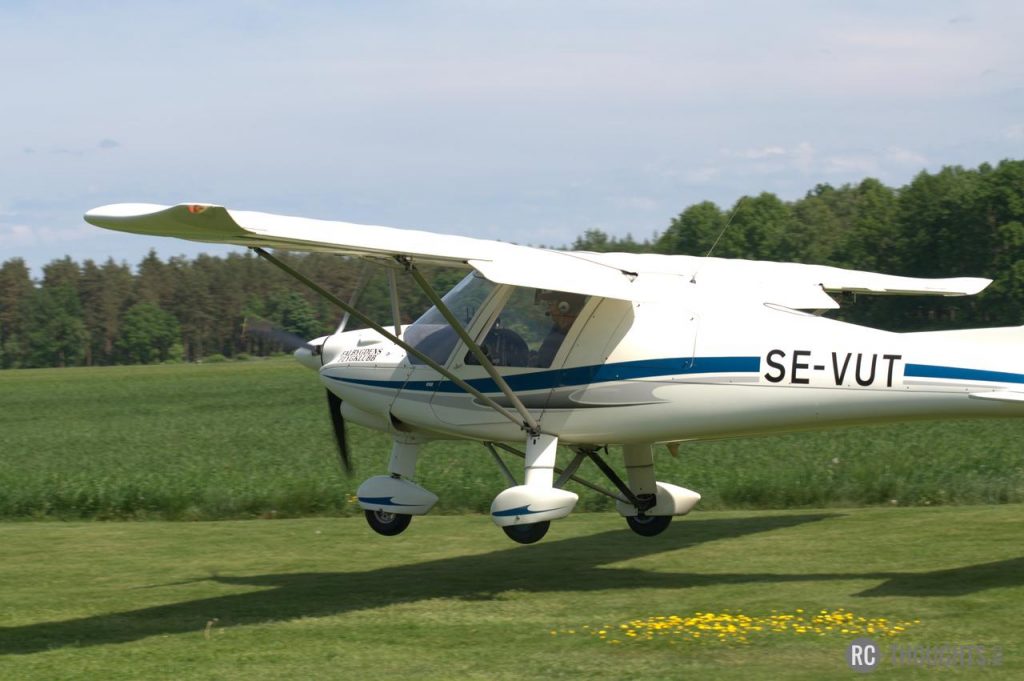 No, it’s not a landing or take-off, it’s called “Fly-by on low altitude”, wheels did not touch the ground :) Well done Fredrik fixing this, again!

One thing we have done before is to get together a few guys and drive to central Habo for a bite to eat together. We did so this year too on saturday evening, and once again a great relaxing time with a bunch of great guys! 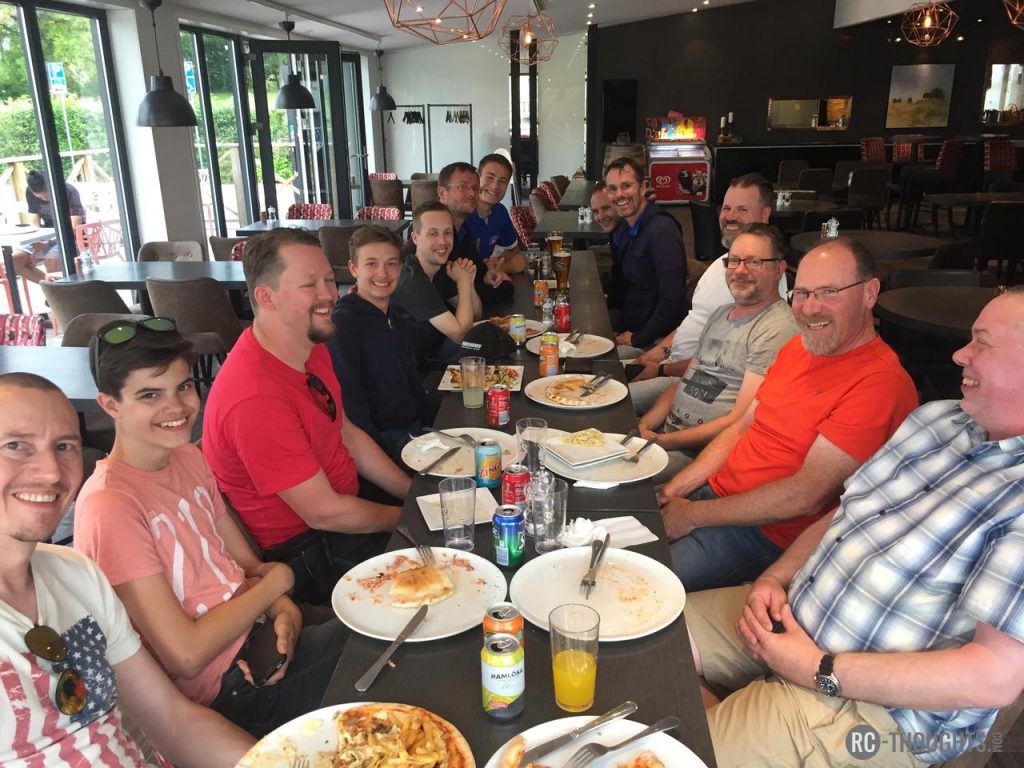 During the chat Ralf from Mikado asked if I was the only RC-helipilot in Finland. Of course the swede’s answered before I got to it. “No he’s not, there’s one more!” :) So you Finns out there, let’s get to Habo in 2019, right?!

Unfortunately all good things come to an end

And it’s time to get back home at some point. Get to Skodillac, turn on the AC and take the scenery-route first back to Stockholm. And with scenery i mean driving along the coastline of Sweden’s biggest lake. Couldn’t ask for more from a road-trip, great roads and great scenery! 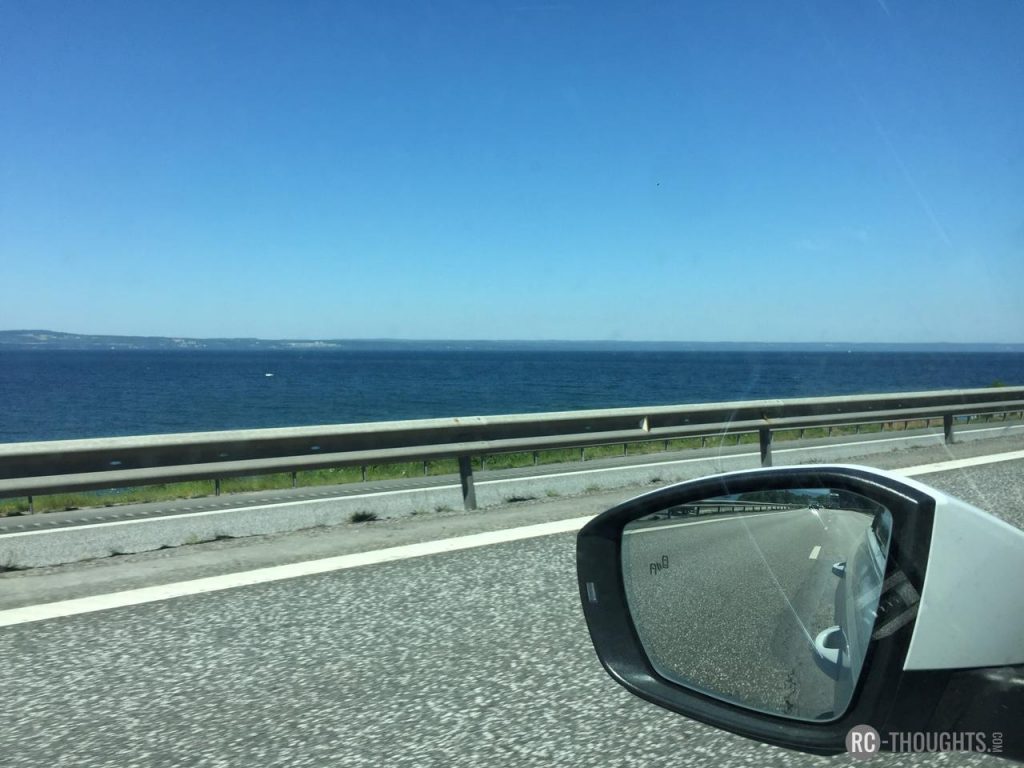 Once again, enjoy some chill-time in harbour…

And after getting to ferry it’s just the traditional waiting for the cabin to get ready” left before heading back to Finland. 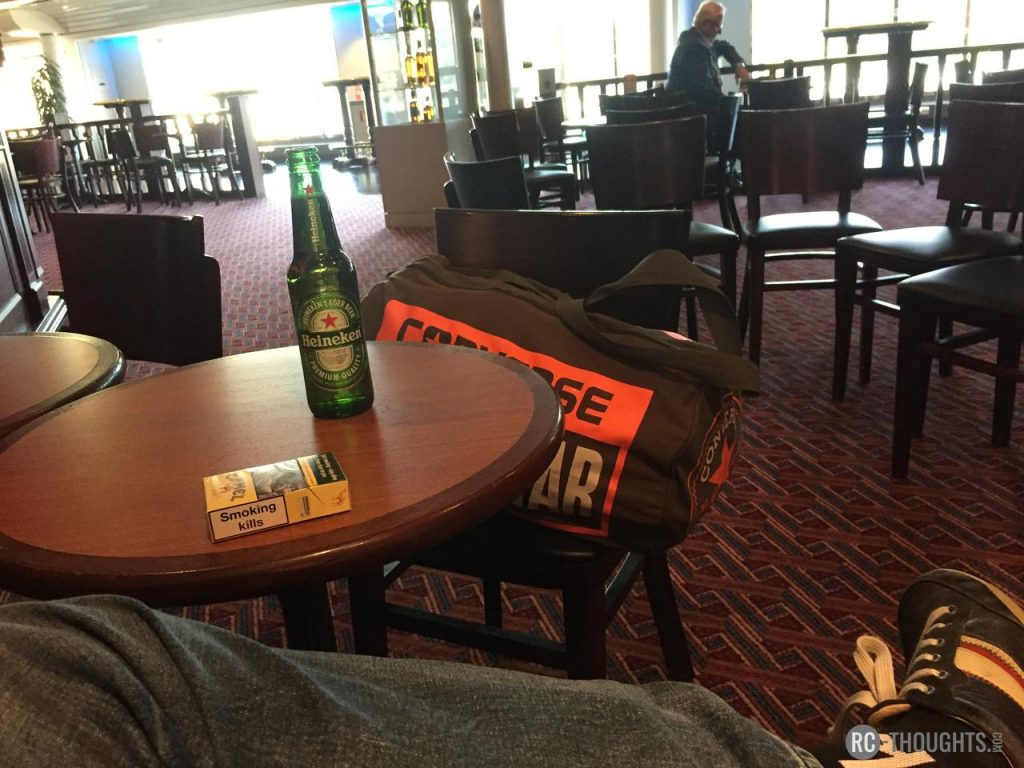 “So, how do you feel now after Habo?” “Tired but happy! Next year again for sure”

Not over yet! Small surprise coming!

I did two small interviews in Habo, Some Mikado news and “Mikado-thoughts” from a nice chat with Ralf Buxnowitz and also something totally different, I had a chat with Wiken about the concept of “Helifanatics” – Stay tuned!