In my opinion one of the best updates for long time, that’s for sure. Let’s do a quick run-down on what to expect.

Ability to smooth curves. This is something that I find very valuable, making better functioning curves is so much easier now, surely adds to even more precise control of channels:

Even more precise functions for dual rate and exponential functions. Also possibility to use them as proportional:

This is something I have waited and wanted for a long time, now it’s possible. A possibility to use trim-buttons as switches. There’s two possible ways:

The momentary 3-position is clever. up- and down-positions (or left/right) are active only as long as you press the button. As a heli-guy the rotary-function is where it get’s interesting. In the middle the switch value is 0%, after that every press up changes the switch proportional value with %-amount of defined trim-step. This means we can easily build a function for example for gyro’s bank-switching, flight-mode-switching or basically anything. In essence, it’s now possible to use trim-buttons as sequenced switch with up to 200 positions, how’s that for versatility?

Update also includes up-to-date bin-files for SBEC30D, MFlow2, Brain FBL, 3Digi, Vortex and Spirit. I have to say I really like the trend where more and more FLB-units are getting integrated. I just love the way I can adjust my Spirit straight from transmitter.

As usual, some added “small” functions too:

Oh yes. I saved this to last. DC/DS-16 will get LUA! In the beta-version I’m testing LUA-functionality there is two update versions, one “16-standard” and one “16-lua”. I do not know if this will be the case when update is released or what the differences between versions are but I know the LUA-version works fine for me in DS-16. The release of “LUA 16” does not have any mentioning of -14 and documentation only mentions 16 so it’s safe to say that -14 will not get LUA.

There are some obvious and some less-obvious limitations. The main difference between -24 and -16 is hardware as discussed many times. This is also the base for the limitations in 16 when compared to 24-series:

So, what’s new in 4.20 LUA and what can be done in 16? There are some very useful new command available, for example:

LUA-coding limitations in DC/DS-16 are dependent of a few things:

How does for example RC-Thoughts Jeti Tools apps work in 16?

Well…. Does and does not. Since I heard about the limitations I have tested the apps. For example the Momentary to Latching works fine with a very minor adjustment, had to remove the fifth control since four is max. Also the Snapper works just fine apart from a very small display difference that is easy to fix. 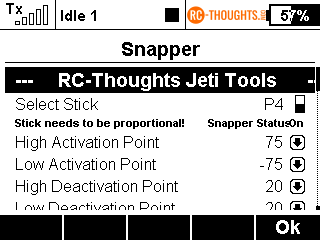 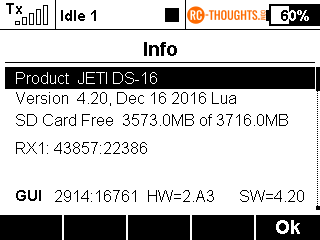 Others did not do so well, they failed to memory errors since they simply take too much memory. I did some research for some of the apps like RFID. As stated we have 30kB to use for LUA in -16, the RFID-application takes 89kB in runtime. I made some cuts like lowered battery amount from 15 to 5 and so on but only got down to something like 60kB which still is double of allowed. I do have some ideas how to make it work with enough functions to be useful but that will be a true uphill-battle where I just cannot make any promises. We shall see on that one. The 30kB is very little, but one thing is for sure, it’s better than nothing!

In my opinion, one of the best updates to 16-series in a long time. Very nice features we now can enjoy. I know there’s been discussions like “will 16 be forgotten by Jeti now that 24 is out?” but I think those talks can now be forgotten.

What comes to when Jetimodel is releasing 4.20 to 16 and to 24 with added LUA-possibilities, I don’t know. Jetimodel is as of today off for holidays until 30th this month so I think it might be safe to say that the update will be available “next year”. I kinda like that, give’s me some time to work on the LUA-apps for -16.