Every year there’s the traditional autumn camp in Selänpää airport (EFSE) near Kouvola. Traditionally it’s in the beginning of September and this year it was 4-6.9.2015.

The blue dot in the map is the location Selänpää airport. 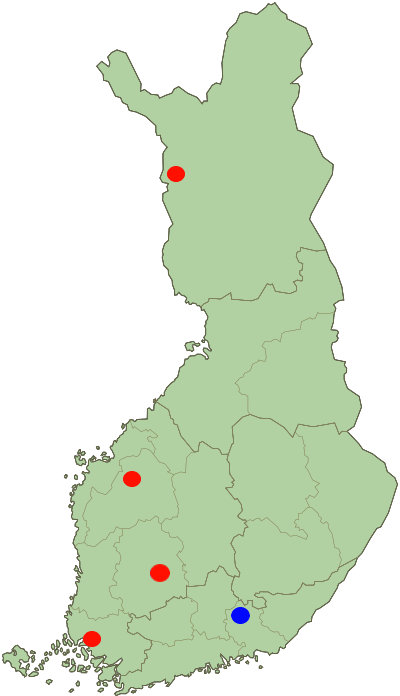 Unfortunately weather was really bad this year. I got there on Friday late afternoon and instead of going to field I drove straight to our accommodation in Aholan vierastalo, I had to finish the programming for the competition on Saturday. (More of that later).

After  a good evening with friends, some sauna and so on we got up early on Saturday and drove to field. To rain.

And so on. Sometime around mid day there was a huge shower of rain, it came so much the land didn’t even take all the water in resulting in huge small “lakes”, and yes, they practically were lakes :) 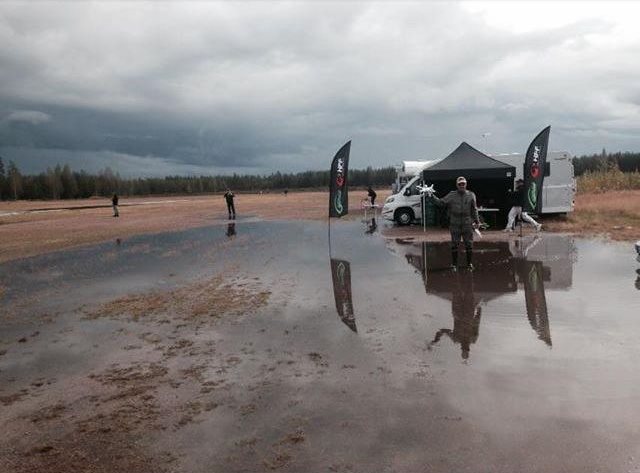 As you can see, it was not the “Sunny Finland” that day… (Picture by Maikko)

There is a tradition on autumn camp that the “Inofficial annual Autoration Finnish Championchip” is held at Selänpää, so this time it was time for the fourth one.

The rules are pretty simple, fly high enough, shut down power and do a autorotation as close as possible to a white ca. 20 cm diameter dot on the ground. The goal is to land to center of the spot, center is marked.  The distance is measured from the spot center to the place where main shaft would touch to ground.

Traditionally the competition is of high quality, both with results and with entertainment value, and so it was this year.

I did the result service computer-based as last year, unfortunately my Friday night coding was not, um, “so clean” so the bigger class had to be done manually. No issues however, we still got the official results.

There’s two classes, small and big, the big class has 600-class and up, smaller the rest. This year we had also great prices for the winners, Matti Häkkinen did a fantastic job on contacting companies. In the bigger class HeliFly Finland (Importer of SAB Goblin in Finland) donated a Goblin 770 kit to big class winner!  Unheard of in Finland so far, huge thanks to HFF for that!

So, for once some luck, when taking the names of competitors the rain slowly stopped and we got to do the competition without rain. Like always, HUGE fun ;)

The level of performances was, as always real good, with unbelievable result in big class for the winner.

The winner, Pekka, landed only 55 millimeters from the center of spot, that’s only two inches for you US-readers. Pekka flew Thunder Tiger Titan X50 nitro, check out the video of pre-flight, winning flight and price ceremonies below. Congratulations to Pekka and of course to the smaller class winner Zxiicci!

Results are available for the small class here and big class here. The results are in centimeters.

One more tradition on autumn camp is to have a playful competition of some fun-sort with helicopter-guys and RC-glider guys who also had their camp at the same time.

The race was easy, four guys from both teams, fly a nano-quadcopter in two 8-patterns, make flip and land, fastest wins. Four guys, everyone races everyone once, that is 16 races. And I’m very happy to announce that heliguys took it 11 to 6 against gliderguys :) No more shame on us…

(By the way, “Ege” is a gliderguy who used to be heliguy…)

My beater, the T-Rex 500 with “way too much rpm” was a bit unlucky, on first flight I took it up in the air, put idle2 on (around 3400rpm) and watched in disbelief when heli tipped over to perfect inverted position and was staying there. Only thing was that I did not flip it :) It did not respond to any input either so I pulled hold and watched it crash to ground. Well, it happens, it’s a beater…

The big bird, 800 Xxtreme with belt-drive is still on “test-phase” regarding the belt-drive to rear so I took it pretty easy with it, however no issues what so ever during whole camp. Due rain not so much flights but I’m beginning to trust that bird again and enjoy flying with it.

So. Next year again? For sure!