On the side of DC/DS-16 there’s sliders that can be used as channel-controllers. I know at least some who use for example breaks on airplanes with these.

But, they can be used as 3-way switch also, and really easy. This started from forum-thread (once again…) where one guy wanted to use it like this but it really was not making progress. So here it is.

What we want to accomplish, this is what logical switches look like when moving slider up and down:

What does this mean? When slider is up, down or in the middle only one logical switch is activecreating a 3-way switch. So cute and simple :)

This is actually very simple: 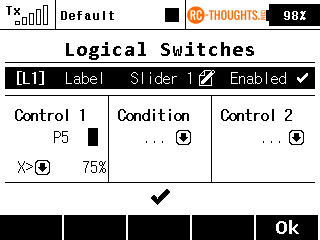 Assign wanted slider to it as follows, use proportional: 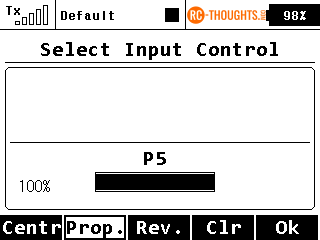 After that adjust the rules for this as “X bigger than 75%”:

Next is the middle, once again make a new logical switch, use same slider as proportional. Difference is the rules, you need to have two rules: “X is smaller than 75%” AND “X is bigger than 25%”. This means this switch is active when slider is between 25% and 75% value, this means middle. 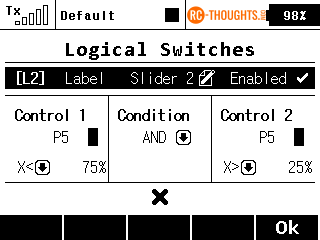 The last logical switch is again almost same as the first, only difference is in the rule. Once again, use same slider as proportional and assign the rule as “X is smaller than 25%” 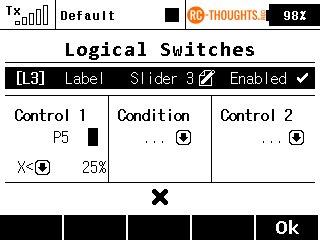 NOTE: You may want to adjust %-values according your liking. When assigning the slider to a function you can see the percentage-values, use accordingly. THis picture is somewhat close to these values: 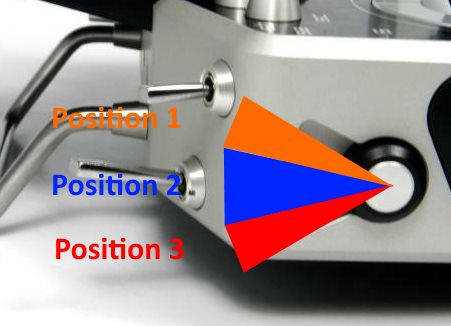 You can of course make this as 4, 5, or why not as 10-way switch by just adding logical switches with different percentage but it might be hard to “hit” the right spot. 3-way is “safe” since it’s notched in the middle and other two are “all the way up” and “all the way down”.

There you have it. Slider as 3-way switch. Now assign the functions as you wish and go out and fly :)