What are we talking about?

For a long time VBar helicopter-gyro from Mikado have been considered as “top of the line” and have by many been the gyro to compare to. It’s been evolving through the years mainly with hardware-revisions from blackline via blueline to silverline. Of course the software and control-loops been reworked also but that is not the changes user sees so much.

Now Mikado have done something new. The traditional VBar-units were divided to “big” version with separate sensor and “mini” version with integrated sensor like the “traditional” gyro we all know today where everything is in one box.

The new VBar NEO is brightly colored sleek blue box with some changes compared to old one. Sensor is built-in but there still is a version with added separate sensor. NEO-sensor is in same casing as silverline-sensor is/was and the blue sensor is also interchangeable to silverline. Actually a friend who bought silverline a month or so ago got a NEO-sensor with it, that unit was bought from Mikado. The sensor in NEO is actually two different multi-axis sensors, this should give more accurate control of heli when there is (?) a common value calculated. (<- that is my theory but it would be wise to do so.) 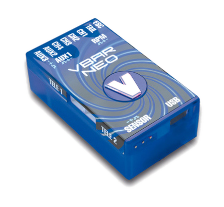 Since the main unit is the same in all configuration in difference to the old full-size vs. mini both versions have all the inputs & functions available.

The revision with sensor looks familiar: 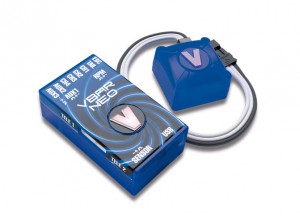 What this means is that there are two basic versions available:

The version without gyro is the NEO-unit without external sensor, this means it can be used where mini was used before. Size is just a notch bigger than the old mini. The version with separate sensor, “gyro”, is meant to be used where there is a raised possibility for more vibrations like nitro, turbines and so on. Also one of the differences between versions when comparing to old full vs mini is that since the main unit is the same there is possibility to use governor and 4 swash-servos in both configurations. Also both versions now have the same amount of outputs. (9 that is.)

One thing I do not like is that Mikado decided to leave serial port out. That means no more bluetooth-connectivity on the field.

The way software-licensing goes is again the same. What you get when you buy a NEO from store near you or from Mikado is again the Express-version without all the bell’s and whistles. But you still get a lot, actually more than before.

Express version now has bank switching and electric governor, these were previously only available on separate Pro-license.  With NEO the Pro-license now includes the Pro-functions we all know as “Doctor’s hat”, separate pages in setup where one can fine adjust values and/or adjust values not accessible otherwise.

New feature in licensing is the “Pro rescue” which adds exactly, the rescue-function. Rescue have been widely debated lately on forums if it’s useful, needed or whatever. Critic is that it slow’s learning, those who like say it saves heli’s and let’s you fly more and so on. Anyway, the function is so called “full rescue”, that means when activated it flip’s heli upright and regarding setup gives positive pitch. This then gives time to pilot to gain control over the heli again. One thing to note is that rescue-function does not turn tail, so if there’s a beginner that has problems with orientations (for example nose-in) this does not help so much, it may prevent a crash anyway.

VPlane is available on separate Pro license, that is not going to be discussed here since it only works with VBar Control transmitter at least at the moment.

Pricing is at the moment on Mikado’s shop (and VStabi) is as follows:

Reason for the delaying of release for NEO for us non-Control users was that Mikado needed to improve on copy-protection for the new product. But now it’s out, let’s have a look whats new. (Well, the color is now bluish…) 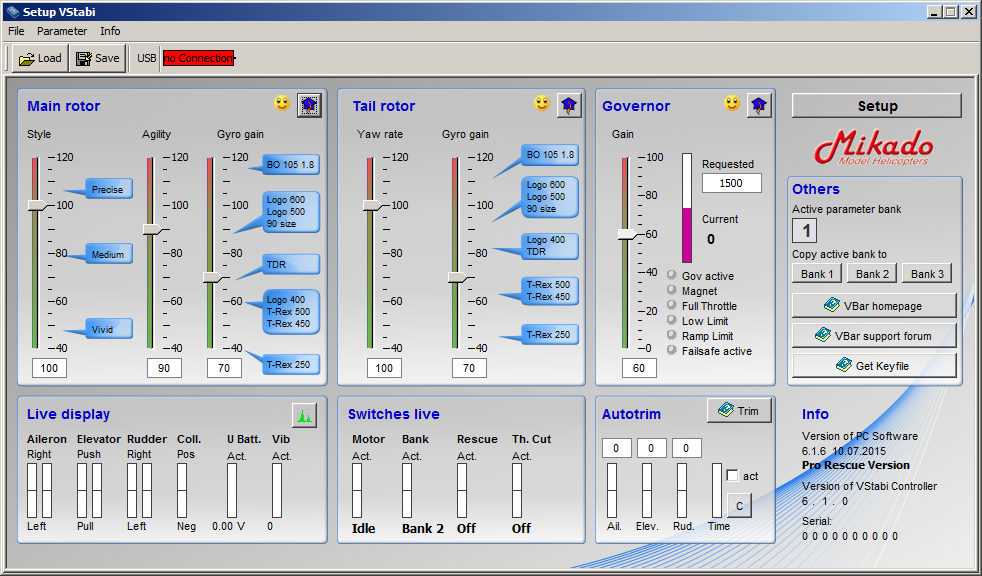 For us “old” VBar users a very familiar look and feel, where the old software had status-display of RX-voltage etc is now status for switches, obviously from the Mikado’s own transmitter. Those are now moved to Live Display-section of main window. The autotrim-section now shows the values also which is nice add-on. 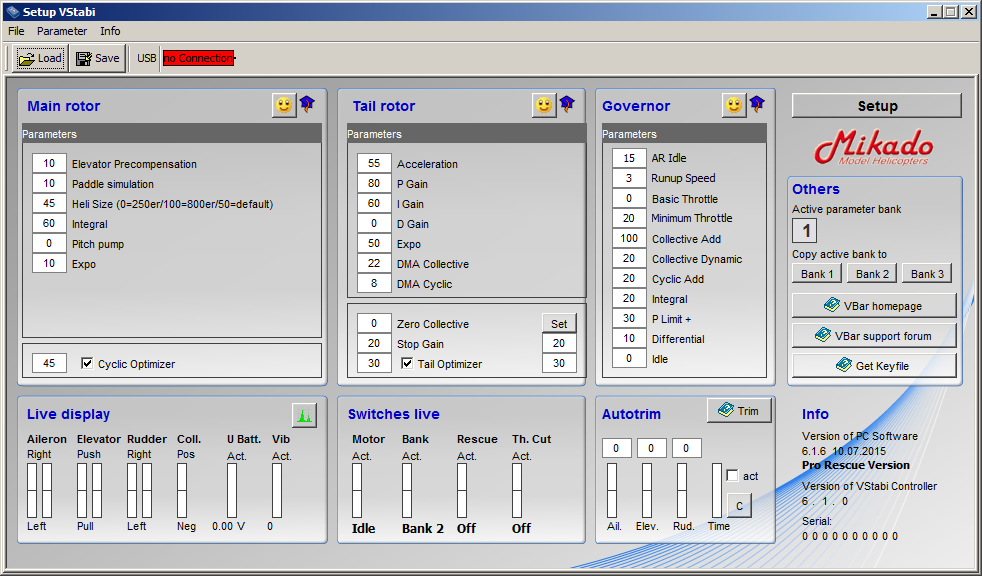 The Pro-functions have more changes at first look, on main rotor there’s now the pitch pump (it was on setup before), size value for heli and as new value the “Integral”. This is a “long term part of the loop which equalizes trim differences and keeps heli stable in one place.”

Governor-section now has 10 values compared to old 4. This is partly for the changed setup-screen, some functions have been moved from setup to here instead.

I’m pretty sure this gives a user great possibilities to adjust any heli exactly to one’s liking. And also to mess a lot of things up but there’s always the reset-button… No, wait, there isn’t anymore… Be sure to take backup or write down values before tinkering… 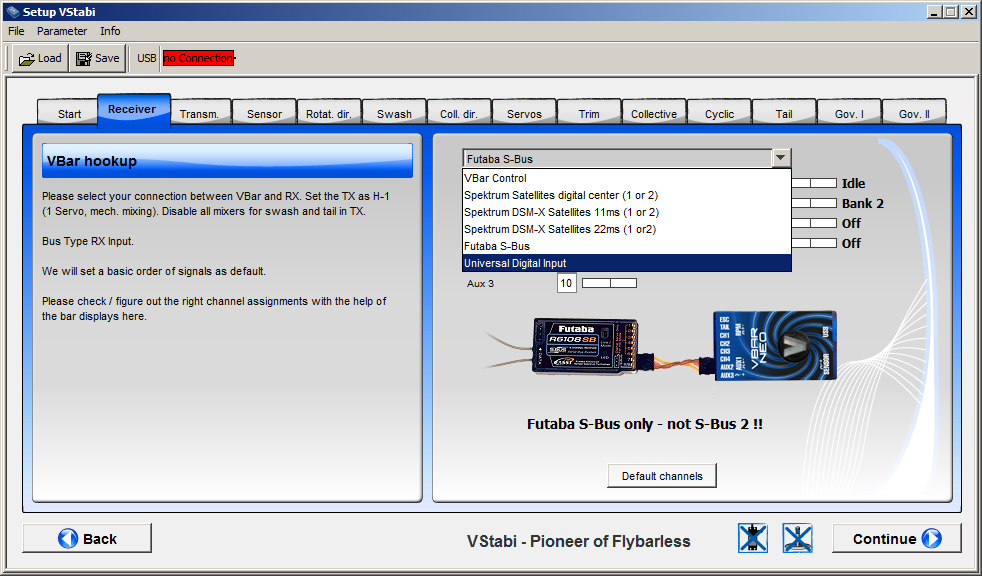 There is however one very important difference to take in consideration regarding inputs, there is no more a possibility to use a separate full-size receiver and connect the channels separately. Options are VBar control-receiver (of course), Spectrum satellites, Futaba S-Bus (No S-Bus 2!) and UDI (Universal Digital Input) for for example Jeti, Graupner, Multiplex etc. Also the channel amount NEO can/will use is now 9, this is at least partly due the tight integration to VBar Control radio. The traditional PPM signal is now also apparently discarded. 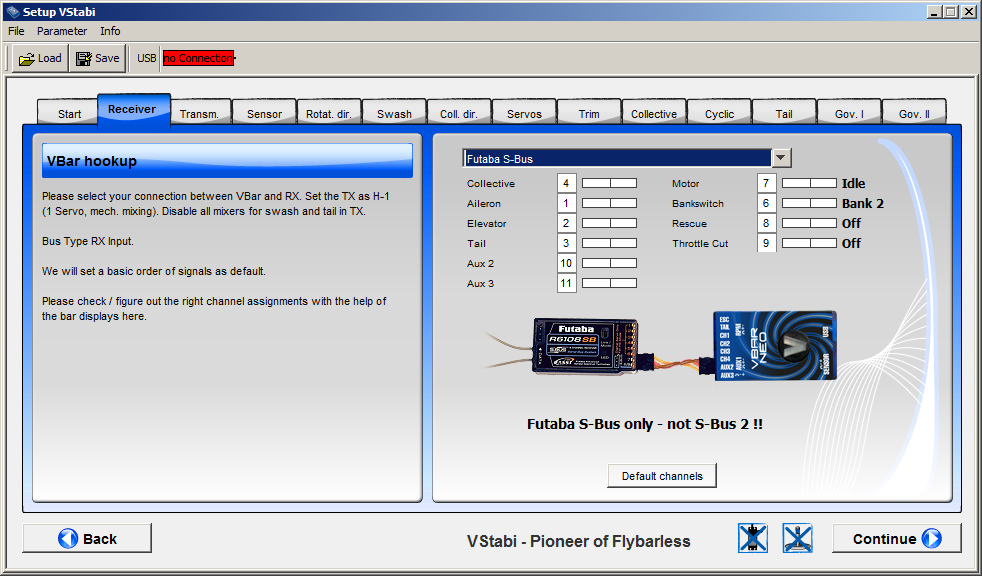 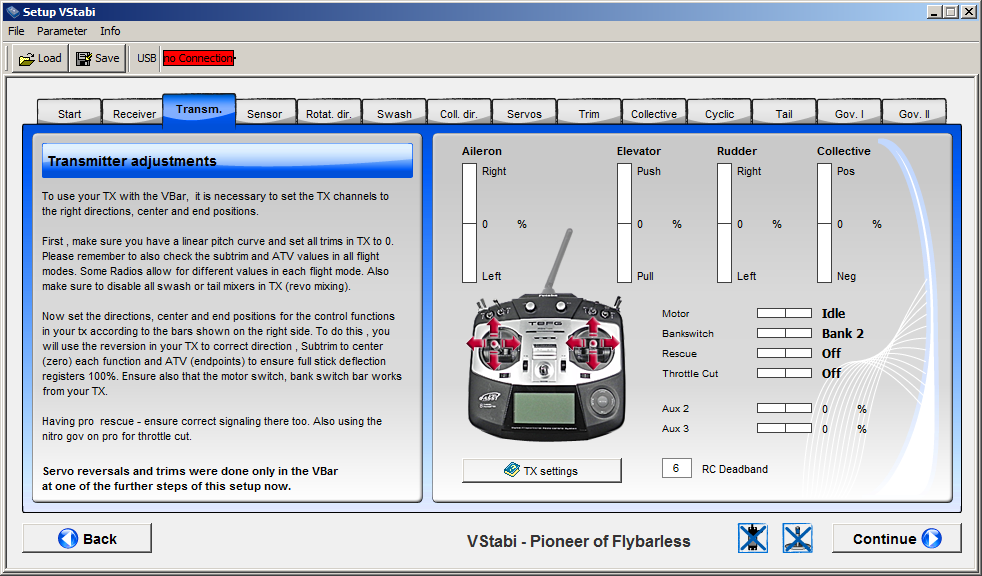 Since VBar now has nine output’s and is used via bus-operated receiver or satellites (Spectrum) there is more aux-channels that can be configured to anything from light’s retracts, smoke-bombs or what ever. This results in more channels on the channel assignment-screen and channel calibration-screen above. 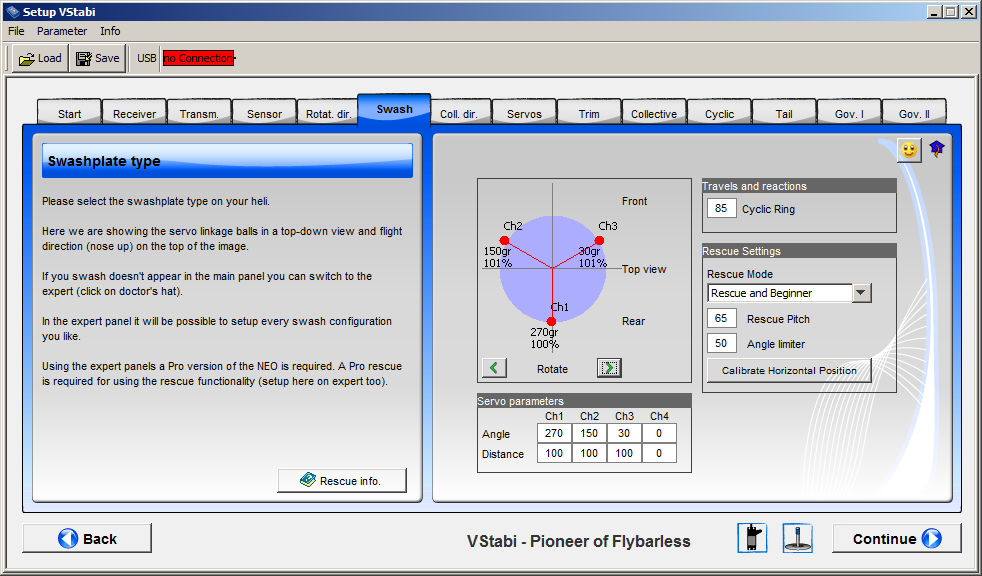 If you have the Pro Rescue license you have the possibility to enable rescue and/or beginner mode in setup. The Rescue and also the amount of pitch is set here. The “beginner” mode means it will limit tilt angle on aileron and elevator axis especially for hover-training. 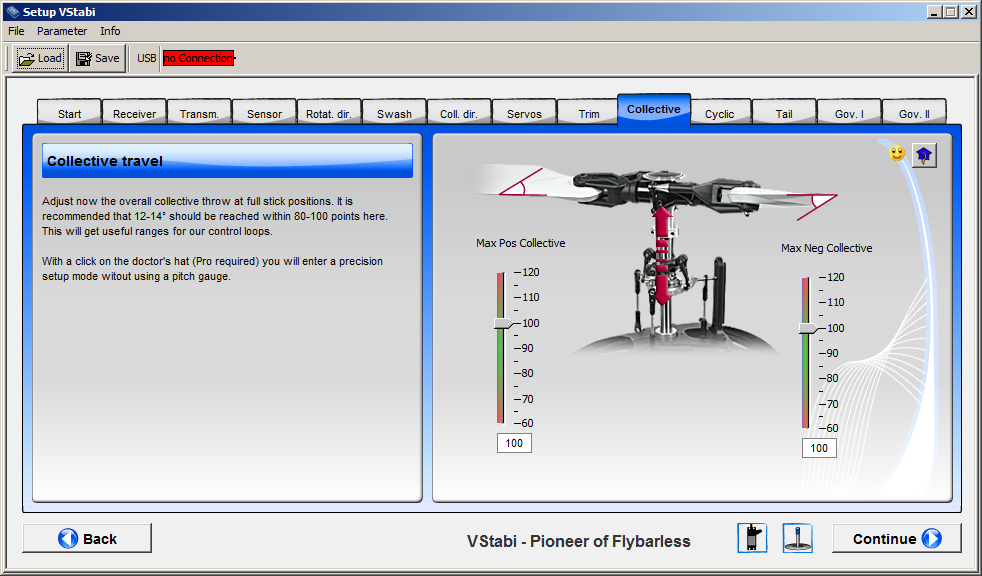 The collective setup-screen now has separate settings for max positive and max negative pitch. If you do your 3D-heli’s mechanical setup “perfect” you do not need this since swash-plate is dead-center but anyway a great add-on, especially for scale-birds where negative pitch is usually on lower value than positive. 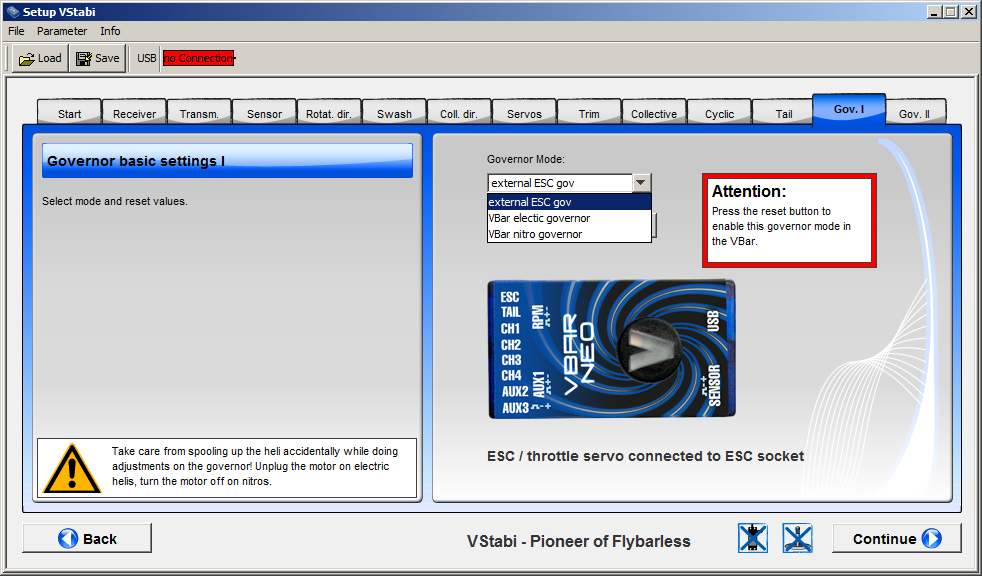 Governor has now 3 different basic setups compared to 4 in the old software, simplify’s setup actually. A lot of settings have been moved to main screen under the “doctor” compared to old software.

Well. In my opinion future looks bright for Mikado. The market demands a rescue-function these days, now they have it and what I’ve read it works. There’s always room for debate if it’s “cheating or not” but the same was discussed when tail gyros were introduced. “Only true men fly without gyro’s” have been replaced with “True three-dee-guys don’t approve rescue”. The value of rescue-function depends greatly also of flying-style, if you do full-pitch funnel’s one meter above ground you think of rescue long after the heli is in hundreds of pieces in the ground, half-way to china…

About china, only time will tell if (and how fast) this version of VBar will be copied to those K-Bar’s, Koala gyros and whatnot coming from china for a tenth of the price and pirated software. Mikado have done a hard work to make the copy-protection, unfortunately I’m not too hopeful for that to stick for a very long time. Of course I wish all the best luck to Mikado in this endeavour which it sadly is.

I’m sure I’ll try one unit out sooner or later, but just for the safe side it’ll be in the small bird first :)

For more information on VBar NEO go to Mikado website and to their tech-site VStabi.

As usual, if I have some error’s in my blabbering leave a comment or drop me a line though contact-page :)