Ever since RCT was founded traffic direction have been up. Sometimes a bit slower, sometimes a bit faster. The format of RCT as a website is a “hobby-stuff from a enthusiast to other enthusiasts” so in that aspect there will never be any millions visiting. Also the fact that RCT mainly concentrates on Jeti-stuff makes it a bit “small audience website”.

That said, RCT is doing great!

RCT is ran without ads and will stay without ads as long as I can make it to go around somehow. The cost of servers and traffic is paid from my pocket and is on a reasonable level at the moment. Anything is of course relative but still managable. You have also been great with the small donation button and I would like to take the opportunity to thank each and every one with big thanks for any donations, it really helps my coffee-addiction! Thank You all!

RCT Traffic in numbers for 2017

Trend is up! So nice to see that you are reading the site! Let’s have a small look how RCT Traffic have been developing through the years. 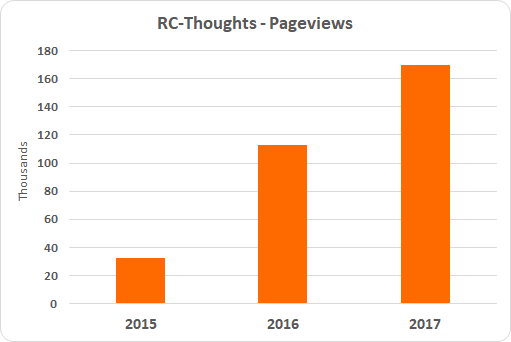 Looking at how many readers there is gives as some confirmation to increased traffic: 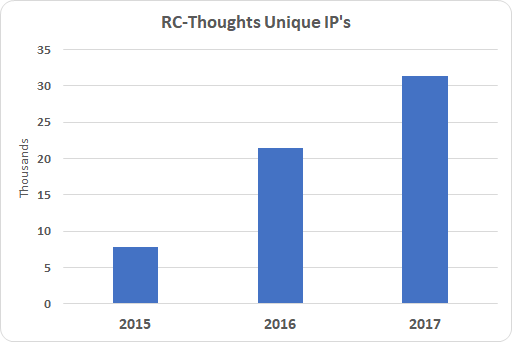 Putting all that together we can clearly state that there’s been an substantial increase in visitors and a lot of them read more than one page.

Looking a bit who you are and where you’rer from shows an interesting development compared to year 2016:

Some geek-stats is always fun to have:

Geek-stats reveal one interesting thing, a lot of you are reading RCT with a phone or tablet. The total operating-system percentage for mobile platform (Android & iOS) is 23.8% and that is quite a lot. Not one complaint or notification from users about mobile interface have been reported during whole year so that does make me believe the site works fine when seen with mobiles and tablets.

How long a reader stays on site is one interesting measurement. It is almost directly relative to question “Is the site interesting?” and “Is there something to read?”. Nielsen Norman Group states that average person leaves a site in less than one minute in average. You have been on RCT website in average of almost double, 1 minute 45 seconds. Again, a evidence that there indeed is something to read here.

Trying to understand the origin of increased traffic is a bit of a guessing-work but we have some solid clues too. First of all the DIY-sensors have been hugely popular as can be read from DIY-Sensor Survey. Also the simple fact that Jetimodel sells transmitters the whole time and older transmitters are being sold second-hand creating a larger user-base. This of course creates a larger reader-base for RCT if user know of the site.

Pretty much all “site-advertising” is done in few forums, mainly RCGroups.com and Jetiforum.de. These are the forums where information of new content is posted in various forms. In practice no other form of site-advertising is done so the new readers usually get the info on RCT existence either from mouth-to-mouth or from these forums.

Not really. It is of course very fun and satisfying to see the visitor-count grow but it really has no meaning to me. I do not get any profit of increased traffic so in the end it has no meaning in any but one sense. That one is the fact that I keep writing content since there’s people reading it! If for some reason visitor-count would go down to a thousand per year then most likely I would not do this anymore and RCT would either be closed or “left for wind”.

As you may know the site originally started as a place for me to write down the small tips & tricks for Jeti transmitter configuration. Currently it’s evolved to pretty much the whole ecosystem of Jetimodels products represented from a user-perspective. And I’m just happy to see that it can help others too!

The site and creating content takes a huge amount of time. As round figures site-maintenance takes a few hours every now and then, one DIY-sensor can take 5-30 hours of solid work before it’s in a shape to be released, a lua-app takes maybe 2-20 hours depending on the functions.

Making a quick average math for example on 12 sensors times ~15 hours gives us an average result of 180 hours. That is 22,5 full working days, all done in free time after day-job or on weekends. There’s also the reason why responses do not always come in 5 seconds. Then add lua-apps, other site-content etc. So yes, my evenings include a lot of RCT :)

It is with a feeling great gratitude I have been going through stats from 2017. And the people to thank for the progress and current situation is You, the readers. So my biggest thanks goes to all of you! You have been fantastic with ideas, request’s, tip’s and contacts during the whole year of 2017!