It’s been a few weeks since I asked all of you builders of DIY-sensors to ask a few questions about them. I got a really nice amount of answers too! What was really nice to see that according Surveymonkeys stats NONE of you stopped mid-way, all of you finished what you started, thank you a lot!

It was pretty much what I was was expecting but results are not without surprises :)

Question 1 – Have you built any of the DIY-sensors from RC-Thoughts? 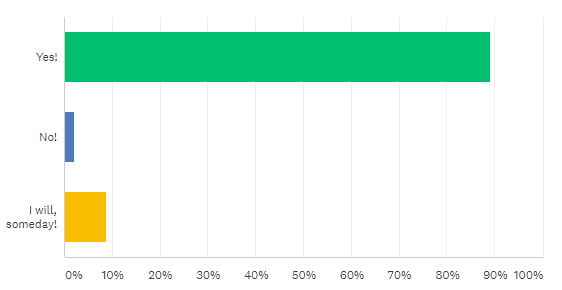 Now, for the actual stuff!

Question 2 – What sensors have you built? (Select all that apply)

This was one of the questions I really wanted to know. I have been wondering if there is any sensors not being built at all. I was happy, no, there isn’t, all of them have been built :) 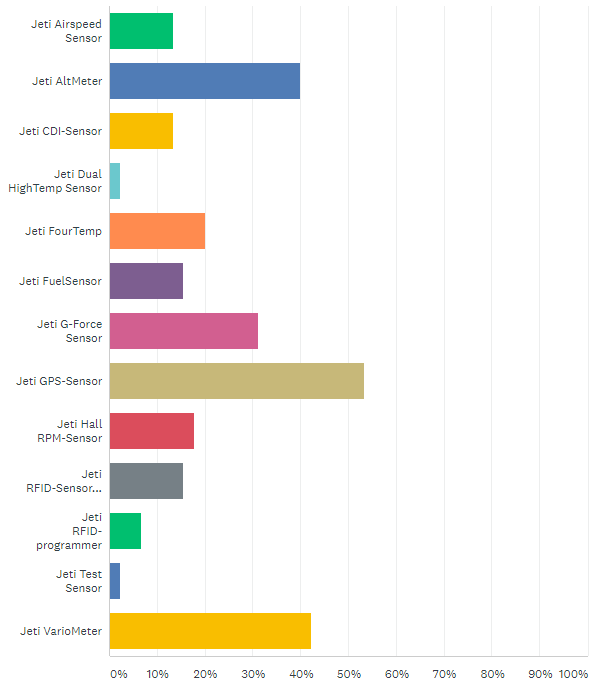 Looking at the bars in graphic we can spot the most built sensors straight away, that’s the GPS-sensor, without a doubt, over 53% of amswered builders have built it. AltMeter and VarioMeter are almost equal and the G-Force sensor is clearly next on the list. What we can see also in the list is that people do want to follow their temperatures, the FourTemp is quite much built, and also the Hall RPM-sensor is popular. The DIY Hall-sensor did come out before Jetimodel had their out. RFID-Sensor looks to be somewhat popular, there’s quite a lot of users of it since I also sold out the few batches I made of them. Quite a few have also made the programmer for it :)

So, what can we say? We can easily state that DIY is strong within Jeti-users!

Question 3 – Have you built more than one of any sensor? If so, how many at most?

I wanted to know if you guys are building one sensor or several. This tells me a bit if you are just testing or actually using them. And you sure are using them. Let’s look at the graph: 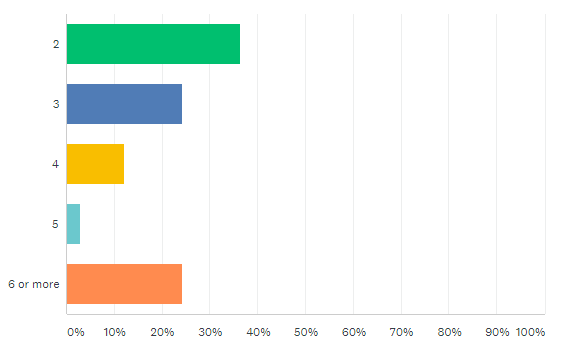 Question 4 – What do you use to upload firmware to DIY sensor?

Since I made a easy firmware upload app “RCT- Firmware Uploader” just before the survey was opened I wasn’t expecting it to be widely used but I still wanted to know the software you use to get firmware’s to Arduino. I needed to know this so I know what methods to support in the future. 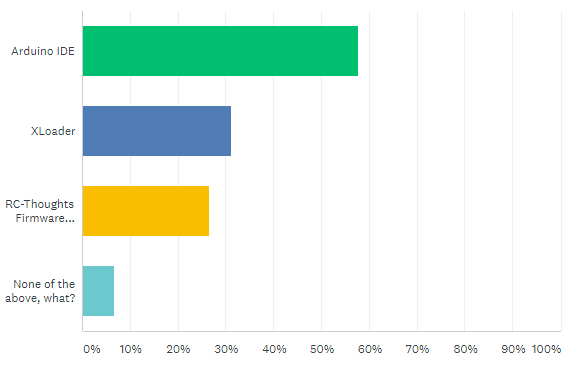 I was a little bit surprised, I had not expected Arduino IDE to take the most used app’s place with 58%. XLoader was second with 31% and my small app was third with 27%. Looks like I did not make the app in vain, nice :)

Here I had also a comment-section. As you can see there was also a option to answer “None of the above”. One of you had the most hilarious answer to question “What do you use to upload?”, this guy answered “A friend” :) There was also surprisingly many who are using avrdude from command-line which surprised me quite a lot.

Question 5 – Did you have any issues with building or uploading?

I was curious of any problems you had with either building the sensors or uploading firmware. Again, positive vibe, you guys know what you are doing pretty good: 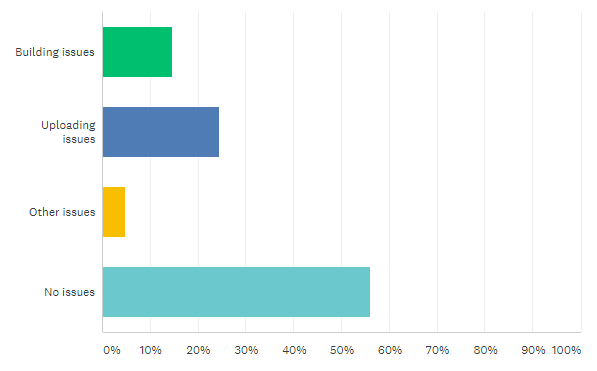 Looking at issues, 24% of you had uploading issues. Comments reveal that majority of them has to do with either faulty Arduino’s or learning the Arduino’s reset-buttons timing when uploading. So in reality that number does tell that those are issues not related to DIY-Sensors guides or software. What I was happy about is that 56% of builders did not have any issues. Comments did not reveal a lot of the reasons for the 14% of you with building issues apart from faulty china-components.

Question 6 – How would you rate the building instructions?

Since I make the sensor it’s always quite clear how to make it. Then I need to put in in pictures and instructions and it’s still quite clear to me. (Hopefully…) But I cannot say if you think so? So I asked if building instructions are good enough: 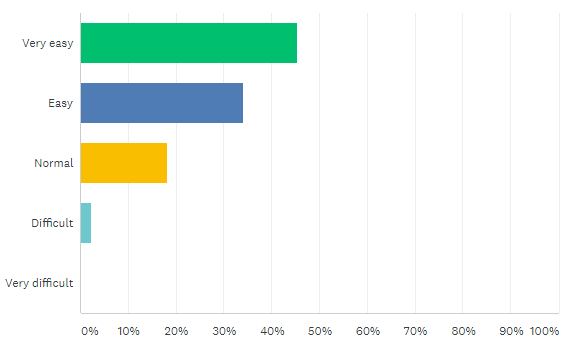 Results are satisfactory to say  the least, 79% of you are saying building instructions are easy or very easy. Excellent! 18% are saying they’re normal and 2% are saying they’re difficult. If I’m looking at support-emails I’m getting looks like there’s quite many taking their first steps with Arduino and soldering iron so that is of course understandable, we all need to start somewhere, right? What was again positive was that there was no answer to “Very difficult”.

Question 7 – How easy is reading schematics?

Since I have my own way of drawing the schematics I wanted to know what you think of them. Sometimes when drawing them I think they might be impossible to follow, gladly I was wrong: 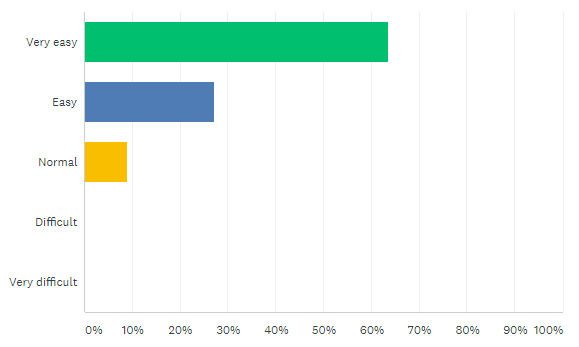 A whoppin 91% of you are saying schematics are easy or very easy to read! Rest of you, the remaining 9% are saying they’re normally readable. Again, very happy to state that no-one answered difficult or very difficult!

Question 8 – What sensors would you like to see as DIY?

This was a text-question, I wanted to know what ideas you have for possible new sensors. I fly mainly just heli’s so I don’t have a clear picture what you guys want. So let’s answer to some of the ideas you proposed:

There’s clearly two sensors you want most as DIY, they’re current-sensor (Jetimodel has MUI) and an expander. For the current-sensor wishes I have news, it’s in the works. If and when it’s out we don’t know yet. Current-measuring is relatively easy but getting the voltage is not if we wan’t to preserve the idea of “cheap and simple with so few external components as possible”. We’ll see what happens on that one.

Expander is another story. Let’s say we will make a 2-channel expander. That would require 3 serial ports from Arduino and the Pro Mini only has one hardware-port. The remaining two could be made with software-serial, in fact that would be the only way. I have been toying with the idea of several Pro Mini’s but it might get too bulky. Anyway, the code part is the one keeping me out of this, I simply do not have skills to make the Arduino to use 3 serial ports and buffer / time the bi-directional traffic to receiver. Mayne someday but not in the very near future at least from me, sorry for that.

A few of you wanted multisensors. I have sayd before that I will not be taking that path with my simple sensors. I will continue to use the philosophy of “simple to build and affordable DIY-sensors with as few components as possible”. If you wan’t to make multisensors you could have a look on the brilliant OpenXsensor that supports multiple sensor-modules.

Question 9 – Does any of DIY sensors have a feature missing? What?

I do get quite a lot of really good feedback from the DIY-sensors. But since we users are somewhat shy or lazy to shout out improvement-ideas I asked if you are missing any features on any sensors. I was kinda disappointed, you seem to be very happy :)

That does not mean there was no answers, there was a idea of min/max-storage of values. Usually our transmitter does that so I’m assuming you are one of the Jetibox users. Unfortunately you did not say the sensor where you want it.

There was also few wishes for daisy-chaining sensors, unfortunately the earlier expander-reply applies here too.

Question 10 – Anything you would like to add? Word is free!

Last box in all surveys just has to be a “Word is free”-box. So, let’s take a few examples from the answers:

“The xLoader could be improved so one can clearly see he has the right .hex file“

Nope, not by me. XLoader is not my software and I’m not sure it’s maintained anymore. Original authors page is here, please contact him. Just to do a shameless advertising, my RCT-Firmware Uploader does that :)

Of course they’re free to build! That is the spirit of DIY! To be a bit egoistic, I make these at least us much for myself, I like to tinker with things and if the result is something someone else could enjoy then of course it’s shared :)

Why? I really would like to hear the reason? You can make this yourself too if you are using Arduino IDE. Search for the pin-definition and change it. Be sure to use a compatible pin.

It just has to be this:

“Id like to thank you for all the work you do ,im a big fan of your website and you’ve improved my jeti experience”

If i have in some little way been able to increase your hobby-experience then I’m very, very happy to hear that. That really makes me so glad and humble! It is answers like this that make all this writing, tinkering and testing worth all of this!

Thank you very much!

One thought on “DIY-Sensor Survey – Results”