RC-Jets been flying all week their practicing flights for the competition, and now the time for practice is over. Today was the official opening day with a flight-show with all bells and whistles. RC-Jet competition flights and static judging begins tomorrow so now it’s really on!

As usual in an event of this magnitude there’s gotta be a show, right? Program was very well put with presentation of different RC-genre’s beginning from throw-planes, DLG’s, F3<insert letter here>, RC-Heli’s, scale gas-planes and of course a RC-Jet.

I was meant to be presenting RC-heli with a flight-show in my (only way I can) big air-style with a smoke-cartridge. Unfortunately something happened with my Logo 800, I lost nearly all power. I landed with about 400rpm when my idle up 2 flight mode is requesting 1880rpm. No sure yet what happened but that’s another story.

Thankfully we were doing a dual-flight with Sami who did some 3D-style so public did get a true pic of what a RC-Heli can do.

Proud presenters of a fun hobby (Sami on the left, me on the right): 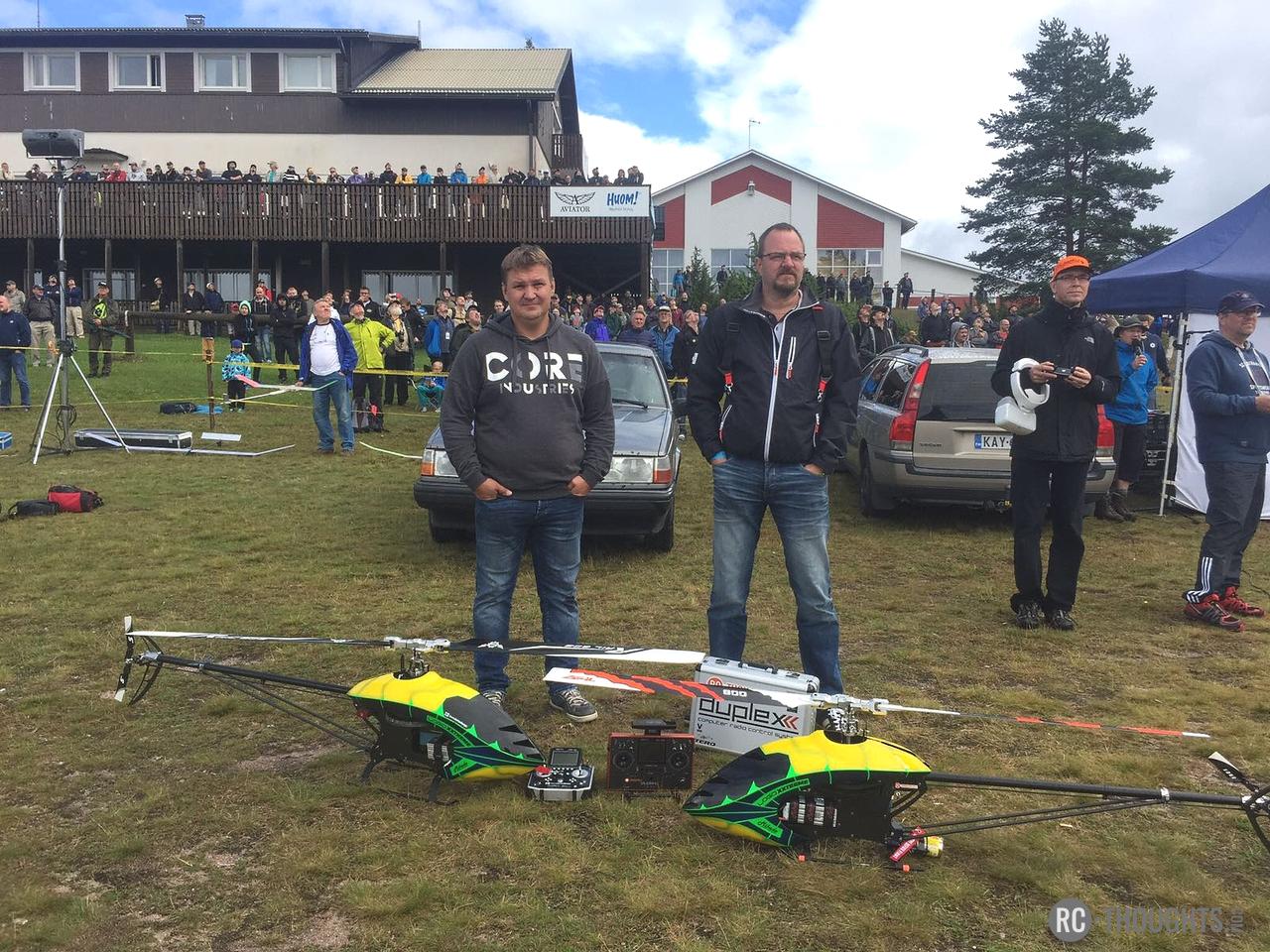 Since I was participating in the RC-genre presentation unfortunately no pics on those for my part. Now, let’s get to the main ceremonies.

As we know event is under International Jet Model Committee, IJMC. And since this is a world championship-competition there needs to be a speech, so here’s the chairman of IJMC, Marc Froehn:

One really nice touch was parachuters with two flags, one was carrying IJMC-flag: 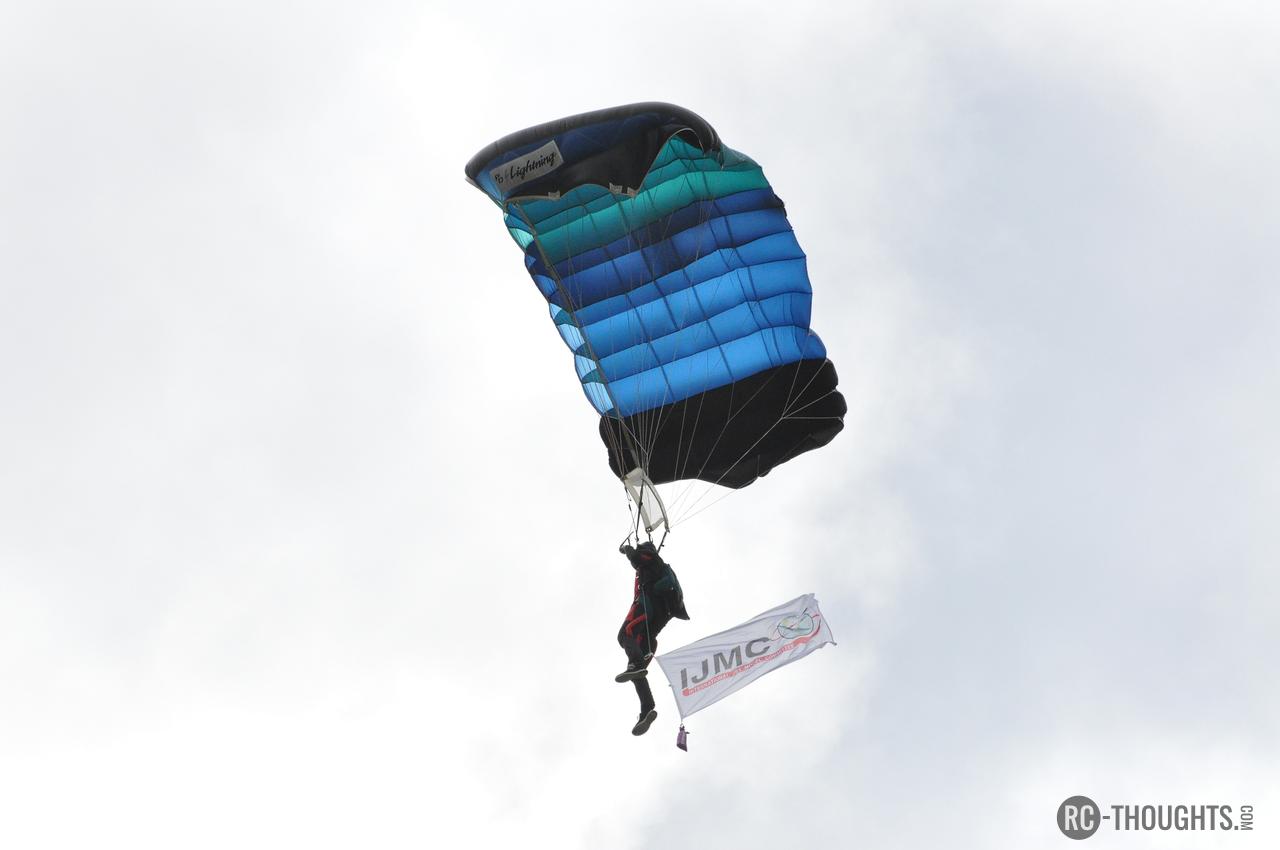 And the other was Finlands flag. Really nice to see this with a matching color parachute especially since this year we celebrate Finland becoming 100 years:

All the teams of course marched to the field and all the participating countries were presented along their team-leaders. Here’s Team Finland: 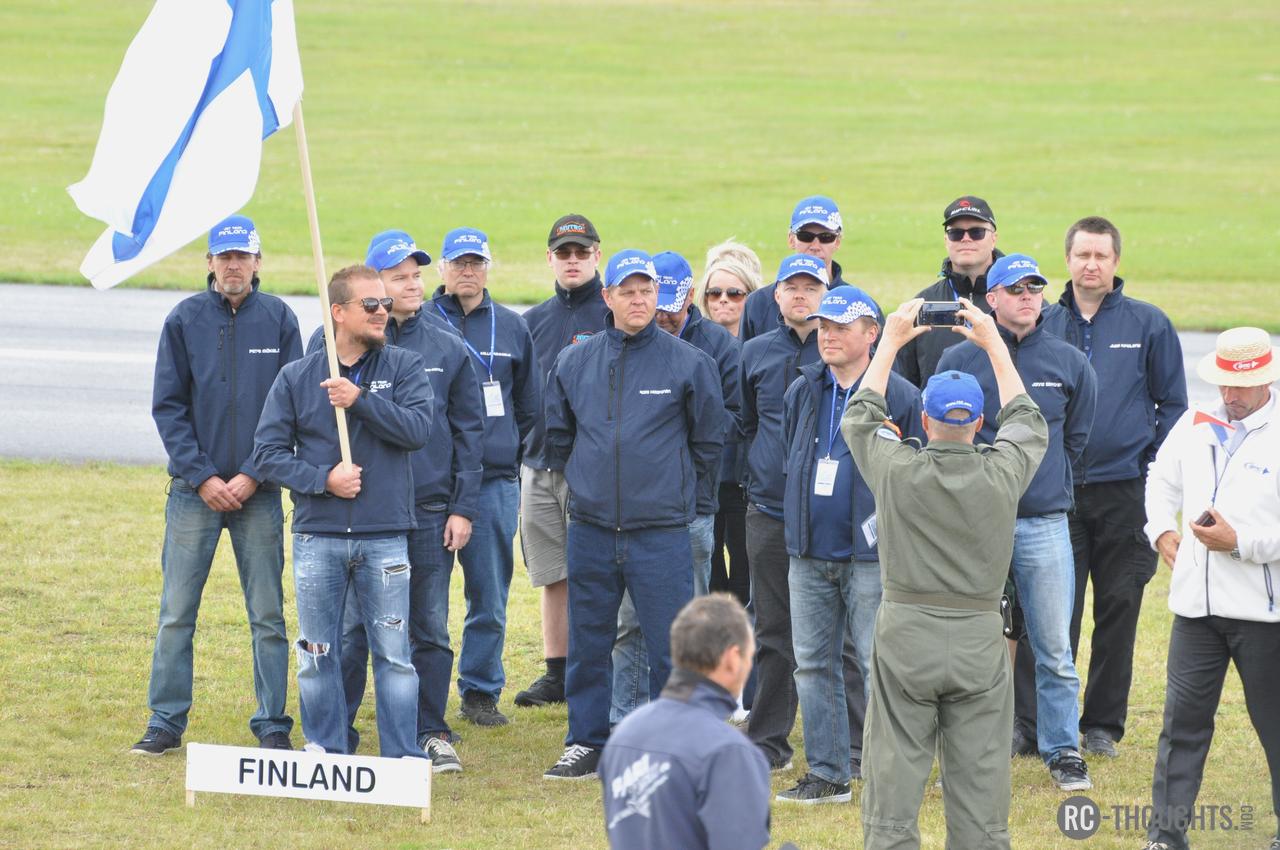 Now. Let’s get to main stuff.

There were a 1:1 flight show, and that alone would have been worth to get one’s butt to Jämijärvi. First of all, to see a SAAB AJS-37 Viggen in air is a not-every-day thing. And the sound. Seriously. I could listen to that all day. That thing doing a horisontal wide turn with afterburner…

And when do you have the opportunity to take a pic like this yourself:

Not that that was the only interesting thing there today. One unexpected thing to see in a flight show was a Embraer Phenom 100 from Finnish Aviation Academy. Not only is it really beautiful plane:

But how often do you see them flying like this: 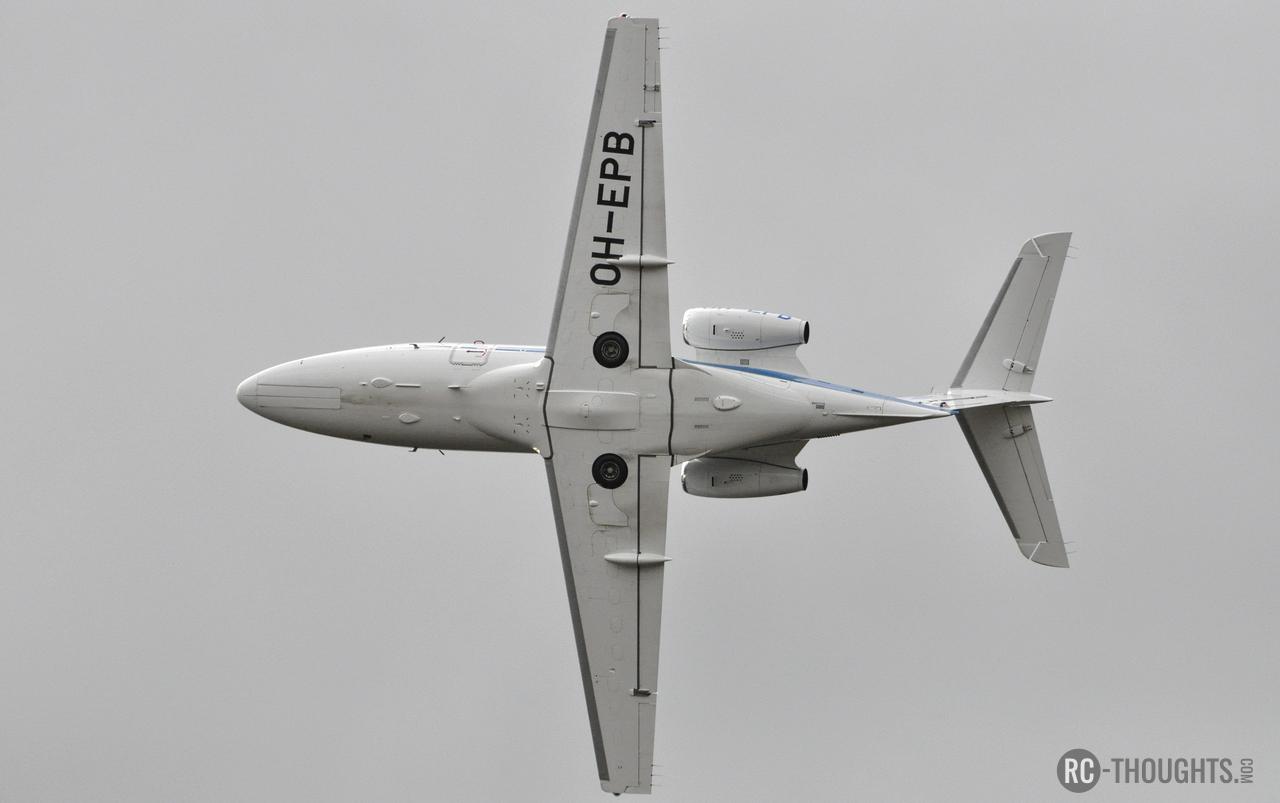 Ok, Time for the big boys.

Midnight Hawks is a flight show team from Finnish Air Force flying BAe Hawk Mk 51’s. Among other things they’re also internationally known for their very tight diamond-pattern where wingtips are very close to each other. 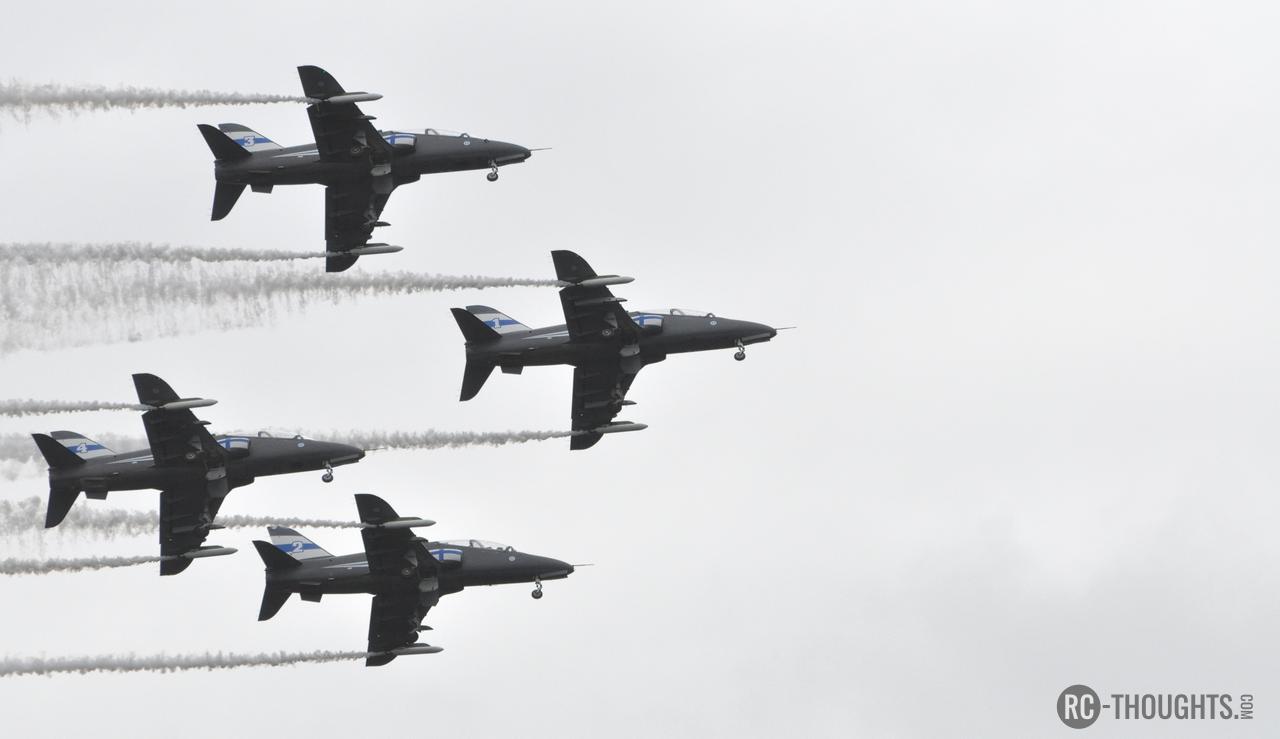 One downside to the damp weather and all the time changing backdrop (clouds one second, black clouds the next) it was hard to get good pictures. That did not matter so much with Midnight Hawks, the flying they did was so consisting and all the levels were really precise so taking some pics was relatively easy even for an amateur like myself:

Oh yeah, I said they were tight, didn’t I?

The weather was changing quite fast all the time so during the show there were a few windows where one could take some pics like this too: 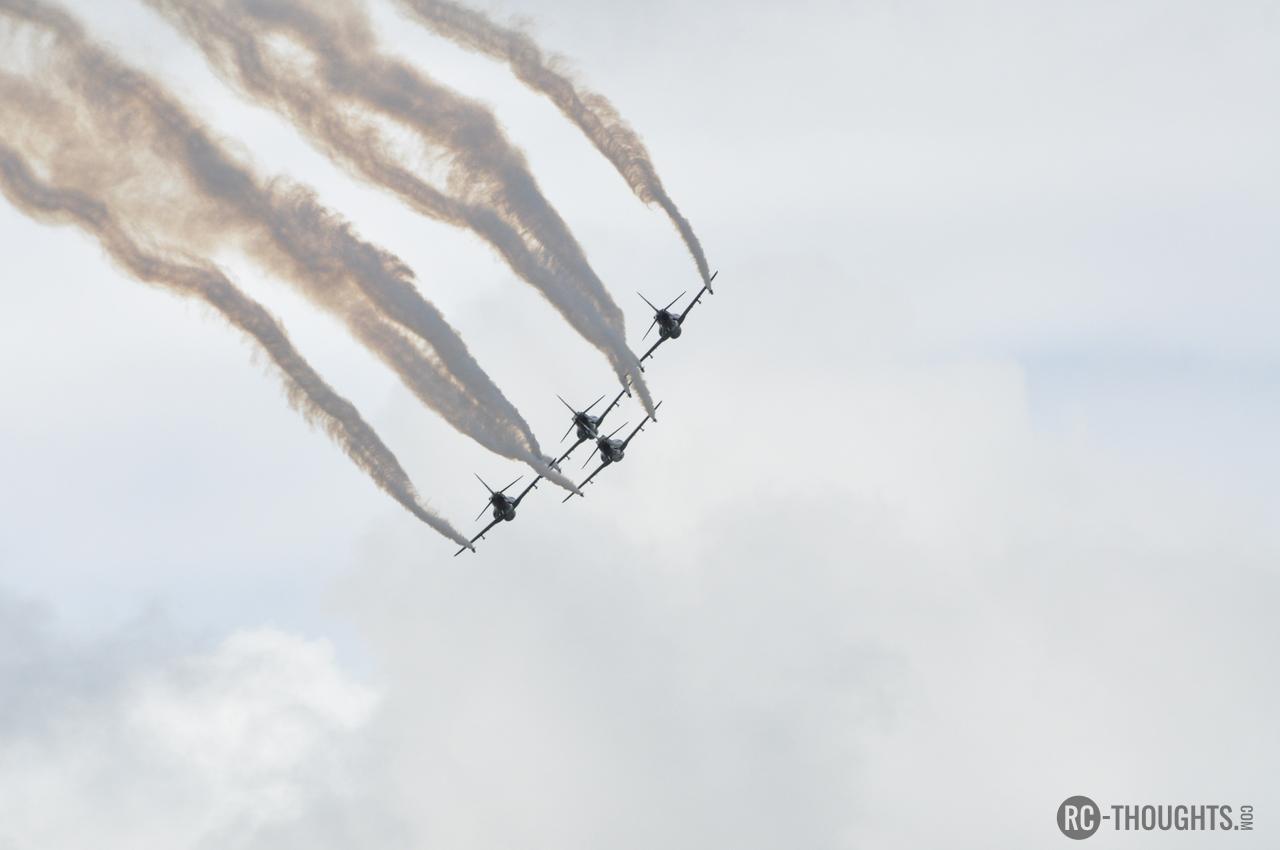 This was actually first time for me to see Midnight Hawks live. Too bad cloud-base was so low they could not do the normal routine but had to do the low cloud-routine. Nevertheless, Midnight Hawks was something I really enjoyed watching. After the group-show was finished we had the opportunity to enjoy a solo flight of one of the Hawks, needless to say that was beautiful.

Program would have included a plane I really wanted to see in the air, Fouga CM-170 Magister  but due weather it was not possible. Since Fouga would have to been flown VFR and weather did not permit that we sadly was not going to see the Fouga. But these things happen, that’s just the way it is.

To talk about a BIG RC would be an understatement when we are talking about this one. Flown by French factory-pilot Philippe Gey, a 38kg, 7 meters wingspan RC scale-glider with 175N turbine and smoke-cartridges.  Talk about a show!

And if we were expecting a “glider-like” flight we were wrong. Absolutely fantastic flight with good music on the background!

That thing is majestic in the air. Anything under that word is an understatement. 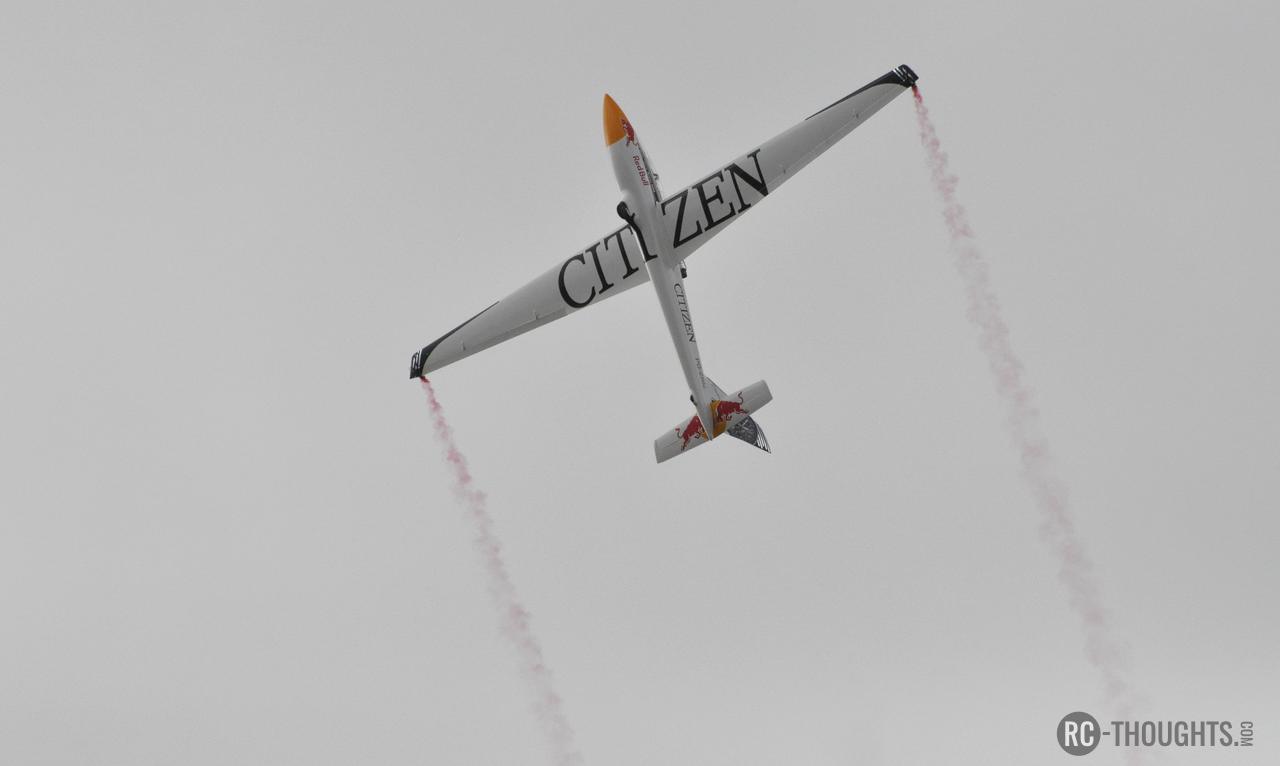 Every now and then one see’s a model that wakes up the “I want that!”-feelings. Paritech Fox really was one!

I know the photo’s aren’t the best available, bad weather and a loaner camera (Thanks Kari!)makes things a bit lottery sometime. I’ll be visiting Jämi under next week looking at some competition flights so there is a good possibility for more pics sometime!

Now, go out yourself and fly/drive/sail something yourself!