After Jeti Studio got released there’s been postings on forums and confusion on what devices can be updated. So, I took my quest to find out.

Jeti Studio is released for Windows, Linux and Mac OS, get yours here.

Where did I get the info?

The way Jeti Studio works is that it goes to Jetimodel website and check for available updates. I looked what it goes after and it turned out to be a SQLite database, and simply read that information. Pretty easy actually.

Finally, here’s a definite list of devices that Jeti Studio can update (List is based on information 15. october 2016)

With all different language-versions there’s in total 223 update-files available at the moment. Everything in one place and without any extra downloads. Gotta admit, this is made very easy to us users. Kudos to Jetimodel :)

Just for the fun of it I tested if some devices can be updated. So I started Jeti Studio and updated following devices:

Updates themselves were totally ok. One thing I did notice was that most often the updater did not recognize a new device after one was updated. This minor thing is quickly resolved by closing updater and then re-opening it.

ALWAYS make sure to check settings and function after updating anything. You do know that, don’t you?

Now, go out and fly something :) 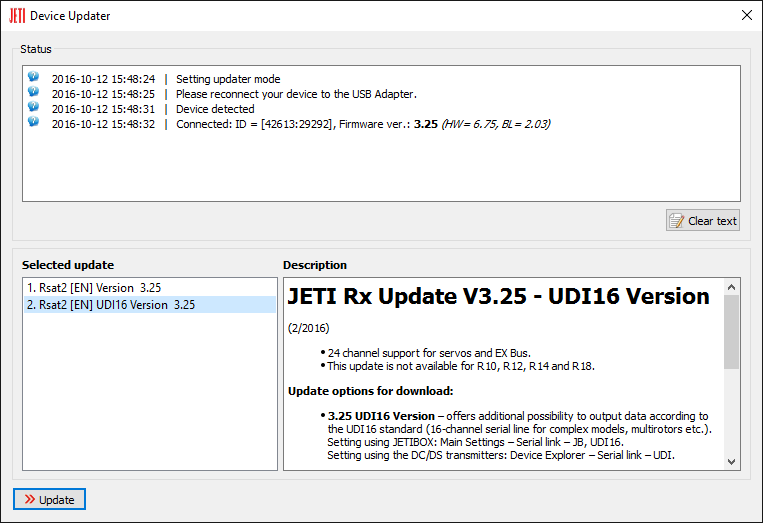