I got an email about this thing. Dude, those Norwegians are crazy. But hey, someone want’s something, we’ll fix it! (Despite color-pictures this works on 14/16/24 transmitters.)

Flight Mode on a timer

At first I thought that this would take two minutes and I was so wrong. I almost got cought in one small issue but more on that later.

How to achieve a Flight mode active for 5 seconds only 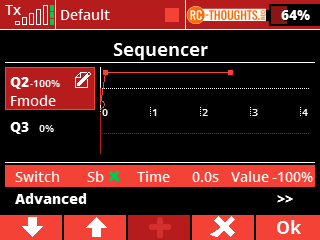 So, make another point on timeline, this time on 2.6 seconds, and once again value is positive 100%.

To be mathematical it would be:  SequencerLastTime is DesiredTime divided by two and added with 0.1.

Dude. My second-grade math-teacher would be so proud right now! So, adjust time after your needs.

All right, get on the advanced settings: 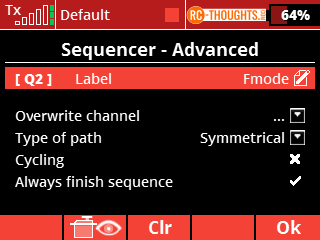 Make settings according above. Symmetrical, no cycling and always finish sequence. Give a name also so you know later on what you are doing.

Hang on, a small issue here…

One would think that “we have a sequencer as a switch, let’s assign that sequencer to flight-mode selection”. In theory yes, in practice not so much. For reasons beyond me sequencer cannot be used in flight mode selection so we need to be creative… 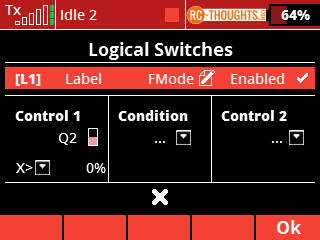 We need only one input on this logical switch, so no need to think of any “AND”, “OR” or anything. Make sure you select the sequencer as in picture below, that is centralized and proportional: 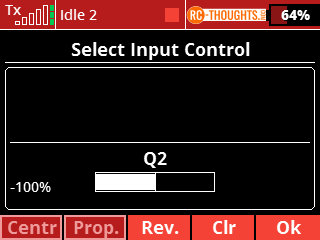 So, now we are in business.

Finally we are in the flight modes! Check out the picture below: 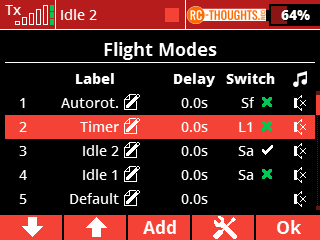 As you can see I have now 5 flight modes. If I’m on any lower three flight modes (Default, Idle 1 or Idle 2) and use my momentary switch I will be in flight mode “Timer” for 5 seconds and then return to the flight mode that was active before.

Note that in my example flight mode “Autorotation” is overriding everything. If this would be my real heli I would have “Hold” on top.

I really do not know. Ask those Norwegians, they wanted it! I’m just as curious as you!

One thought on “Flight Mode on a Timer?”