I have to take the opportunity and thank mr. Jakub Mitura from Jetimodel S.R.O, without you I would not have this piece of marvelous engineering here! Thank you!

Christmas in the summer

After following Fedex tracking the package arrived, and right away had to jump in the car and collect the shipment. 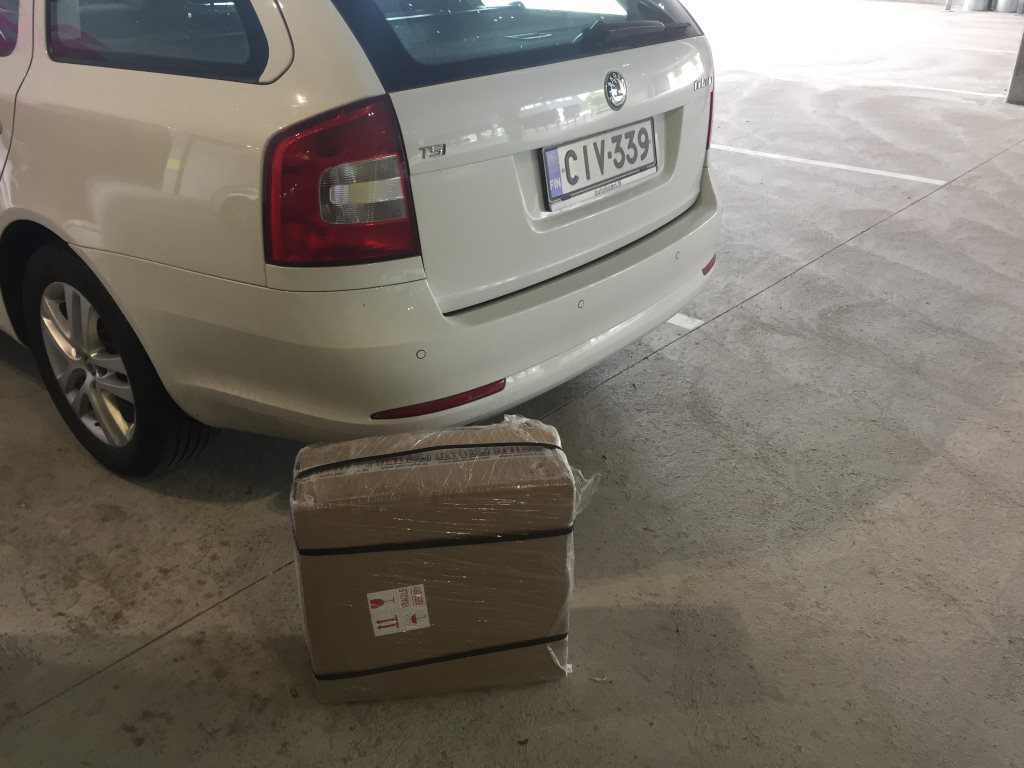 Gotta say Jetimodel does a great job in packing, Fedex would need to drive over it with a train to make any harm…

What did I get?

Contents of shipment is what one would expect: 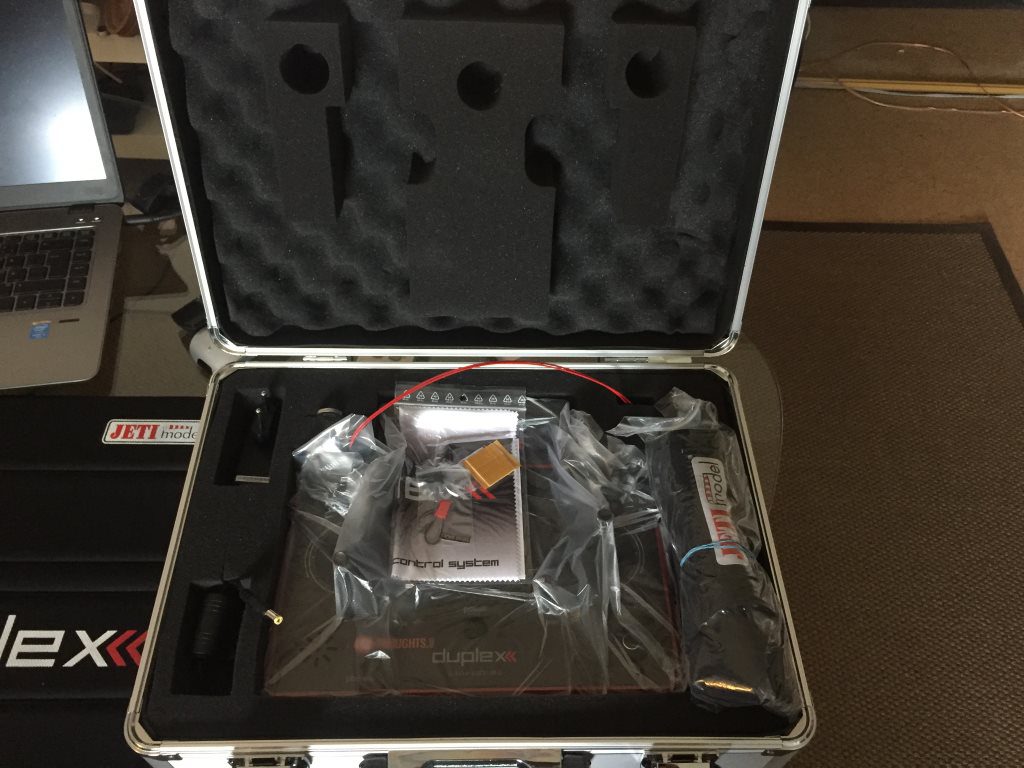 What is noteworthy is that the brackets for transmitter are not included, this was not an issue since I had a pair of them at home already.

And the main thing is what we are used to with Jetimodel, a great piece of engineering: 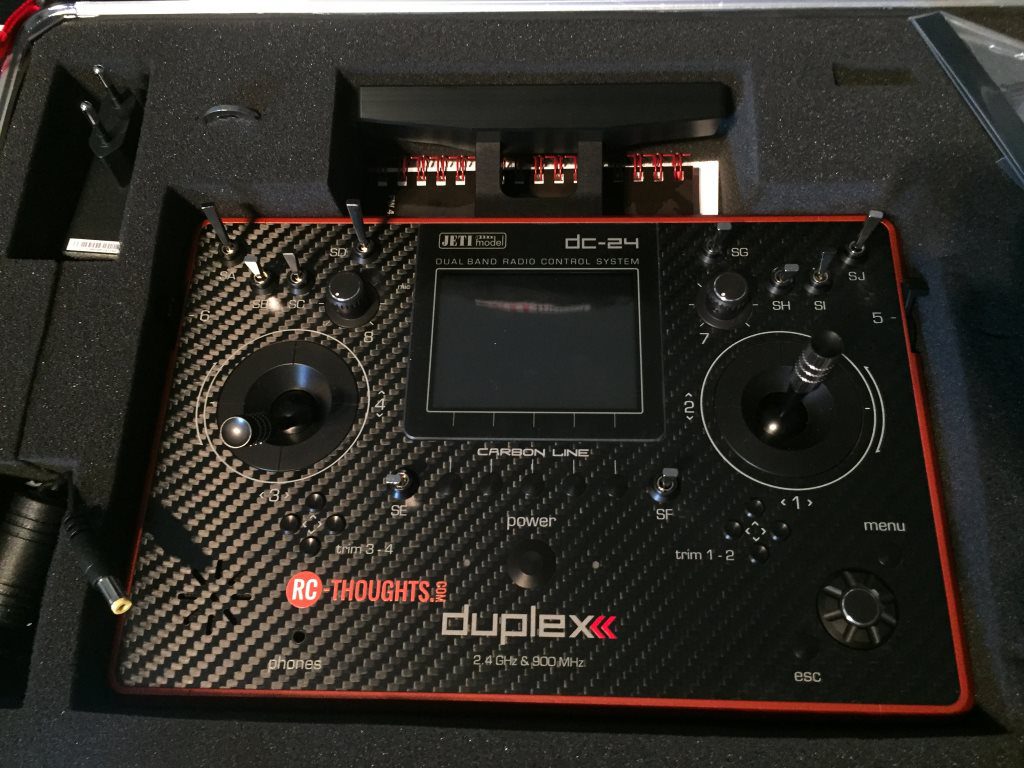 Cool little print on it too :)

The inner parts are as impressive as we are used to with Jeti: 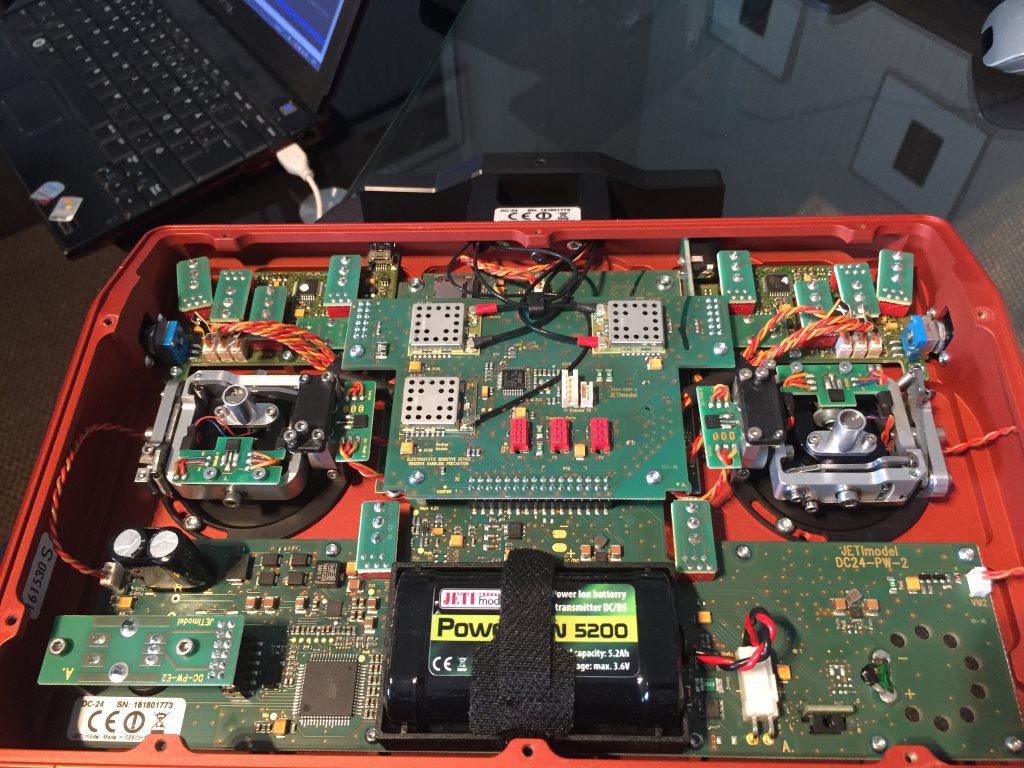 These little red thingies look very interesting, one can only wonder what is coming that would take benefit of expansion ports: 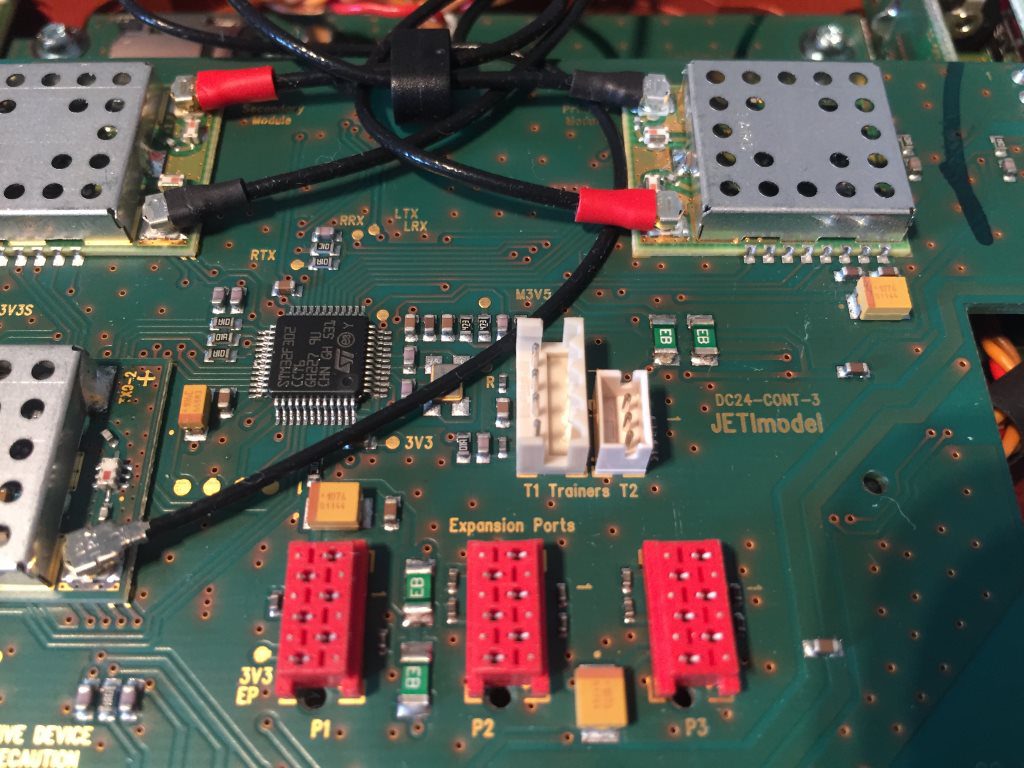 Like always, open the unit and adjust sticks. DC-24 has the multimode gimbals and that means both gimbals are the same. I like the touch of those, but this was completely not without issues.

First of all, the earlier talked issue with throttle-smoothness if ratchet is not used is not totally gone. It is remarkably better than with old gimbals but not totally gone. I have to admit right away, most of us would not notice this at all but I like my throttle VERY loose and there is a very slight tension difference around mid-stick. It is small, but it’s there. This might however change after some usage, we’ll see. 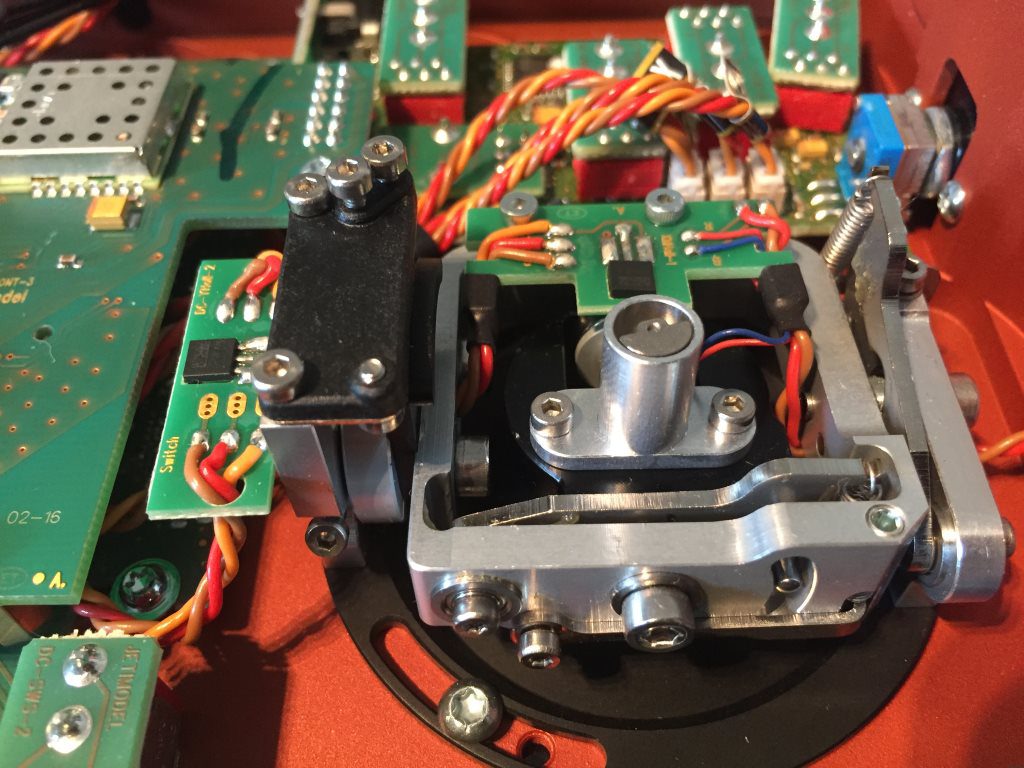 The new thing is the vibrator-motor in the gimbal, in the end of the stick itself. It’s defaulted to “Low” vibration power, I tried “High” and cannot see why I would use it, it was pretty violent. This is selectable for left and right.

For example for alarms you can assign to left or right the following patterns:

One thing I noticed on the gimbal is that the tension adjusting bar does not go all the way to bottom: 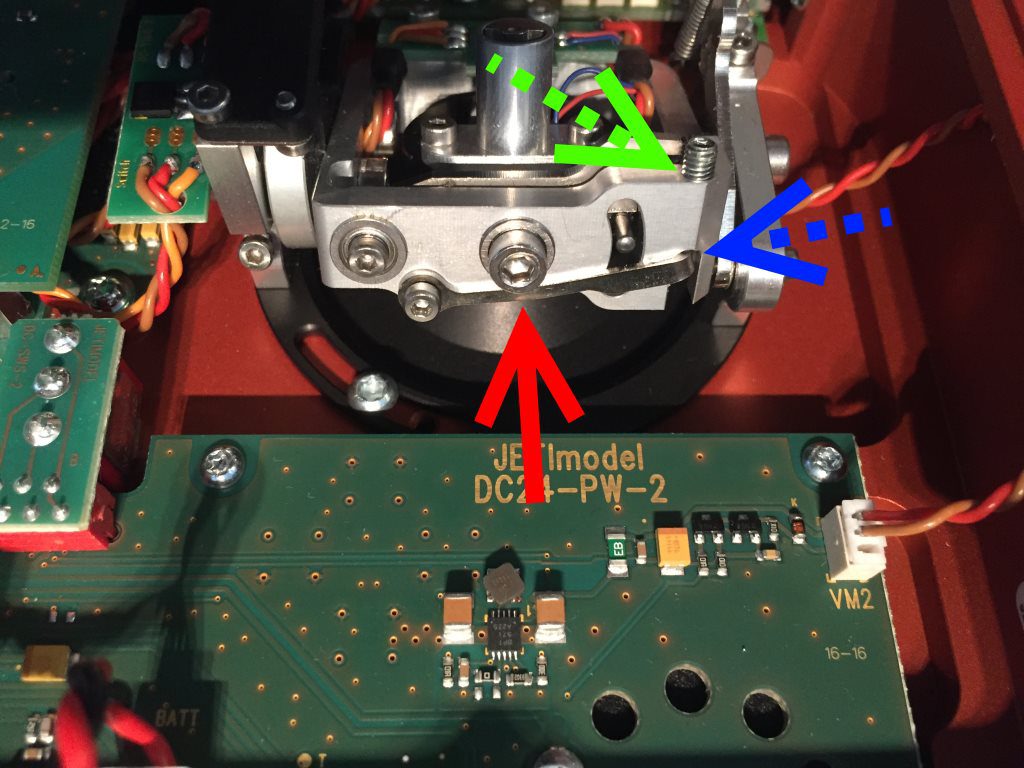 If I unscrew the setting screw all the way up (green arrow) the tension bracket does not go up all the way (blue arrow) unless I bend it just a bit at the point where it collides (red arrow). This is a very minor issue, like I said, I like my stick very loose.

Compared to DS-series changing the switches was a pure joy. Switches are with connectors in DC-radio, not with the annoying flat cable. I had to move practically every switch to get it like I want it and it took me just a few minutes.

Well. It’s been widely talked in teh interwebs. New color screen for Jeti. Of course I played with all the possibilities and quickly found out that there is only one that a) fits the overall color of transmitter and b) is easily readable. So, I went with dark red: 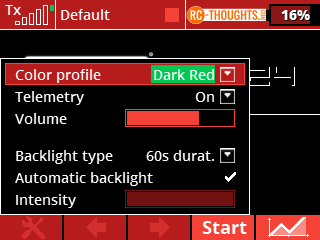 This looks hideous in the preview-screen but is really nice in real life. 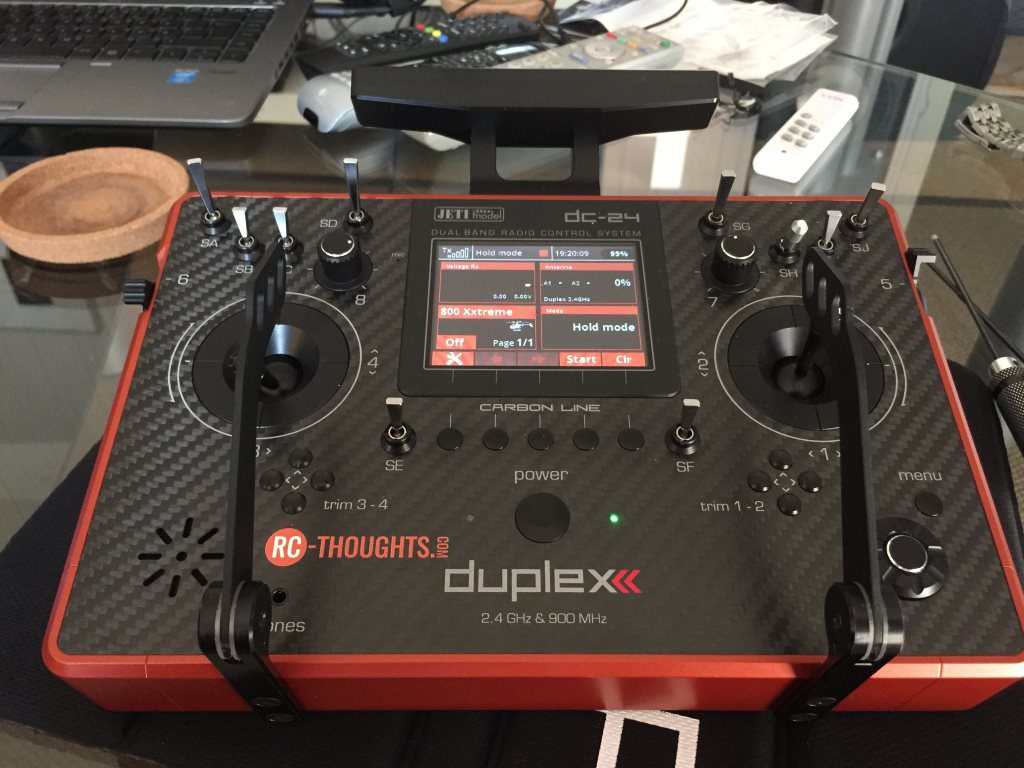 I was hoping for a configuration file somewhere deep in the SD-card to make your own colors but this was not meant to be, at least not yet. Jeti, are you listening? :)

Anyway, here’s all the available colors in one annoyingly blinking gif:

We now have the possibility to use image for the model and also to have a background image with selectable transparency.

Perhaps the most convenient way is to have an image and use it on screen as a “box”: 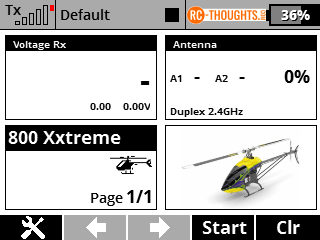 To use the same image as background works too: 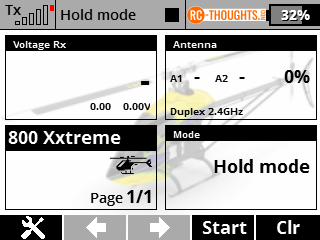 In my eyes this does make the screen a bit messy, but some will like and use this. There is something I used. Since I like the carbon pattern I used it as a background, unfortunately screenshot does not do it justice: 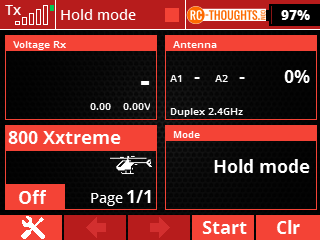 And yes, both color scheme and model- & background images are set per model. So if you want to match the models color-scheme to transmitter screen you can. Very nice detail ;)

I already covered the most of what’s new earlier here, so no need to list all differences in amount of this and that programmable features. Some things needs to be said tho.

Inactivity alarm, somewhat waited feature is here. Setting is somewhat surprisingly in “System” -> “System Sound” where both the audio-file used and timer is set. Time is adjustable between 0 to 60 minutes.

Icons in menus, this is very nice indeed. In my opinion makes menus way easier to read. Here’s some examples: 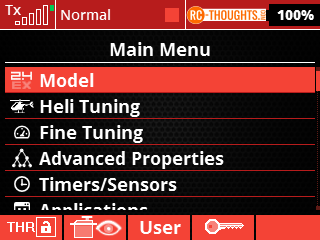 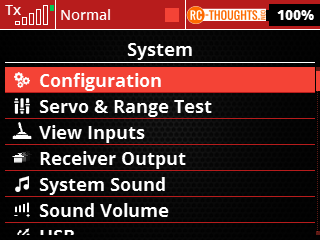 Radio worked as it should, needs the antenna to be plugged in. Radio also get the RDS text as can be seen when listening to Radio Rock: 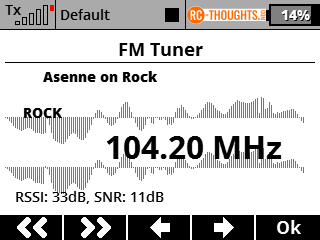 When exiting radio screen transmitter asks if you wanna leave the radio on playing to the background or not. Nice.

There are small tweaks here and there, I like the readability, fonts, sizes etc. There really is not that much I’d hope for.

Everything new is not covered here so more will follow in some sort or form.

I need to set up my simulator, coming from DS-series DC might need some time to get used to. However I’m really surprised how great it is to hold as DS, no issues with reaching to sticks etc. I also find the switches sort of more accessible compared to DS. We’ll see what happens. I know the DS-24 is also coming… :D

And the thing I personally have waited for, it’s LUA-time! Finally!

I’m truly a test-person for LUA since I know practically nothing about it so this should be fun, good thing is that I’m on vacation :)

Now when DC-24 is released the LUA API documentation should arrive to Jetimodel website any day (I hope), I have the pre-release doc so at least I have something to go on :)