It really have been a few weeks of busy times tinkering with all kind of stuff before season starts. Here is some progress-info on the speed measurement-system Sleipnir I’m bulding.

Well, it’s “software-finished”. Everything is tested. I did have some issues with lag most likely due the first laptop being Core2Duo 3Ghz 8Gb machine. Looked like it simply was not enough . I then took a i5 + 8Gb machine and installed debian jessie (yeah, I’m conservative…) and began testing. Looks really good.

Hardware is a bit of a concern at the moment. Still waiting for DC-DC stepdowns and tripods for pods. Nothing to do there but wait. Due time-issues I’m ditching the PoE-powering of pods and at least in the beginning they will powered with 6S 5000mAh LiPo’s via DC-DC stepdown.

So overall, it is confirmed that setup will be running on first event when it need’s to.

It has not been totally problem-free journey. After dealing with obviously too weak hardware the software did tease me a bit too. Testing of setup proved to be really difficult due the movement-trackin algorithms but I finally found the correct way to move my finger in the camera-field when pod-raspberries were on the table. Now I can test with great precision.

One issue remains, for some reason Sleipnir eats up all the available memory if ran for ~45 minutes straight. I have not found a reason to this, also Linus (the developer) has no idea why, he is not suffering from this. It has nothing to do with power since CPU-usage is on low 40’s on all four cores. TO be honest, this is not an issue, restart Sleipnir-app and memory is freed again. Also the restart does not loose any previous measurements unless wanted so this really is no issue. It takes a few seconds and no-one flies for 45 minutes straight anyway. More of a disturbance than issue really.

One real issue was however time-synchronization of pods, this did not work out-of-the box. What I did was simply reconfigured ntp-client on pod 2 from scratch and all is well. Time is now synchronized in few minutes after boot on pod 2 and it keeps synchronizing every minute after that. So, that was resolved also.

Easy, really easy. Let the software do it’s thing. Announces speed correctly every time and stores the flight-direction correctly every time, really robust and well-working solution. After the flights are done stop the cameras and click on the flight in log, adjust camera-frames if needed and read the speed. It really could not be any easier than this.

I wrote a small script asking for two speed-values for calculation of average for the Speed Cup I’m organizing in Finland this summer. It’s really easy and fast to choose fastest flight to both directions, adjust frames if needed, calculate the average and write it down. Real time results are always a good thing for participants. 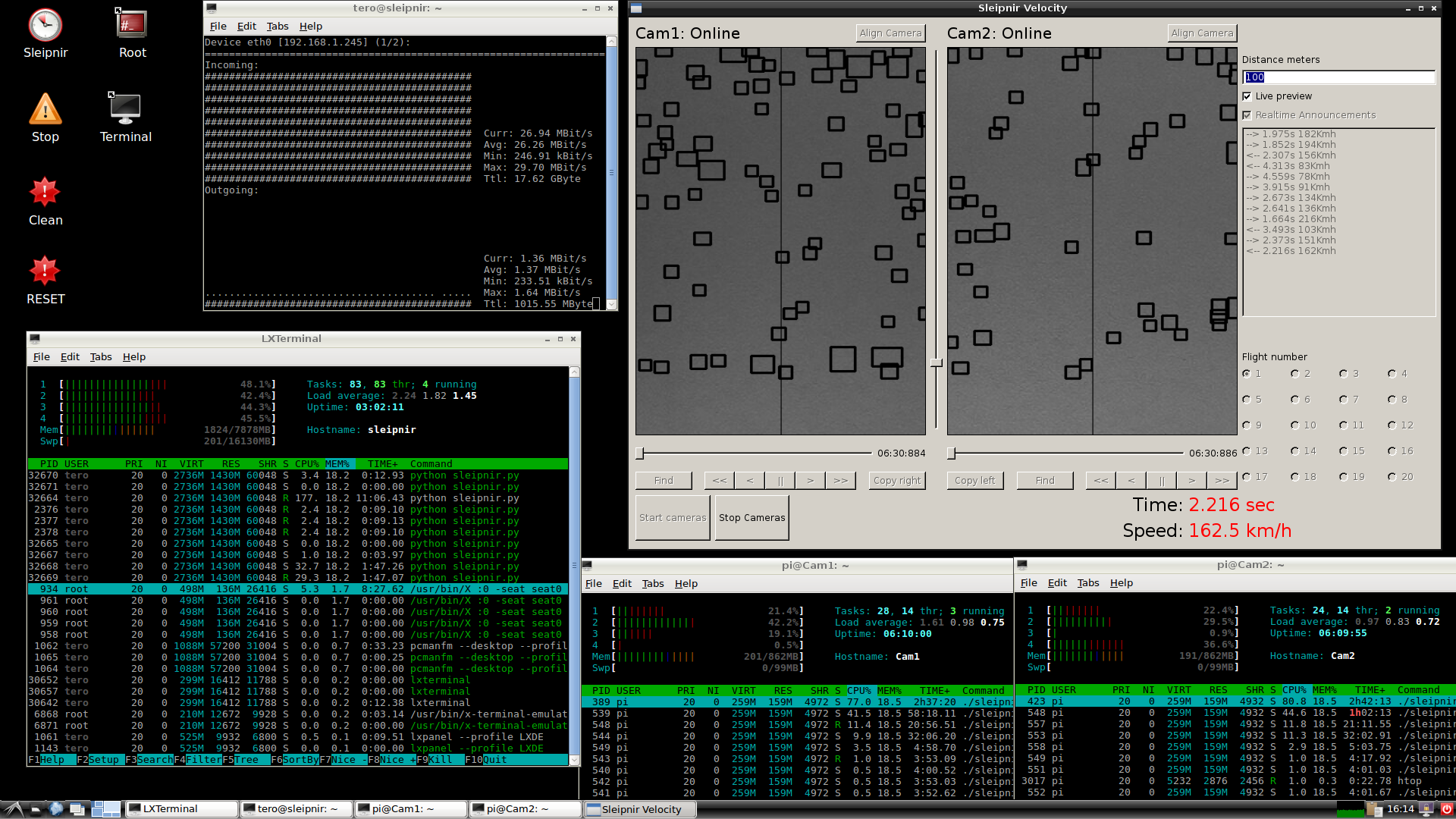 Pro’s and con’s on Sleipnir

Definite pro’s are the really simple and easy usability. Reliability is very high, if configured properly no issues that would risk running competitions etc. Also possibility to customize the look and feel is a plus, it really is not that hard.

However there is con’s also. One is that it is pretty demanding on hardware, does not run on old sluggish laptops. Also some might consider the need for linux to be a downside. Also it’s not plug’n’play but it’s questionable if that is an downside or a feature. I like tinkering so this does not bother me.

I’m a board-member in Finnish national RC-heli association called RC-Kopterit ry and I thought it would be cool to arrange a small cup-type thing around the speed-flying this summer. We have plans for five dates (four are confirmed already) with four classes. Classes are rc-heli’s over and under 500mm blades, nitro/gasser-helis and multi’s.

The goal is just to have fun, no entry-fees are needed. Winner in every class and date gets 10 points, second 9 points and so on, in the closing event on autumn the person with most points win’s cup in he’s class. Could not be easier. We’re also giving price to seasons fastest time recorded so this should be really fun.