Every year there’s the traditional springcamp in Paattinen RC-field next to Turku. Traditionally it’s in the end of may so this year it was the weekend of 22-24.5.2015.

The blue dot is Tampere where I live, and springcampwas held in Paattinen, left lowest red dot.

Last year we had temperatures well over 20 and I got fo course a “real good sunburn”. Well. Not this year.  Flyable weather on friday, really shitty weather on night and saturday morning. I slept in a tent and I can say with confidence never again… I got a real bad cold that night, I actually had to bail out on saturday and drive home. On the evening had a fever of well over 38 and lost my voice and so on.

But. Helis, yes those we had in the air. There was a really  frisky wind parallel to field anf that of course was only fun for my 500 TRex als called “raivoräksä”, freely translated to “maniac-trex”. Biggest pinion there is, flat 100% throttle-curve and +14,5 pitch. Pure fun :)

The Logo 800 was also in the air, last year I crashed it really hard when tail-gears melted. This year no problems whatsoever, just fun with about 40 other heli-nuts :)

Like picture says, weather wasn’t that good. Thankfully there was a sauna in the evening :) 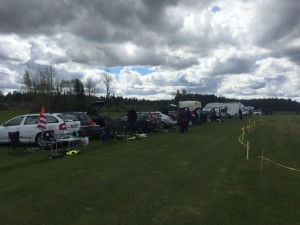 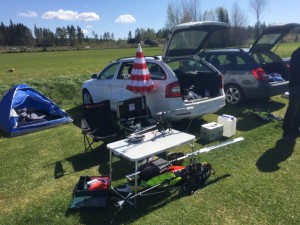 This was absolutely hilarious, three city-slickers putting up a surprisingly complicated tent no-one’s seen before… Too bad I didn’t get a picture in the beginning. Well, they got it up, all ended well :) 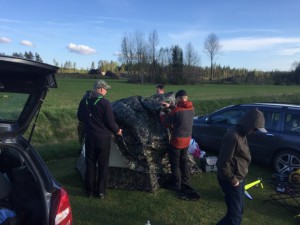 Two Logo’s in sunshine, one with “lowrider”-skids 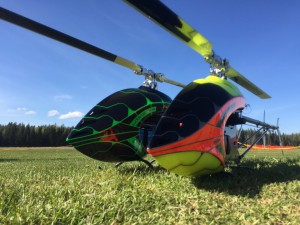 It’s hard work to take pictures for the blog…. 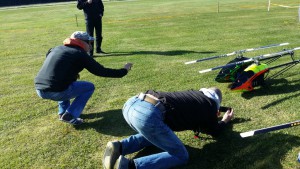 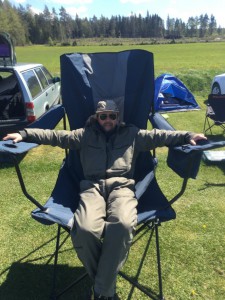 So once again, thanks JariN for a great camp!