Last year guys from Seinäjoki arranged a small meet called TEP Camp (TEP = Team Etelä-Pohjanmaa, translated Team South Ostrobothnia”). It was a small, cozy happening with a lot laughs and good time. Small means there was the “local guys” and only three “outsider’s” including me.

Location is the red dot right above blue dot, Tampere. Only 200 km, so pretty close.

One of the organizers, “Toeh” is pretty damn good with video’s, check the TEP Camp show reel:

This year the happening grew quite a lot, mostly due the FPV-racing but also CP-helis were represented with more visitors.

I had repaired both heli’s after last weekend’s crashes. TRex was a guick fix, new rear etc. Logo was a bit harder, new kit was needed, that means it was completely rebuilt.

TRex had a small glitch so it was quite expected to break. I said to everyone that if it hold’s for three flight’s I’ll buy Align’s stocks :) Weeell… No need for stocks :D

What really was not nice was the fact that Logo broke again. And once again, tail gears stripped. I also had a really bad luck with crash. Had the infamous “piro from hell” but this time i got it under control and did a beautiful autorotation to ground. I was already happy that “yes, I’m saving a thousand euros” until heli came to ground. The landing spot  was really uneven and of course there’s pretty much inertia in those 813 blades. So, heli tipped over, bent bladeholder (that’s a first), one blade went through tail tube cutting tube and tt-tube in half, broke strats and so on. Bent the main shaft also. And tail servo gears. (Futaba 255HV)

And yes. It’s the rear gears once again. I’m in middle of communicating with Mikado on this issue so there will be a lengthy post in the subject when we have some sort of solution. There’s some issues with manual, thruth, methods and shimming. But of more these in separate post.

We have great personality in Finland, nickname “Welho” (Wizard…). He’s pretty innovative, always doing fun stuff where thinking out-of-the-box is required . One of he’s project’s is the flying wing-drone. This will be flying autonomously and so on. What I really like in he’s stuff is the level on finish. Pretty much everything is thought of, great work. It was really fun to have chat with him for example on my charging case :) 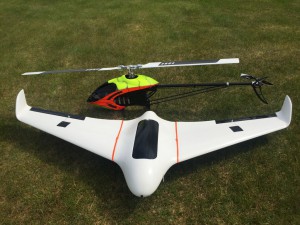 One really big part of the TEP Camp II was the FPV-racing guys had going on. Of course for us who flies the traditional helis this looks pretty funny :) 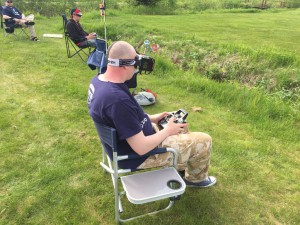 Apparently those small FPV-racer’s do not like to go into water, this is in the middle of “Operation Dry-Out” (The “Like”-stick is always handed to the guy who crashes, tradition on TEP Camp!) 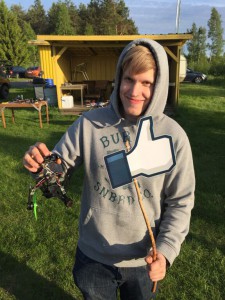 Welho tried my Cheerson CX-10, the micro quad. We laughed our asses off when it started to drift and I shouted to him “There’s limited range on the transmitter”. So the Cheerson did a small fly-away and Welho was running after, picture is from returning :) 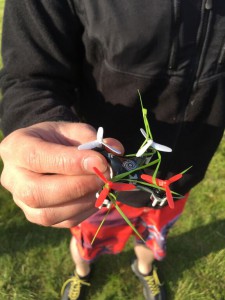 And lastly a video from Toeh of happenings during TEP Camp II, I’m the one with Jeti and Logo, too bad I only got one flight before the crash, we had some video-plans for the Logo. But we always have next year!