Last week Jetimodel sent me a small FedEx letter and while I knew the content it still was really exiting this time. Among other small things there was a pre-production version of MTAG, Jetimodels answer to RCT RFID-Sensor. Obviously a thorough look and some test’s had to be done. Usually a sensor is “just a sensor” but this one’s a bit special :)

Some time ago, I think it was a year or so ago, I was testing a beta-version of transmitter firmware. Along the update was a new device bin-file called MTAG.bin. I guessed right away what it was and sent mail to Jetimodel asking “Am I right, there’s a MTAG-file there…”. I liked the answer ,”You don’t miss much, do you”. So, now it’s time, let’s have a look! (Note that MTAG is pre-production model, packaging may change before release, I would guess it’s shrink-wrapped tho)

What is Jeti MTAG?

Jeti MTAG is a NFC-tag reader and writer. Operation is very, very similar as RCT RFID-Sensor. After doing a sensor-search in transmitters there is the usual suspects available as values:

All the values are familiar apart from the last one. The “Status” is “0” when no tag is close to sensor and “1” when it is. This is a clear suggestion that the value can be used for lua-apps. From top of my head I cannot find any other use. Before you start to write any comments like “yeah but couldn’t you just do like “if Batt ID exists”, well, no. MTAG shows the last read value after tag is removed, only the status is changing. (RCT RFID zeroes values in this case) So, the “Status” is useful.

When designing NFC/RFID-devices there’s some things to keep in mind, one of them is that the antenna needs to be in certain type and form, you cannot “just make some trace-loops” to PCB. Also you need to keep in mind that you cannot put any electronics inside or near the antenna. So, this leaves us with two basic routes, either you make one-plane PCB where some of circuits are outside the antenna and therefore make the PCB a bit bigger or make dual-PCB structure. Jetimodel chose the one-PCB route and looking at the PCB I have to say quite nicely planned PCB. The size is a bit bigger when comparing to the DIY-version: 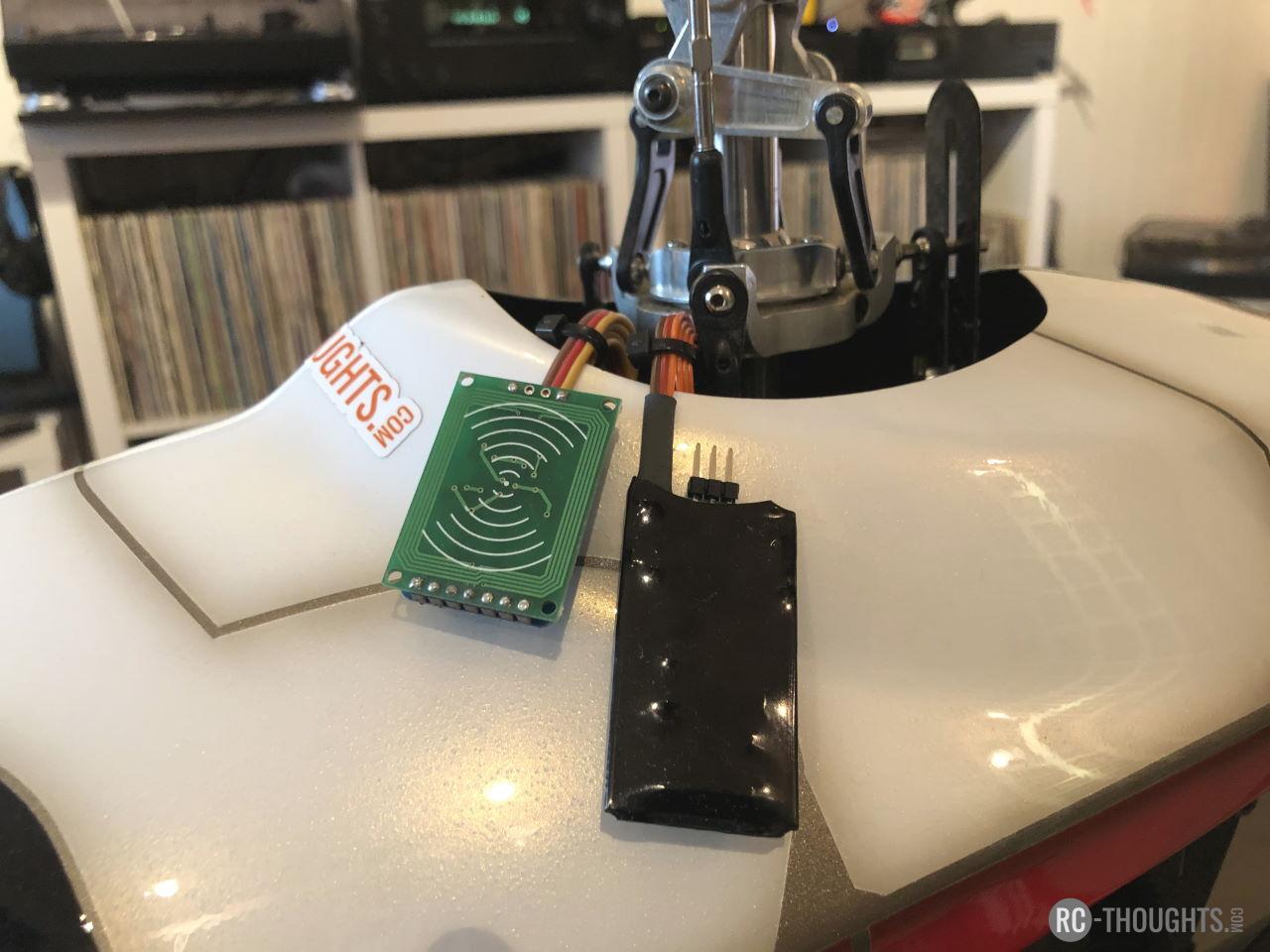 The size difference is really small. But have a look on the thickness: 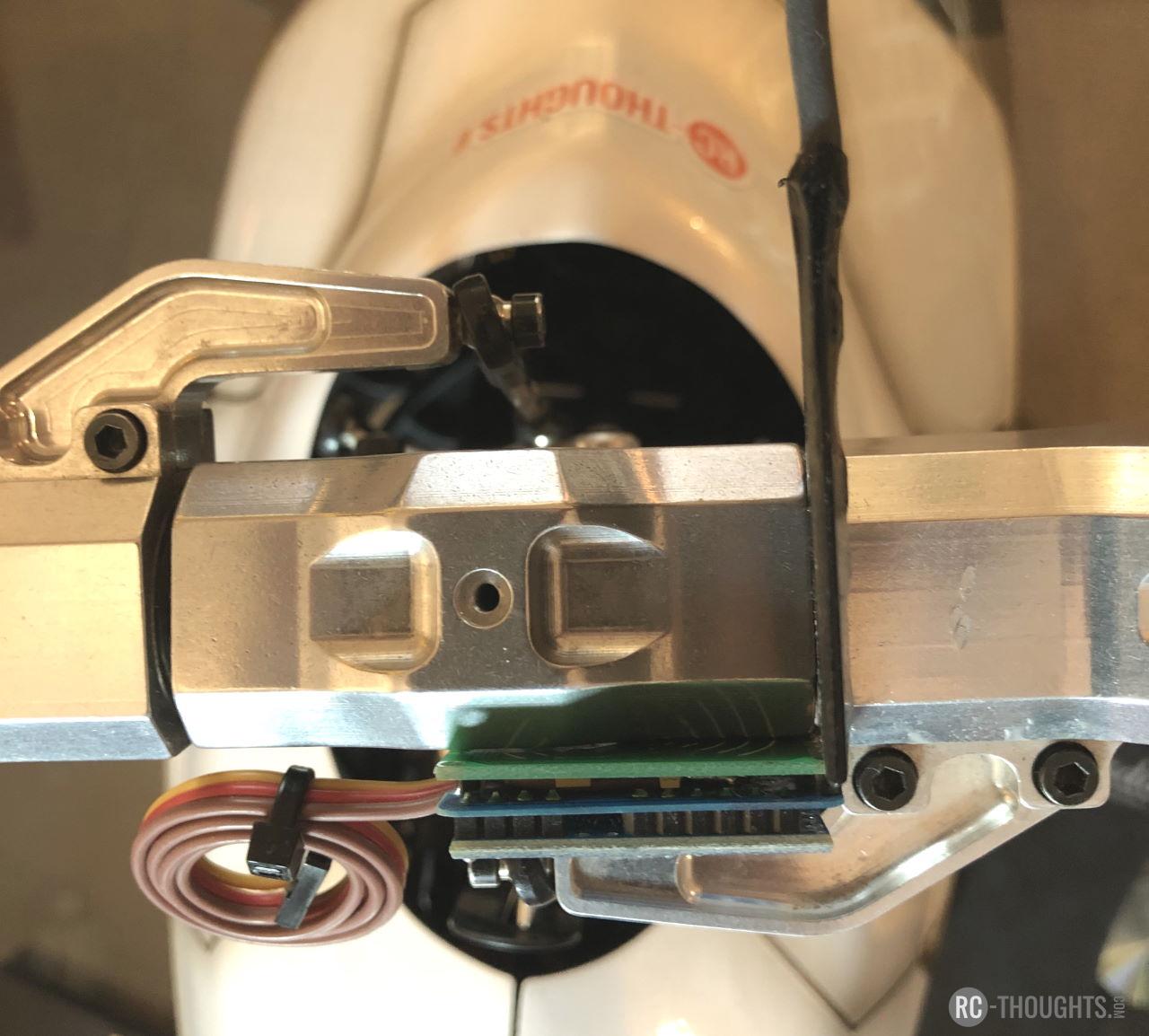 The multi-PCB approach has one disadvantage, in practice the battery and tag can be only on one side. The one-PCB solution can read the tag from both sides and this adds to versatility on installation. And it really is thin, the thickest part is where the EX-bus pins are and that’s 4.3mm, in general the PCB with components is ~3mm. Yes, you can daisy-chain sensors, works great.

Tags used are 13.56Mhz Mifare S50 1K, and if this sounds familiar you’re right, same as in the RTC RFID-Sensor. And here’s the bombshell: Jetimodel MTAG and RCT RFID-Sensor are fully compatible, both ways! So if you are a RCT RFID-Sensor user and get a new plane or heli you can get a MTAG and keep using the same tags and batteries. No need to start working with new tags!

You can write a tag with MTAG, read it with RCT RFID-Sensor and vice versa. Both sensors also read Revo Bumb tags! if this is not compatibility and manufacturers respect for open source guys I don’t know what is!

Another thing that we know is that Hacker Motor and Jetimodel are close and do a lot of communication. After I saw the MTAG.bin I knew right away what, and who is circling around :) It’s no surprise that Hacker Motor have a line of their TopFuel batteries available with MTAG-marking and tags. I sent a mail to Hacker Motor asking if the tag is in fixed position on the battery or if it’s possible for user to place it where users want’s but did not get an answer. When looking at all different positions and places how people install their batteries the tag cannot be fixed. On the other hand, if it is then just get tags from ebay and place where you want :) But I think the TopFuel MTAG-range of batteries is a nice touch.

It’s not known at the moment if Hacker Motor TopFuel batteries are compatible with RCT RFID-Sensor ie. if TopFuel tags are using the same memory-block in same way or not. We’ll just need to find out later on that one.

One thing where MTAG beats the RCT RFID-Sensor is the possibility for Jetimodel to use the closed part of telemetry-protocol and to use Device Esplorer. The latter is not possible for open source and this means either Jetibox-menus in transmitter (or Jetibox) or separate RFID-Programmer for writing tags. (Hint: RFID-Programmer is compatible with MTAG…)

Going to Device Explorer shows this: 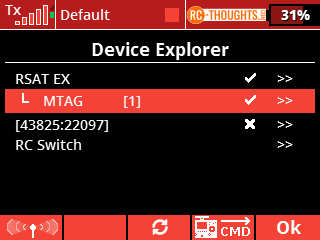 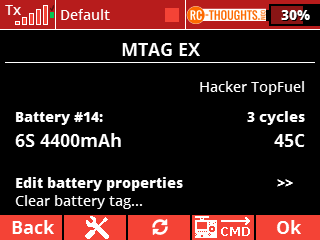 Selecting the “Edit battery properties” is a 3 screen menu: 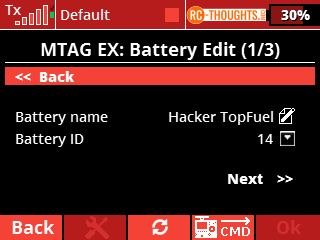 The name is also written to tag but it’s not used in telemetry since EX-protocol does not transfer text. All batteries should have a unique ID. 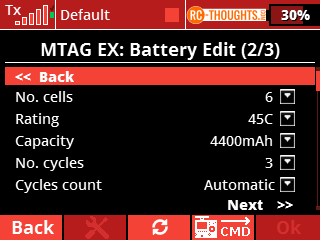 Settings are self-explanatory. The last one is also familiar, you have the option to select cycle count to be raised automatically with one 10 seconds after start or manually. The manually changed way is the device explorer. 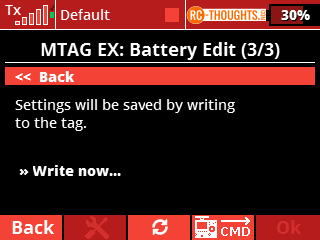 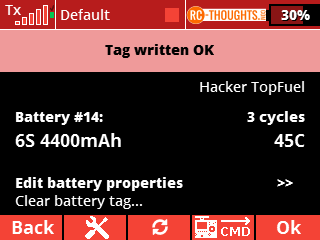 After writing now you are presented with a notification and you’re all set.

MTAG is a sensor, and of course it shows sensor-values. One nice touch I liked is the notification when battery is inserted: 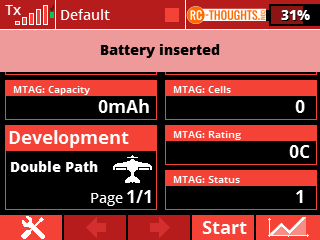 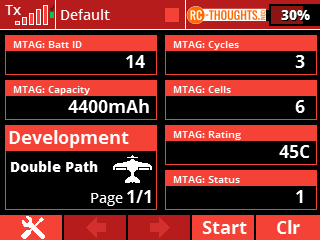 For more information-value and usage of the values themselves you could make lua work a bit for you. RCT RFID-Battery lua-app is fully compatible with MTAG straight out of the box: 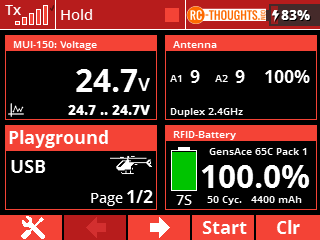 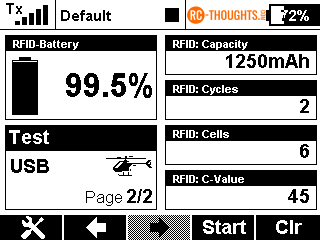 Or you can go wild and have some fun with full screen mayham and get some action fo MTAG & lua :

MTAG is a new addition to one of the best sensor-selections to a transmitter brands. I wonder if Jetimodel is not the brand having most sensors available of all?

After I did the RFID there were some comments like “it’s static info, it’s useless”. When I asked “would you not like to have automatic battery-logging of your expensive LiPo’s?” “The answer was “Yes”. So, it’s not useless ;) Add the fact that DS-12 just came out with enough power to drive all sort’s of lua on the color-screen….

And yes, I just have to add this. Jetimodel making a sensor where functions, a lot of tech like tag-memory block, tag compatibility and so on is based on the work I have done, well, it makes me a little bit proud. So thanks for this Jetimodel, nice work!

One thought on “Jeti MTAG – NFC For Masses”