I just added a nice feature to Jeti FuelSensor, you can now store consumed fuel (ml) and remaining tank-value (%) to memory between flights.

You connect a wire from Arduino to receivers one output defined as Digital Output. Make the output to be 100% and go to -100% when used.

After a flight let’s say you have consumed 1500ml and you have 50% fuel left. You then power off the model and after a while wan’t to do another flight. Since you still have enough fuel for a short flight you do not need to refuel.

Power up the model, your sensor will show 1500ml consumed and 50% left. After this flight you need to refill the tank, after refilling use a momentary switch for example to reset consumption to 0 and remaining fuel to 100%.

Updating from version 1.3 does not remove your previous calibration.

Could not be easier, check detailed connections and settings from FuelSensor-page here. :) 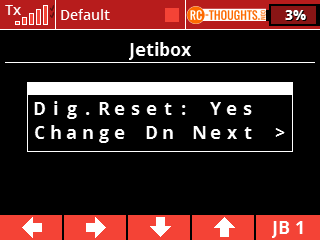