Difficulty in pairing Kontronik’s Bluetooth-module and iOS to understand each other. Kontronik’s manual is a bit vague on the subject, I’d like to go so far and say it’s wrong.

So, here’s the how-to, added with a warning.

Equipment used in this article

The order of things is specific, so follow this guide:

You’re done. Re-connect battery, start K-PROG or K-VIEW and enjoy. (Note: On one pairing occasion I had to repeat the process, it could be the “unit was paired before”-thing Kontronik is mentioning with android.)

What can you do with iOS and Kontronik Bluetooth?

You can (in theory) program ESC with your iOS-device with K-PROG-app. And after flight you can see statistics and so on with K-VIEW-app.

Works as it should, no issues there as can be seen in pictures below, click for larger version. I’ve used this before I became a Jeti + JLog-user, nice to look for high-values after flight.

The disturbing thing is, K-PROG does NOT WORK CORRECTLY! I’m strongly advising users not to use it until issues are sorted out by Kontronik!

Let’s have a look on my Kosmik’s settings: 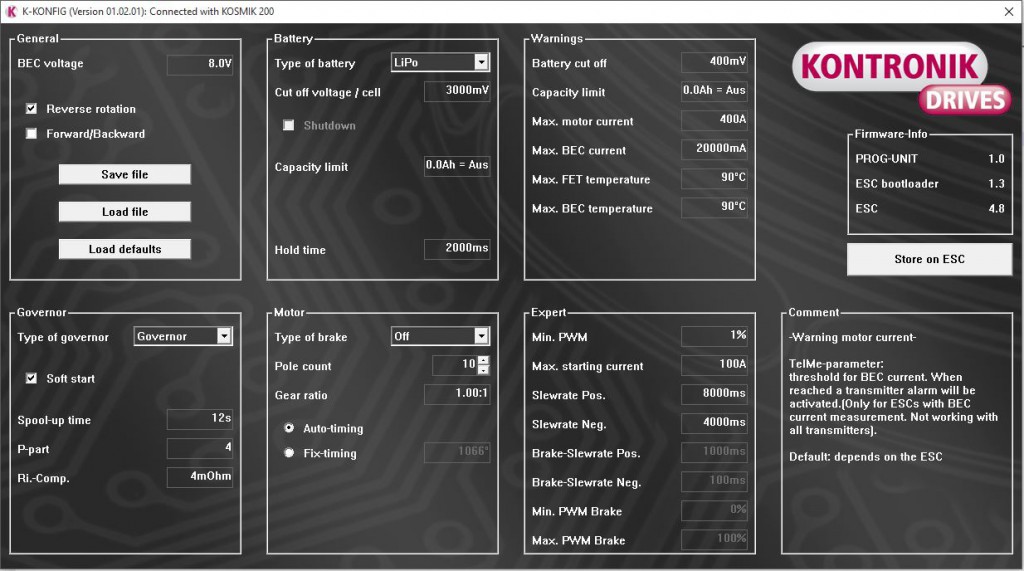 These settings do not always appear correctly on K-PROG! There is a risk of user in programming wrong values to wrong places. I tried this several times and could not find any logic to why and where in the app the error would show up. Update-frequency is a bit slow to start with which made things a bit harder to diagnose but anyway, if you have to use K-PROG make sure to check every value before quitting the app!

Screenshots of some of K-PROG screens below.

Bluntly put, this is messed up, and what’s most important, this might be outright dangerous. What is also interesting, this issue does not appear on any of my android-devices.

One thing to note also is that even if you need to specifically activate the programming mode in K-PROG there is one thing I do not like: Touch any of the input-boxes in the app and software goes automatically to programming mode. (ESC beeps and app’s first-page “Programming mode”-button is activated.) In my opinion this might be a hazardous thing, it is after all a touchscreen-device where we users occasionally touch wrong things.

For programming, ProgUNIT is still golden, you need it anyway to update the ESC. Or an Android until Kontronik get’s this fixed. K-VIEW works as it should. If you are a iOS-only user you should consider the benefit’s of the bluetooth-module, that is up to you. I do believe Kontronik will fix these issues eventually. It only took them about a year to get the iOS-versions out after they pulled previous from app-store. By the way, the old version worked…

As usual, any questions, drop me a line!

Kontronik contacted me today due this story and they are very interested in my findings about the errors in K-PROG. Also the annoyance of auto-entering program mode will be fixed. I’m helping them in any way I can, stay tuned!