I have to say Jetimodel is active regarding updates. What I really like they are actually listening what happens out on the fields with their equipment and add functions accordingly. This is once again something that really keeps me with my DS-16 and protects me from looking at (for example) Futaba 18MZ/SZ, Spektrum DX18, JR28X or whatever.

Equipment used in this write-up:

As usual, installation is easy. In a nutshell:

Some precautions as always!

As usual some improvements. some fixes and some totally new functions. Let’s look what’s new, that was quite a lot:

As usual, no firmware-release without modifications:

There you have it. Quite a lot, let’s dissect some of these a bit more.

Yes, it is true. DC/DS-16 now has true 24 channels, all proportional and programmable channels. How this works is that you now can install multiple central boxes or receivers into a model and use all the 24 channels independently just as before with 16. There is however two really important notes on this:

I really do not see the latter to be a problem. Every Jeti user has a J-USBA adapter, right?

By default the function is off, activates automatically when a servo is activated to channels 17-24 or if you activate it from Advanced properties -> Wireless modes/trainer.

Well. It is proportional, what this means is more different font-sizes.  Check out the old and new screens: 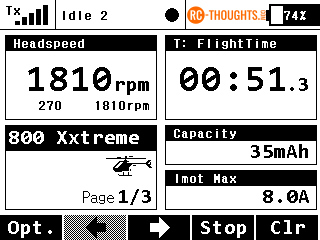 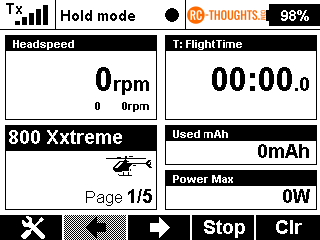 I have to admit this is better but it is not all glory here. When we are talking about visual things we do have to remember it is always in the watchers eyes. So here’s my rambling:

Menu font is WAY TOO BIG. I’m not twenty anymore and have glasses but seriously? 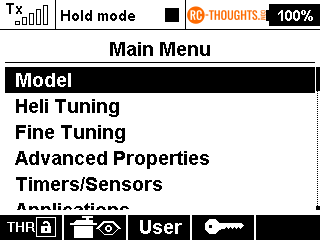 How about making this editable by user? ;)

This is done (in my non-multi eyes) pretty good and versatile. In the wizard you can choose between no camera gimbal, 2-axis gimbal and 3-axis gimbal. Also up to 3 functions for different gyro or stabilization functions and amount of gear servos.

How cool would it be to make transmitter point out with a voice of Marilyn Monroe that “PLease baby, don’t leave me alone” when not used for like ten minutes… :) Now it’s possible.

The usefulness of this is of course debatable, some want or need it, some do not. Personally I do not, I have the 5200mAh LiIon battery in the radio and never shut down radio while on the field. This would just annoy me. I did love the function in my DX9 back in the days so I do see the benefit.

There’s been quite a lot debate on radio-link quality in U.S. with Jeti. To summarize it it looks like there is a place where there is a lot of “signal pollution” in 2.4Ghz range and for some reason Jeti is affected more than some other brands. I’m sure people flying in that area like this function. It is now possible to make a voice-alarm when Q-value drops to pre-chosen value. Very good for all of us, a function that actually might save a model! Safety first, as always!

Now this is interesting. We can assign (for example) a 3-way momentary switch (usually in the middle, momentary up or down) to make a complete and controllable “fly to music”-scenario.

Let’s say you want  to practise a program with heli-acrobatic to music on the field. We would make a folder to SD-card with name of “Routine”. In this folder we would name the files like

Of course this is an example. When you have flown the routine 1 you could flip the switch to next routine, transmitter would call out the routine by saying “Funnel right, tail up” and play the music. And so on.

What’s important is the naming of audio-files, I’d suggest you to use naming them with leading numbers so order of files is kept organized.

Definitely something I need to play with :)

This is a great add-on, there is a catch tho. Let’s say you have a normal dementia like I do, you sometimes try to take off with a model with already used batteries. Happened to me quite often so I did my own pre-flight check to prevent this. (Read more here)

Now Jeti have added a warning just to prevent this, using the function is simple, make a new alarm and tick the box “Use only during preflight check”.

Simple? Well, yes and no. The problem still lies in the fact that preflight check only occurs when a) model is changed or b) transmitter is powered on. So for guys like me who usually a) often does several flight with same model and b) never turns off the transmitter this just do not work. So I’m not giving up “my own” flat-battery alarm just yet.

Nevertheless, great and really useful function once again from Jeti.

This is quite interesting. Let’s say on a flip of a switch you want several telemetry-values be spoken out loud to you. Now you can do exactly that, flip a switch and hear for example “Speed one hundred miles per hour, battery capacity two thousand milliamphours, signal quality ninetynine percent” or what ever you want to be spoken. Almost.

What you actually can use are:

You CAN revert to FW 3.02 if you for some crazy reason would want to. You CAN’T revert to earlier than FW 3.02.

If you have throttle channels servo throw reversed you MUST check the digital idle trim-function! (Go to Fine tuning -> Digital trim and fix it!)

Well. Shortly put, usual Jeti-quality. I’m not afraid to say the negative things also but so far everything “just works”, pretty much this is usually the case with Jeti updates. Regarding the Jeti vs. UDI-protocol problems they are fixed with REX-receivers new firmware. There is a separate article on this coming up with oscilloscope analysis on both firmware 1.00 and 1.01 in REX receivers.

Future looks bright for Jeti for sure! :)